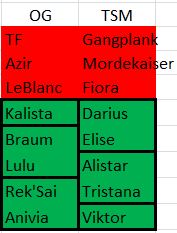 So Day 3 seems to be when teams finally diverge away from the same “OP” bans every game and we start to see team-specific strategy. OG knows TSM is the Bjergsen show and banned out his top picks. Its curious that TSM chose to ban Fiora and took Darius in their 1st round of picks when Darius hasn’t been the most effective champion and has proven to be minimized by Gnar or Renekton. Of course TSM would save their last pick to counter mid rather than top, but banning Darius and picking Fiora leaves fewer counters assuming Dyrus can play Fiora. Also, for the 1st time Lulu is actually flexed, she goes Top Lane. While it is scary to blind-pick Anivia, with LeBlanc banned its not as risky of a pick anymore. OG already see the majority of TSM’s comp and can see their only real engage is Alistar. Anivia’s zone control kites Darius and her wall can prevent Alistar from ever engaging. Seems like a very smart defensive pick for OG.

OG certainly out-drafted TSM, but TSM’s continually weak early and mid game prove to be their downfall. Its no secret that TSM has the longest average game time and this usually occurs because they’re stagnant early and mid game, choosing just to farm lanes. They make no proactive plays, don’t get any wards past river, don’t gank, don’t roam, and rarely lane swap. TSM actually had a good start to the game; they got the lane swap as desired, but Dyrus only double jungled for 2 camps then tried to lane against 2 with a potential 4-man tower dive. He got zoned away from tower and wasted a lot of time. Against a team with Lulu as their double jungle, he could’ve easily kept jungling with Santorin with much faster clear then came to help fast push towers with his Bot Lane. They still got the early tower advantage and continued this at ~10 minutes when they got the 2nd outer turret compared to OG having 0 towers taken. OG made a great call to take dragon while TSM recalled after taking their 2nd tower which helped them snowball their comp. Most teams like CLG would’ve sent their Bot Lane middle to take the final outer turret, but not TSM. They continued to farm side lanes and play safe for the next 10-15 minutes rather than press their advantage. This lull in action allowed OG to get 3 outer towers and 2 dragons while TSM stayed stagnant with still only 2 towers taken. They failed to make use of Tristana’s strong sieging and allowed OG to pull ahead and Anivia to get farmed. TSM rarely get deep vision past the river because Santorin and Lustboy never pair up to do it. This means they don’t know where the enemy Jungler is and can’t make plays accordingly. TSM should’ve used their early advantage and invaded the enemy jungle allowing for an easier siege on mid outer tower with possible flanks. Anivia has an incredibly weak early game where she doesn’t have the items to wave clear yet. TSM should’ve also invaded the enemy jungle to steal away blue buffs – denying xPeke from free farming mid and stacking up Tears and ROA. If TSM was able to deny blue buffs and get them onto Bjergsen, he wouldn’t need to buy Morellonomicon 1st item and build straight damage for an even bigger advantage mid game while Anivia was still trying to scale. I like the Anivia pick, but I feel it works specifically against TSM due to their weak early and mid game. They don’t punish a pick that needs lots of resources to scale. Between minutes 11-24, OG managed to get 4 towers and 3 dragons despite TSM having a 2 tower lead. Its as if they just stopped trying and just auto-piloted to farming. OG did a good job of playing to their strengths; establishing vision control and getting to objectives first allowed them to use their strong zone control with Anivia to secure the objectives. OG makes good use of their advantage mid game and never let go of vision control around baron. TSM eventually gets choked out then make poor desperation plays. The fight at ~26 minutes was the most glaring this game as TSM attempted to force a fight around baron by engaging onto Braum that’s paired with a Kalista. They chose to engage without WildTurtle present and Soaz teleporting in for a 4v5 fight. They blew Alistar combo, Darius E, and Elise cocoon on Mithy who simply got pulled out by Kalista then thrown into TSM with no means of disengage. This makes 2 games in a row where TSM forced a fight around baron and made poor target selection calls that got them aced. OG played great with the gifts they were given (TSM not pushing any mid game advantage) and capitalized with great zone control around objectives leading to their victory. They had great side wave management and Soaz did a great job of split pushing. While OG did have double TP, xPeke used his TP exclusively to keep returning mid lane without getting punished in farm. The wave management allowed them to get repeated dragons and towers throughout mid game. A small note I wanted to make is that OG is the only team that’s run double AP comps. Every team has stuck to juggernauts or tanks, but Soaz’s broad champion pool gives OG more comps to work with, so props to them for being unique and pulling it off well. I do think OG have played well so far at Worlds, but both opponents have made glaring mistakes in-game with poor target selection in team fights. OG has also out-drafted both opponents.

There weren’t many fights this game and the few that occurred were very one-sided so take these numbers with a grain of salt. Dyrus had the lowest contribution of anyone, but I wouldn’t place all the blame on him – the comp OG constructed countered Darius hard, he was zoned out of fights and TSM had no way of engaging to help him out. I’m not sure when TSM did their damage this game because there were so few fights and mostly just someone getting caught out (most notably Lustboy, seems to be a trend). Bjergsen was again the heavy favorite in damage dealt, but I feel it was mostly done in lane trying to bully xPeke.

TSM places many wards, but it never feels like they have vision control. Almost all of their wards are defensive and rarely get past river. Once OG got a lead, they never let go of vision control around baron and in TSM’s jungle allowing them to freely rotate to take towers then bait baron.