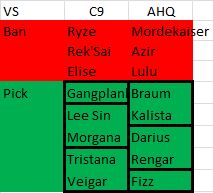 AHQ formed a heavy dive, aggressive pick comp, but with 4 melee champions, C9’s strong zone control from Veigar, Gangplank, and Morgana counters AHQ quite well. Rengar is certainly a risky pick, but AHQ didn’t have to go for a pick comp because at the time he was picked Kalista/Braum could fit any comp and Darius is a solid top laner. The Rengar pick forced AHQ to go full aggression. I understand having 3 Junglers taken away hurts, especially Elise and Lee Sin who are the strong early game duelers, but picks like Gragas/Ekko that Mountain is fond of could’ve worked out as well. Veigar is weak against assassins, but I’m not convinced Fizz was the best choice. I understand it’s a favorite of Westdoor, but a ranged assassin like LeBlanc/Ahri probably would’ve worked better and provided more wave clear. I think Veigar is still a risky pick especially blind-picked mid; however, AHQ didn’t do much to punish it. Veigar seems like a good secondary option to Azir to stop melee heavy comps from engaging. Tristana was a great pick-up for C9 giving the team strong pushing ability against a team with no wave clear.

AHQ had a good start to the game, but failed to snowball mid game leading to an extremely quick end to the game. Hai’s Lee Sin had little impact on the early game and spent a lot of time babysitting Veigar mid. It was a good move to ensure Veigar could farm to be relevant mid to late game, but it also allowed Darius to go unchecked. Mountain’s Rengar meanwhile power farmed very efficiently, hit 6 before Lee Sin, and had a successful 1st gank. The fact that Fizz got 1st blood along with Veigar dying was an ideal scenario to get AHQ ahead, but subsequent failed ganks meant AHQ would fall too far behind. The early lane swap favored AHQ and allowed Darius to farm and get solo xp. After C9 lane swapped back to normal lanes at around 5 minutes in, Balls had to play the rest of the game from behind with no help from Hai. He did a good job managing the lane and farming safely while the rest of the team gained advantages. Besides dying to Westdoor’s Fizz solo kill, Balls managed the game well and contributed to every fight with his ultimate. Having standard 2v2 lane bot favored C9 heavily. Despite going even in CS, C9’s Bot Lane was able to take the 1st turret of the game by simply pushing 2v2 then rotated mid to apply pressure against a Fizz who cannot wave clear. Mountain failed to snowball any lanes with questionable uses of his ult and Darius/Fizz weren’t able to win solo match-ups hard enough. This, along with Sneaky’s Tristana fast tower pushing and AHQ lack of wave clear, spiraled the game quickly out of control. AHQ made a lot of questionable calls for rotations – losing mid outer tower with only Kalista/Braum defending; trying to split push while C9 has baron buff. AHQ was never able to get ahead to split push effectively despite having advantages on both solo laners. AHQ’s questionable drafting and failure to snowball mid game lead to their defeat.

Gold distribution shows C9 put emphasis on its carries while AHQ spread it among the carries + Jungler with emphasis on their solo lanes. Kalista had as much gold as the Jungler; evident when I noted mid game (~17 min) where AHQ camped hoping for picks putting them even further behind. Kalista’s lack of gold meant she couldn’t afford Hurricane which the team desperately needed for some wave clear.

The carries of C9 shined as they should with Sneaky leading the way. I was surprised by Balls’ damage output since he wasn’t able to participate in many fights and only contributed his ult. The fact that Darius’ damage output was so low shows how ineffective he was despite his advantage in lane. Not building DMP and with no reliable engage on the team, AHQ got kited around without being able to deal damage. In the major team-fight at ~21 min, he was also caught out and killed without using any abilities. Braum dealing more damage than Rengar and almost as much as Darius further demonstrates AHQ’s inability to use their comp effectively.

Not much to discuss, but I wanted to note the amount of pink wards purchased by C9. C9 purchased 11 vs 10 by AHQ, but 5 on AHQ were from the Support Albis. Meanwhile C9 spread it out to about 2 pink wards each for a more team effort that proved crucial when playing against Rengar. The pink ward that spotted Rengar after C9 sieged mid inhibitor turret was placed by Sneaky. Good team effort by Cloud9.

Statistics pulled from leagueoflegends.com match history and gamesoflegends.com. All credit goes to them.