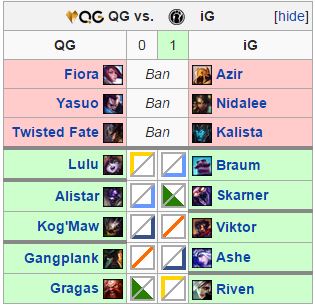 This will be a fairly straight-forward article and may seem like common sense, but I just wanted to outline general pick/ban strategies for professional League of Legends. With many teams scrutinized for their pick/ban and the argument that teams may have lost at champion select, I think its important to note what strategies should be used when teams enter the pick/ban phase.

Overall, there are four general strategies when teams select bans. Strategies can use any combination of the four with some overlapping. Of course teams will always adjust depending on player champion pools and teams may have a specific strategy going into games that we the audience are unaware of, so take these broad statements with a grain of salt. These strategies are:

Banning OP champions is the most common strategy we see, even being prevalent in solo queue. Within any given meta, there are always a handful of champions that stand out above the rest that teams just do not want to deal with. Unfortunately, the current meta has a large amount of strong picks making this strategy a bit difficult to pinpoint. Under this tactic, no strategy is given away to the other team of what team comp you want to run. I’d also like to note something I see teams rarely take advantage of; the order of bans should also be considered. Teams should be prepared enough to know what bans they will do going into a match, but the order of the bans could put some doubt in the opponents. If I’m on a team where my ADC cannot play Kalista so I know we’re going to ban it on blue side, I would save the Kalista ban for last just in case the enemy team decides to ban Kalista for us. While a very minor issue and with pros being able to have inside knowledge from scrims, its still something worth considering since there’s no downside to it.

Before discussing bans against certain team comps, I want to briefly explain the few basic team comps pros use.

With these basic comps in mind, banning out certain comps which a team may be strong running is certainly a viable strategy. Its important to note that you don’t have to ban out the entire comp, but a few key bans will do the job. For example, banning out Kog’Maw or Lulu alone is usually enough to prevent teams from running the Juggermaw strategy.

Target bans are always interesting. Teams should scout their opponents champion pools and ban accordingly. It may not be necessary to ban certain OP champs if you know the enemy doesn’t play them. Scouting should also note which champions a player favors and what they play when its banned. A strategy to ban out their strongest pick and then 1st pick their 2nd best champion can put players with small champion pools out of their comfort zone. This strategy is great when targeting one player with a small champion pool. Also, many times we’ll see new bans due to a champion’s success in scrims. We the audience are unaware of these situations, but I’m always hesitant when seeing these bans. Its common knowledge that many players perform well in scrims, but may not be able to translate it on stage. Players like Liquid’s Fenix and Roccat’s Nukeduck were guilty of this. While it may be risky, I’d be hesitant to use a ban based on scrims – forcing the opponent to prove on stage they can play a new pick at a high level. In the NA Summer playoffs, Gravity banned Diana against TSM in the first two games and in game 3 when she was free, TSM didn’t even pick her. I love seeing specific strategies being brought out against teams rather than the generic blanket bans of the same OP champions.

A similar strategy is to ban champions for a certain position. This is most commonly seen against the Jungler position due to the relatively small champion pool of viable champions. While this strategy hurts both teams, one player may be stronger or more comfortable at 2nd tier picks than the other. This strategy also usually targets a specific niche within the position for example banning out all tank junglers. This forces both teams to adjust their team comps or at least change their build paths to account for this. This strategy is also player specific, but can definitely catch opponents off guard.

Champions with versatility/flexibility thrive in LoL. The rule “jack of all trades, master of none” does not apply. Having a diverse kit or being able to play multiple roles on a team is generally what makes top picks stand above the rest. These champions can fit in a wide variety of team comps making it difficult to predict what team comp is forming. The flexible picks make it difficult to counter pick due to being able to be effective in multiple positions. The prime example of this is Lulu who is a good solo laner top or mid, but also can be played support. A prime example of this in the current meta is the combination of Lulu and Gangplank. Both are flexible in that they can be run mid or top with about the same effectiveness. For a great example of how this can be taken advantage of in pick/ban, watch the Round 2 Loser’s bracket match in the LPL regional qualifier where QG faced against IG Game 1. QG was able to pick up both Lulu and Gangplank with IG having last pick. Even with the entire comp drafted, IG was unable to distinguish who the solo laners would be and used the last pick (known as the counter pick) on Riven hoping to match up against GP. QG simply ran Lulu top and Gangplank mid to prevent this match-up. (photo credit goes to lol.esportspedia.com)

Taking into account champion versatility and flexibility, early draft picks tend to be generic and safe picks. This usually means picks for the Jungler or Support position. These positions aren’t commonly banned in the current meta and the top picks like Elise/Gragas or Alistar/Braum can fit in almost any team composition making them safe to pick early without giving too much away. Typically the Jungler, ADC, and Support positions are picked first leaving the solo laners last for potential counter picks. Its also important to keep in mind lane swap scenarios which can help out against bad lane match-ups. The solo laners also are a bigger indicator of what team comp is being formed, so holding off as long as possible is beneficial to the team.

Pick/ban strategies also change whether on blue or red side. On blue side, since you have first overall pick, teams may direct the ban phase into leaving up 2 strong picks at their last ban. This leaves red side in a situation of having to ban one of them and giving away the lesser of two evils or leaving both up where blue gets priority. The downside of blue side is you eventually have to blind pick one of the solo lanes. Very few champions are safe enough to be blind picked with few counter picks available, making them highly valuable to teams. Examples of these champions are Orianna or Ahri mid who can lane fine against almost any match-up and there isn’t a specific champion that shuts them down. While these champions may not flat out win their lane, they’re valuable on blue side because of having no bad match-ups. Most popular mid laners in the current meta can be blind picked with relative safely such as Azir, Viktor, Lulu, or Orianna who can handle their own even against assassins. Top laners don’t really have this luxury having a much wider variety of champions. Gangplank might be the only safe pick since tanks and bruisers usually have more glaring weaknesses. Examples of this would be Gnar into Maokai. Because of this, I expect Top Laners to be picked last in draft at Worlds to allow for counter picks. Of course lane swaps will play a role, but eventually lanes go back to standard.

On red side, a strategy used may be to leave up multiple strong picks, banning other champions. This allows blue side to only get one in their first in exchange for two strong picks on red side. Most notable on red side is having last pick, allowing your team to counter pick either of the solo laners left up. I suspect in the current meta that this last pick should be saved for Top Laners since their champion pool is a lot more volatile than mid.