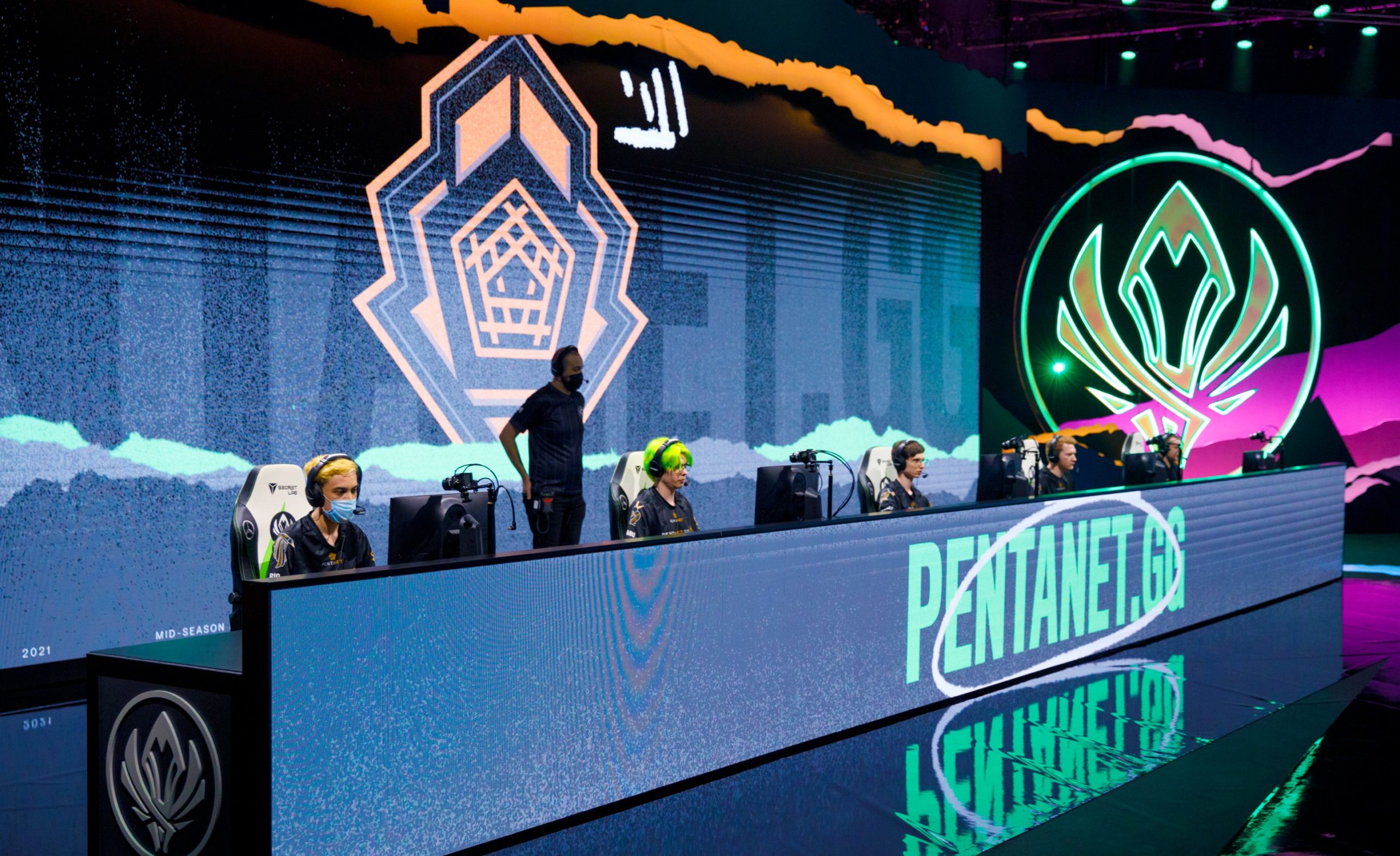 Day four of the 2021 League of Legends Mid-Season Invitational was all about Group A. In traditional fashion for international tournaments, the second round robin presents opportunities for teams to play all of their remaining group stage games throughout the course of a single day.

Today, after six games featuring the same three teams, we finally have our first two teams that will be advancing to the new-for-2021 rumble stage: Royal Never Give Up and PentanetGG. But beyond the results column, the second half of the group stage is already setting the stage for the rest of the tournament.

Here are the biggest storylines and takeaways from the fourth day of MSI 2021.

Pentanet made history as the first team from Oceania to advance past the group stage at an international event.

The team’s jungler Pabu played hero on day four, posting a 3.0 KDA on the day while serving as a major factor across all of Pentanet’s wins. Pabu has already showcased the countless champions found within his champion ocean. He’s played eight different champions across Pentanet’s nine games. After kicking off the tournament with a bizarre Fiddlesticks pick against RNG, he finished off Pentanet’s group stage run with an unconventional Karthus pick.

But for Pabu and Pentanet, the road only gets tougher from here. While spirits are high across Oceania, the harsh truth of what’s waiting for Pentanet in the rumble stage is going to set in deep over the course of the next two days. If the group stage continues to play out as it has so far, teams like MAD Lions and DWG KIA will be standing at the ready, presenting a whole new challenge for the Oceanic champs.

It’s going to take a lot more than a handful of wins over minor region counterparts like UOL if Pentanet are going to leave an even bigger dent in MSI. But at the very least, Pentanet has etched itself into professional League history forever.

Everyone knew Royal Never Give Up would have an especially straightforward road to the rumble stage considering the difference in caliber between themselves and their two group stage opponents.

Perhaps the biggest contributor throughout RNG’s (perfect) group stage run was the team’s top laner Xiaohu. The longtime veteran put up a 6.6 KDA across his seven games as a top laner and a scoreline of 13/0/3 in his lone performance as a mid laner during the group stage. His mid lane outing today served as a respectable tribute to his five years spent as RNG’s rock in the mid lane before a role swap prior to the 2021 season. Additionally, today’s game saw Xiaohu pick Ryze, the champion he played the most games during RNG’s MSI 2018 championship run. Maybe there’s a bit of poetry there, but it’s more likely to be a pure coincidence considering Ryze is Xiaohu’s most played champion of all time.

Additionally, RNG became the first team since SK Telecom in 2015 to go undefeated at the MSI group stage. Granted, SKT marked up its accomplishment by defeating five other major region squads, but the feat goes into the history books all the same.

RNG’s strong run through the group stage only included highlights from wins over two teams, but there were still plenty of reasons to be hyped about a team that appears to be clicking on all cylinders heading into the all-important rumble stage. Next week, the mechanically impressive RNG will find themselves matched up against the best teams that the tournament—and by proxy, the world—has to offer.

The only question mark going into the rumble stage for RNG is how well the team can transition into matchups with far more qualified and experienced opponents. After having their way with some of MSI’s lesser competitors for the last week, RNG fans can only hope that other major region teams don’t sneak up like some sort of culture shock.

Unicorns of Love go home with a lot to think about

It’s going to be a long ride home for the Unicorns of Love. After securing a dominant, incredibly convincing win over Pentanet early on day four, the team floundered about, losing its final two contests of the day to RNG and once again, Pentanet. UOL were in prime position to close out the day and advance to the rumble stage once the team had gained control over its own destiny. But the Oceanic squad caught fire at the end of the day, notching two straight victories over the Unicorns and sending the LCL representatives packing.

Considering the early woes of Pentanet and how exploitable the team looked on the first day of the tournament, UOL should have been able to find more than two wins against a team they’d proven to have their way with during their two victories earlier in the group stage. UOL beat Pentanet twice by a combined kill score of 23-4, an average gold differential of 11,000, all while outscoring them in the tower department by a mark of 17-2, according to League stats site Games of Legends. To crumble before the finish line after performances like those is borderline inexcusable.

Losses against beatable teams always hang over the squad that comes out on the losing end, and now, UOL will have to reassess their strategy going into the second half of the season earlier than they might have anticipated. For them, getting to Worlds needs to be the only goal. A shot at redemption on the international stage later this year will be the only sufficient medicine after a collapse like this.