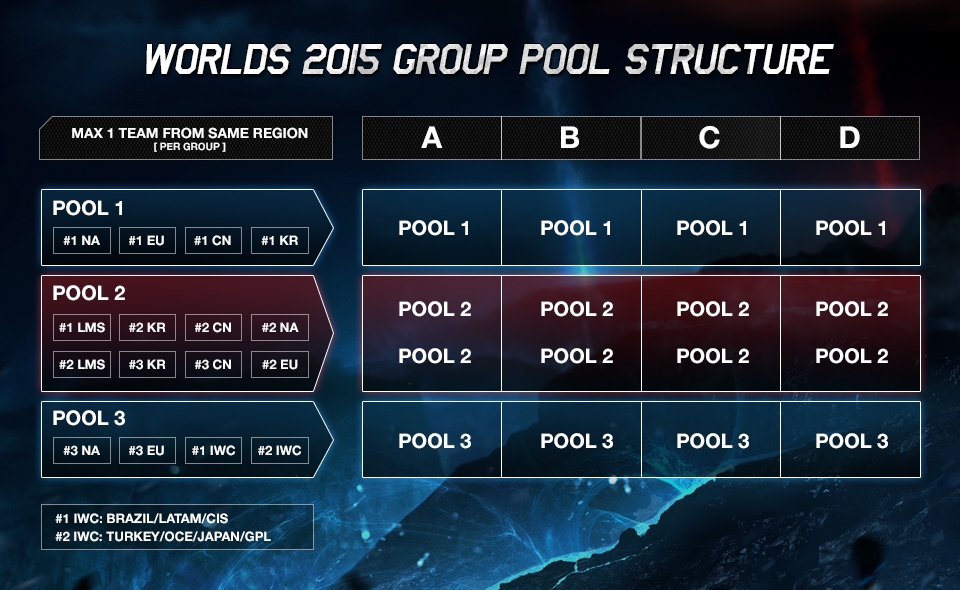 In a few days, the 2015 Rugby World Cup will kick off. Just like the League of Legends World Championships, the teams are initially split into groups, and two teams will advance from each group.

Another similarity is the fact that some of the groups are monumentally more difficult than others. Group A of the Rugby World Cup places three teams that are genuinely good enough to make the final in the same group. Pools B and C have only one top-class outfit – South Africa and New Zealand – while the second-seeded teams in each group would be expected to finish fourth if placed into group A.

Of course, this isn’t the only such instance of uneven group arrangements in world championships. ‘Groups of Death’ are a regular occurrence at such competitions. There are always stronger and weaker groups; these narratives add to the beauty of such tournaments. However, there has been significant outcry against the way in which the League of Legend World Championship groups panned out. Popular e-sports journalist Thoorin tweeted:

“It is a fucking joke that you can have a group like D, though. What a terribly flawed system.”

Is it really a flawed system? Or is it just part-and-parcel of a random draw?

My answer is ‘yes’ to both of the above questions. Yes, the system is flawed in that it will never provide a truly even set of groups. However, I also believe that there is no true way of seeding teams in a way that ensures there is always an even spread of teams across the groups, nor should there be.

The format of the World Championships draw. (picture via lolesports.com)

No logical seeding system could, or should, be able to account for the fact that the second best team in Europe only arrived in the EU LCS half-way through the year. Neither can a system account for the improvement of one scene, such as LMS, or the decline of another – NA LCS.

Last World Championships, EU and NA appeared to be roughly comparable, and LMS arguably sat a touch below them in terms of quality. This year, it would appear that Europe and LMS are of a similar level, while NA has assumed LMS’s previous position of inferiority.

Herein lies another significant problem with seeding the World Championships: How can one know who the best 16 teams in the world actually are if the different regions barely ever play against each other? In fact, are the World Championships meant to be the best 16 teams in the world at all? I think it is safe to say that teams like Snake E-sports and Vici Gaming are comfortably better than the Bangkok Titans, and I am certain that Riot knows this too.

While there may be fancy formulae that could perform a better job of allocating teams into seeds, the more simplistic way that Riot uses is consistent with popular sports around the world (most notably soccer). It is common for a reason:

It caters to the fans.

Imagine telling NA fans that whether their team finished first, second or third, they would still fall into one particular bracket because Korea and China both had a few better teams than any of the NA outfits. What value would winning the final have if both finalists were guaranteed to enter the same bracket for the draw anyway? There would be no reason but pride to win the final.

Yes, LMS only gets two slots, and both slots in the second pool of teams, but they are an exception that proves the rule. Riot has seemingly structured the system in a way that caters to the fans of most regions; unluckily for LMS fans, it appears that LMS was the league that had to be shafted in order to make the other competitive leagues exciting.

Ultimately, while there are most certainly inequalities between the groups – such as TSM quite possibly facing a winless group stage while closely-matched rivals CLG have a genuine chance of winning their own – this system provides significant motivation for teams to perform well throughout the year. This system also provides the potential for unpredictable and exciting groups, as can be seen in this year’s draw. These World Championships are set to be an entertaining showpiece, and the various narratives that the groups provide are bound to make the event one to remember.