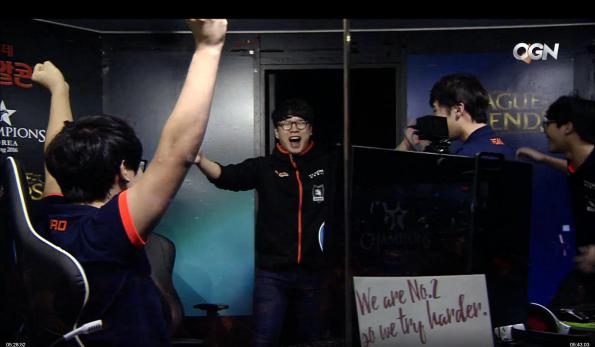 With a whopping 34-7 game win/loss record – 16-2 in total sets – the ROX Tigers have stampeded through the strongest region in the world. The Tiger’s performance this Spring Split has been one of the most dominant displays of teamwork in League of Legends history. Unlike their 2015 Spring Split where they hit the ground running early and face-planted into an unfortunate meta change late in the split, the 2016 ROX Tigers have carried their strong start all the way to this upcoming weekend’s Champions Final, where they face off against reigning Korean, IEM and World champions – SK Telecom T1.

ROX Tigers entered this split with hopes of claiming the number one spot in the world. Through the 2015 season they took home 2nd place in Spring, 3rd place in Summer, and 2nd place at Worlds. In both their second place finishes, the 2015 Spring Split and the Season 5 World Championship, the Tigers fell to their counterpart this coming weekend – SK Telecom T1. All told, the Tigers had a disastrous 3-15 all time record against the defending champions entering 2016.

Despite the record against SK Telecom T1, the new organization had a very successful inaugural season. Replacing now-retired jungler Lee “Hojin” Ho-jin with former Najin prospect Yoon “Peanut” Wang-ho was just the medicine needed to launch the team into all-time great territory. Peanut’s addition brought newfound aggressive – and often reckless – gameplay to the World-finalist roster where Hojin was all-too-often a liability with his passivity. Often invading the enemy jungler and picking fights, Peanut has helped the ROX Tigers achieve some of the strongest objective rates in all of Korea, topping the charts for first blood, tower, and baron rate.

This newfound aggression from the jungle position gave mid laner Lee “Kuro” Seo-haeng a much needed boost in his own individual results, shoring up the most apparent weakness critics would point to within the team. Kuro’s play has improved across the board, both statistically and visibly. This is especially true in laning and the early game, both areas where the mid laner previously struggled. The main point of focus with this improvement lies in his first blood participation rate, rising from 24.4% last Summer to 41% this Spring. Including Kuro in the team’s early game map movements allows him to power through the first 15 minutes, facilitating the mid laner’s ability to reach the mid and late game team fights that he has always excelled in. Between acting as the backup Peanut needs on aggressive invades and his liberal use of the Teleport spell in the early game, Kuro is able to contribute in ways he couldn’t previously when playing with the more vision-oriented and passive Hojin.

However, one large weakness in Kuro’s game is a lack of Azir usage, something that currently hurts their otherwise flexible, near perfect draft phase. Reportedly strong scrim results with the pivotal pick have yet to translate to the live stage; and while the team has seen consistent failure when choosing the champion themselves – sporting a 5-12 all time record – they’ve also seen incredible success against it – 18-8. ROX have historically done a very good job at giving Kuro positive lane match-ups against Azir such as Viktor, Varus, and Leblanc, so he can out-pressure or out-poke his opposing laner. Given Lee “Faker” Sang-hyeok’s recent outstanding performances on the champion, one would assume Azir to be a top priority against SK Telecom T1, either by picking around it or outright banning it.

While the synergy between Peanut and Kuro is a new advantage for the team, Kang “Gorilla” Beom-hyeon’s dominance in the support role continues as expected. Taking up the mantle as the primary initiation for the Tigers, Gorilla, alongside AD Carry Kim “Pray” Jong-in, have recorded stellar results on a host of champions. Defining the meta with their dominant performances on utility and crowd control heavy champions, the pair’s success proves why front line support play is the absolute best option currently. Perhaps most emblematic of this success is Gorilla’s play on Alistar as an aggressive turret diver. This tanky pick places the support at the center of KOO’s often-used level 6 strategy, where the bot lane innocuously pushes a wave to the enemy tower, only to spring a teleport from Kuro or top laner Song “Smeb” Kyung-ho onto a nearby ward, often finding kills and objectives to snowball off of.

Alongside Gorilla in the bot lane, Pray brings the identity of an enabler to the AD Carry role. Trending towards champions with strong engage potential, his sense on when to aggress upon the opposition has been remarkable. While his career 15-2 Ashe isn’t a popular pick in the current meta, Sivir and Kalista currently stand at the top of the marksman totem and Pray also boasts a combined 15-2 record on those two high priority champs this split. With marksmen that bring strong utility to a team comp, he plays an active role in allowing both Gorilla and top laner Song “Smeb” Kyung-ho to enter the fight with a host of crowd control.

The best player on this team, and the Champions Spring 2016 MVP, is the one who lacks a definable, concrete trait. Whereas Kuro is generally defined as a wave clear, team fighting mid, Peanut an invading, aggressive jungler, and the bot lane as primary initiators, Smeb embodies every attribute needed to succeed in the top lane. He is currently the most well-rounded top laner the game has ever seen, and the glue that holds everything together for ROX. Whether the team requires him to step into a mage carry role with Ryze, to bring follow up initiation on a Kennen pick, carry as a duelist on Fiora, or make up a tanky front line with Poppy or Nautilus, Smeb is indisputably top of his class. From smart, instinctual teleport plays during frequent lane swaps, to his commanding presence in standard laning, Smeb’s consistent, outstanding play places him far above the competition.

While as individuals many player on the Tiger’s roster have distinct identities, it’s surprising that ROX’s team dynamic can so malleable. Smeb, Kuro, and Pray have played a long list of champs to great success, and while Peanut and Gorilla trend towards only the strongest meta champions, the three laners bring otherworldly flexibility in the team’s ability to win games. Whether they choose to run hard engage compositions, peel heavy poke compositions, side lane enabling assassins, or even more supportive solo lane champions, ROX truly have an answer to everything. In 2015 they were known for incredible late game play, out-maneuvering their opponent on the map even at a deficit. With the addition of a more proactive jungler in Peanut, the Tigers now have a smothering early game to match these intelligent late game decision making.

Nearly every past number one team in Korea had a certain key to victory that they would often work towards. For 2015 SK Telecom T1, it was snowballing via the top lane; for 2014 Samsung Blue, it was their mid to late game team fighting. For the ROX Tigers, their key to victory is far less definable. They win games in an indescribable number of ways and, after Saturday night in Korea, they will be done finishing second fiddle to SK Telecom T1. They will be champions for the first time in their history.