I want to present some statistics and analysis of League of Legends’s new Featured Game Mode: Nemesis Draft. This game mode is essentially the same as a regular Draft Mode on Summoners’ Rift, except the players pick champions for their opponents. We will look at the popular champions for this mode, who performs the best/worst, and analyze the popular team compositions the players can craft for their opposition (e.g. which is better, all ADC or all tank?).

The statistics and analysis below are derived from 55,000 Nemesis Draft games played on the NA server on February 12th – 13th.

We will first look at the popular champions picked for opponents for this mode by examining the table below (sorted by popularity). We can easily see that some of the most often picked champions also have some of the most lackluster performance in ranked solo queue (e.g. Zac, Elise, Evelynn, Alistar). Urgot, often regarded as the worst champion in the game (although this is highly debatable), is currently 11th in popularity at 25% pick rate and 48% win rate – a respectable performance – but nevertheless below 50%  win rate.

While we see that the majority of the player population are making the right decision to pick low win rate champions such as Taric, Zac, Elise, and Evelynn for their opponents, there are some champions commonly picked that actually perform rather well – most notably Poppy, Sona, Ashe, and Aatrox all have above-average popularity and very high win rate (55%+).

On the other side of the spectrum, we see that the general player population are aware of the good picks and shy away from giving them to the opponent. Most of the low-popularity champions have very high win rates. The least popular champion from my data, Vi, was played 241 games and won 142 of them – a respectable win rate of 59%.

While discussion of individual champion performance can be interesting, it is likely to be missing the bigger picture. Unlike a regular draft game where most players pick champions based on their preferred role and champion, on Nemesis Draft players do place a lot more emphasis on team composition – or the lack thereof – for their opponents.

These kinds of “grouping” problems are often called clustering problems in machine learning and data  mining. There are many known data mining methods that can solve these kinds of problems, but I will be using a fairly simple and intuitive one called Hierarchical Clustering with complete linkage to divide the 86 most popular champions into groups. This will allow me to group champions that are often played in the same team. 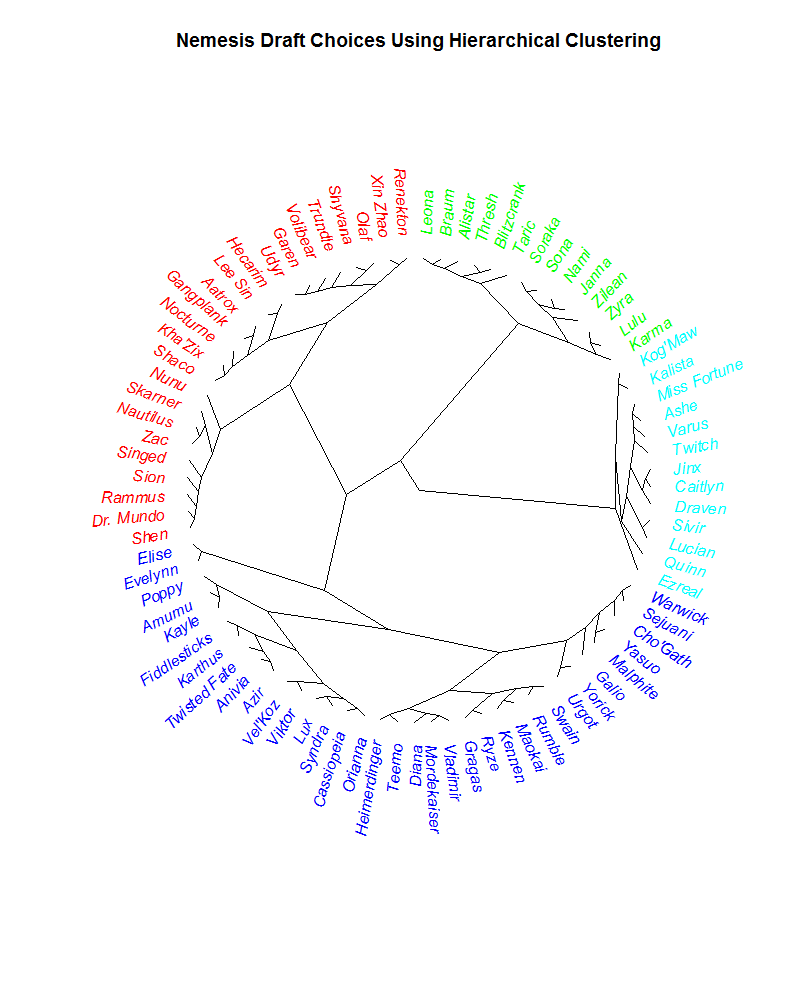 We can also see some finer sub-divisions of these groups. Most notably we see that the support group (green) branches off into two sections – one contains Leona, Braum, Alistar, Thresh, Blitzcrank, and Taric (mostly the melee support), the other contains Soraka, Sona, Nami, Janna, Zilean, Zyra, Lulu, and Karma (ranged supports). Similar patterns can be see from the other three major groups which the interested readers should examine and verify.

As a side note: it is worthwhile to stress that I gave very little personal direction on how the grouping is done beyond some a priori judgement calls based on my prior experience with similar problems. These groups are derived from the data mining algorithm acting on my Nemesis Draft data set.

Now that we have grouped champions together based on players’ perceived roles and properties for each champion, we can try to evaluate team compositions based on these four major groups.

First, I will define a team of five champions to have a composition of any of the aforementioned four groups if three out of five champions belong to one of those groups. For example, a team with Ashe, Twitch, Jinx, Janna, and Sion is considered to be in the Teal (ADC) composition because Ashe, Twitch, and Jinx all belong to the Teal group in the diagram above. With these rules in mind, I can compute the following:

Therefore, barring player skills and possibly other factors, we may be inclined to build an all-ADC composition for our opponents in a Nemesis Draft game. We should also try, within our best abilities, to prevent drafting a balanced team for the opponent.

Nemesis Draft provides a window of opportunity to study rare and interesting team compositions that cannot be easily observed in a regular game. For instance, we rarely encounter regular games where 3 ADC champions are employed on the same team. We can also use the Nemesis Draft data as lenses to observe the general player population’s understanding of all the champions and their perception of the similarities and differences within the champions. I believe this is merely a preliminary study; further effort on the analysis of Nemesis Draft is warranted in order to better understand the game.