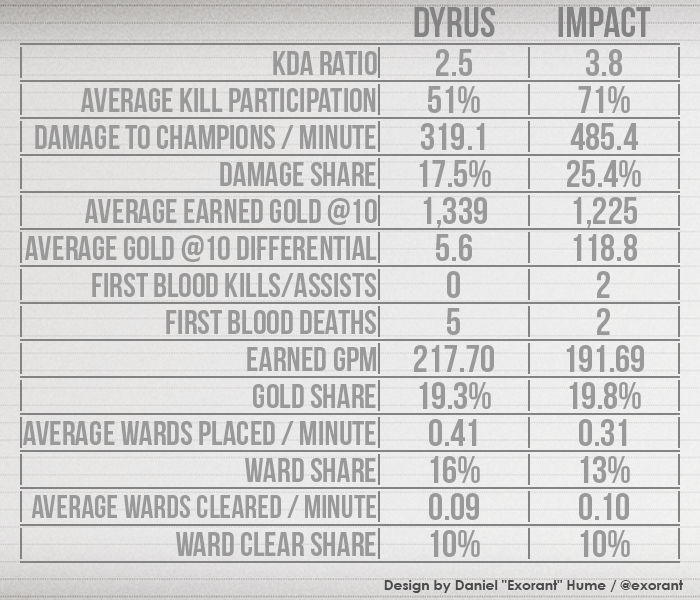 The largest fan base in the NA LCS belongs to TSM, but Team Impulse, formerly LMQ, has been winning over plenty of fans of their own with their skirmish-heavy, aggressive play style, epitomized by their jungler Rush, the former Korean solo queue star. Now the two teams are set to face off in the second Semifinal of the 2015 Spring playoffs.

There has been plenty of debate about TiP’s chances to dethrone the reigning IEM World Champions, and perhaps surprisingly, TiP is getting a lot of popular support, in some cases even being called the favourites to make it to the NA Finals. In this article we’ll apply some statistics to the TSM/TiP matchup and see who has the advantage role by role, as well as looking at some overall team stats.

To see a similar statistical breakdown of the other Semifinal, showcasing Cloud9 vs. Team Liquid, head over to the previous article.

Dyrus got camped this split by seemingly every opposing Jungler, and it shows very clearly in his stats. His KDA was abysmal, his average kill participation was the lowest in the entire league (outside of Flaresz’ two games as a sub for WinterFox), and his share of team damage is the lowest of any NA Top laner (which can be partly attributed to Bjergsen and WildTurtle doing such high amounts of damage). In absolute numbers, though, Impact did a whopping 52% more damage to champions per minute, on average, so Dyrus’s teammates weren’t just making his damage share look bad.

Dyrus did earn more gold per minute than Impact, and also out-warded him, but despite these small wins and his team’s greater overall success, Dyrus simply didn’t contribute as much, statistically, as Impact this split.

Santorin vs. Rush has been one of the big talking points leading up to the TSM vs. TiP clash, with many hyping up Rush’s carry-oriented Jungling and big-time playmaking. (For more about this matchup and the recent debate, check out the latest #eSportsTime video from DrPuppet.) Over the regular season, though, Santorin doubled Rush’s KDA and had slightly higher kill participation. Rush contributed more damage, unsurprisingly, but his earned gold and gold differential at 10 minutes were far inferior to Santorin’s. The First Blood numbers are very telling, with Rush participating in one more First Blood, but giving up four FB deaths compared to Santorin’s zero.

To top it all off, Santorin’s vision control was definitely superior. Much has been made of Rush’s improvement in team play over the course of the split, but in the last four weeks his warding and ward clear numbers were actually lower than the first half of the split.

It’s hard to argue against Bjergsen as the MVP of the 2015 Spring split. XiaoWeiXiao receives, and deserves, a ton of respect, but his KDA, kill participation, and damage output don’t match Bjergsen’s by a long shot. XWX earns just as well in the first 10 minutes of games, and earns decent leads, but again Bjergsen’s leads make XWX’s look small. The First Blood numbers are a wash, but XWX does contribute more to the vision game than Bjergsen. Bjergsen’s advantages in combat and laning are too big, though.

The stats start off really strong for Apollo with his impressive KDA, but the advantages quickly begin stacking up WildTurtle’s way with kill participation, damage output, laning, and overall gold earning. WildTurtle’s damage share was somewhat inflated by Dyrus’s low damage output, but it was also deflated by Bjergsen’s insane heights. WildTurtle scores another point for being involved in four First Blood kills.

Apollo holds his own pretty well in this comparison, and deserves a lot of credit for putting out as much damage as he did with only 23.5% of his team’s gold, but TSM’s ADC gets a slight edge.

Lustboy has a high KDA, like most of TSM, and his kill participation edges out Adrian’s. The two Supports are very closely matched for vision control. But the First Blood numbers are Lustboy’s real advantage, with six FB participations and no FB deaths.

Adrian has a larger champion pool, having won matches on six different champions during the regular season, and adding two more to the list during the Quarterfinal vs. Gravity. Lustboy, meanwhile, only earned wins on four different champions, but had little incentive to diversify given TSM’s level of success.

With only small differences across the board, it comes down to First Blood success vs. champion pool, and TSM have had an extra week to come up with new strategies and practice new champions, so the advantage there may have shrunk.

Note: Average gold differential @ 10 minutes is based on values rounded to the nearest hundred.

TSM also takes more first towers than TiP, securing these at an average of 12.4 minutes in. Even though Impulse’s control of the first Dragon is better, they still don’t prioritize that objective, taking fewer than half of the first Dragons.

Both teams place and clear wards at almost identical rates.

Both the state of League of Legends and the levels of play of these two teams have changed over the course of the split, so stats based on the regular season aren’t going to tell the complete story. On any given day, either of these teams could definitely win this Semifinal matchup. But drawing on the numbers to paint one perspective for us, we can see that TSM has stacked its advantages across most of the map, sacrificing Dyrus on his lonely Top lane island in order to dominate from the Jungle, Mid, and the duo lane.

But don’t let the long list of “Advantages” in this article weight the odds too heavily: TSM may have advantages, but they aren’t generally very large ones. The players are quite closely matched in every role, with strong arguments in favour of Rush, XiaoWeiXiao, Apollo, and Adrian as legitimate contenders in their roles. The largest gap actually appears to fall between Dyrus and Impact, so that could be a major hinge point in this series.

To pull out a win, Team Impulse will need to draw on some World Champion magic from their star Top laner, and will be looking for the rest of the roster to prove that they are one TSM’s level, and that their fans’ faith in them is well deserved. Let’s eagerly await what is sure to be an explosive best of five.

Thank you to Daniel “Exorant” Hume for putting together the stats graphics!