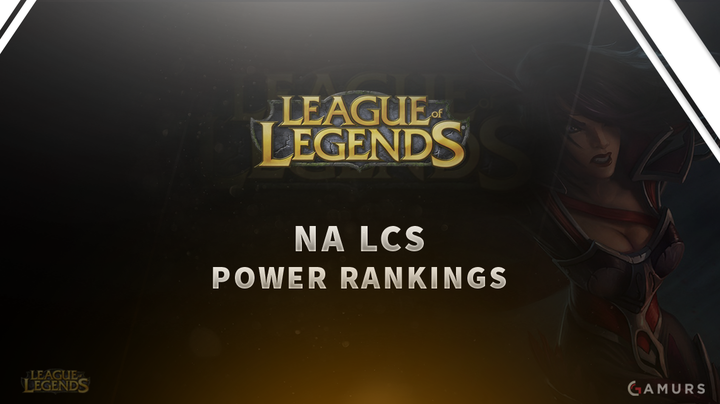 The fourth week of the North American League Championship Series (NA LCS) has come to a close, and with it comes an updated edition of GAMURS’s power rankings.

The points for these power rankings will be calculated based on the rankings submitted by any of the GAMURS staff members. These staff members were asked to rank the 10 teams in order from best to worst, with No. 1 being the best and No. 10 being the worst. Points will be rewarded to mirror a team’s ranking; for example, the first place team will receive 10 points, while the 10th place team will receive one point.
After every week of action, we will be releasing another power rankings article where the teams will either move up or down based on how they perform in their matches, so don’t forget to check back here each week for the latest power rankings.
Now, without further ado, here are the power rankings for the fifth week of the NA LCS.

Echo Fox may have given them a scare, but another 2-0 week leaves TSM unanimously at the top of our power rankings.

The series against Echo Fox was admittedly way closer than anyone expected it to be, but we got to see how TSM played under pressure and they did not disappoint. The series against EnVyUs was supposed to be one of the best of the split, but TSM thrashed them without a second thought.

Defeating Counter Logic Gaming 2-1 and Team Liquid 2-0 was enough to boost IMT back into the No. 2 spot in our rankings.

CLG look to be getting closer to form, but IMT did not falter even after dropping a game to the defending champions. Defeating Liquid is no easy feat now that the squad is returning to form, but defeating them 2-0 is something even more impressive. Immortals did it though, and went 2-0 last week in impressive fashion.

Two supports, alternating every game… It’s actually working. Cloud9 swept aside both EnVyUs and NRG eSports 2-0 this week to move up to No. 3 in our rankings.

The six-man roster is always an interesting experiment, and this Cloud9 team is pulling it off remarkably well. EnVyUs should have been a very tough opponent, but Cloud9 ran them down in no time at all and did the same to NRG. This squad is shaping up to be very dangerous.

What happened? Our Cinderella has been kicked from the castle. Completely falling from grace, EnVyUs was defeated 2-0 by both TSM and Cloud9 last week.

Losing to these two teams is not a big deal. Getting swept isn’t even that bad. The problem, is that EnVyUs looked like they forget how to play League of Legends at an LCS level. This was bad. This week they need to bounce back against Echo Fox and Liquid, or the rest of the split is looking scary for EnVyUs.

Though they only went 1-1 by defeating Apex Gaming 2-0 and falling to Immortals by the same score, Liquid moved up one spot in our rankings.

Apex’s inconsistent showings are something for their fans to worry about, but that is still a good team and Liquid looked good taking them down. The absence of star ADC Chae “Piglet” Gwang-jin is odd for Liquid, but fabbbyyy is doing a remarkable job as his replacement. As for the loss against Immortals, it’s Immortals. Not many teams can stand up against that squad right now.

Another 1-1 week, this time by falling 2-1 to Immortals and defeating Phoenix1 2-0, sees CLG move up another spot in our rankings.

Slowly but surely, CLG is improving… Kind of. The team looked decent enough against Immortals, despite the loss, and did win 2-0 over Phoenix1. Last week wasn’t a fair assessment, as Immortals and Phoenix1 sit on opposite ends of the skill spectrum and CLG falls somewhere in between. This week should help shed some light on their skill when they take on NRG and TSM.

A 1-1 week from Apex actually sees them fall two spots in our rankings, as they were defeated 2-0 by Liquid and defeated Echo Fox by the same score.

Apex’s fall has more to do with Liquid and CLG getting closer to form than Apex being bad, but Apex’s play has been subpar as of late. Swept by Liquid, Apex did not look good. Defeating Echo Fox, even 2-0, is nothing to brag about right now.

Speaking of Echo Fox, an 0-2 week somehow sees them move up one spot in our rankings after being defeated 2-1 by TSM and 2-0 by Apex.

These guys are a mystery. Every week they seen to have a good game or two, and this week they almost beat the best team in North America, but then they lost 2-0 to Apex. Inconsistent play and still not having a coach leaves Echo Fox near the bottom of our rankings.

A couple weeks ago I said I was too quick to judge NRG, well it turns out I wasn’t. The squad got swept by Cloud9 and beat Phoenix1 2-1 last week, as the drop to No. 9 in our rankings.

Yes they won a series., but it was against the unanimous worst team in the league, they dropped a game against them, and quite frankly it was one of the most boring series of professional League of Legends I have ever seen. Cloud9 pummelled NRG, and they deserve this placing right now.

Is there anything left to say? Another 0-2 week as Phoenix1 fell 2-1 to NRG and 2-0 ro CLG leaves the squad winless going into the fifth week of the split. That’s practically unheard of.

At this point, it’s a little sad to watch. Inori seemed to give the team a little life and hopefully, for the sake of everyone, he continues to help the squad improve and provide a very needed boost in energy. Because right now, Phoenix1 is on track to lose every series this split.

What do you think about our Power Rankings for this week? Are there any teams that you would rank higher or lower? Let us know by commenting below or tweeting us @GAMURScom.
Spencer Hester can be contacted by email at [email protected] or on Twitter – @SpenceGAMURS.