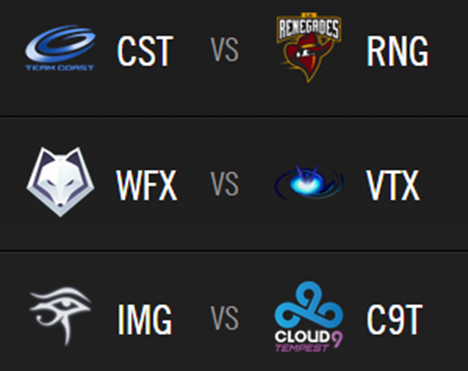 For the fourth week of the Summer 2015 North American Challenger Series, we saw teams fighting for playoff spots. With only five weeks of round robin play before playoffs, the teams battled it out for playoff seeding and qualification.

This week, the matchups were as follows:

Check out the VODs and a recap of all of the games this week below!

Going in to Game One, both Team Coast and Renegades had undefeated records, and the goal of preserving a flawless record was on both team’s minds. Team Coast struck first with first blood on Alex Ich’s Viktor at 13:15 in the river, but neither team was able to make much of a gold lead during the early game. Perhaps it was both teams playing cautiously, but the gold differential never exceeded 3k until around 35 minutes into the game, when Team Coast found a pick on Maplestreet to start a fight where they would go three for nothing, taking Baron afterwards.

Despite being down in gold, Renegades continued to stall out the game, contesting Baron vision whenever the buff was up and avoiding full on fights for most of the mid game. Team Coast also seemed hesitant, failing to initiate any team fights or pushes with almost a 9-10k gold lead. Both teams battled over vision, but neither committed to a major fight, letting the clock continue to run.

By 54 minutes into the game, Team Coast’s gold lead remained around 9k, but they were able to pick up their fifth Dragon for the Aspect of the Dragon buff. With this buff, Team Coast turned to Baron to pick it up with hopes of powering up their team to victory, but Crumbz’s Rek’Sai was able to steal Baron at the last second, preventing the prospect of the push to end. With Crumbz’s death timer at 80 seconds, it became incredibly clear that any deaths at this point in the game could be catastrophic, and both teams prepped for the fight to end the game. It happens at 60:45 when Team Coast baited another Aspect of the Dragon to pick off Alex Ich’s Viktor, ending in three kills for nothing and allowing Team Coast to storm the Nexus to finish the game after a long 62 minutes.

In Game Two, Renegades aimed to even up the series against Team Coast with what looked to be a Runeglaive Ezreal mid for Alex Ich, but when the game started, Smite was nowhere to be found. Renegades picked up first blood at 9:30. Throughout the next few minutes, Renegades are able to set up some side lane freezes, allowing their team to pull even further ahead in gold while Team Coast is left to only take Dragons. By 17:30, Renegades are up by almost 4k gold.

Even without picking up kills, the key to Renegades’ siege composition lies in Tristana’s ability to tear down turrets with her abilities and Ezreal’s ability poke. By choosing to go Muramana and Iceborn Gauntlet over Runeglaive, Alex Ich’s Ezreal is able to make a higher impact earlier on with poking Coast out to provide Tristana time on the turrets.

With a gold lead in the mid game, Renegades continue to siege and pressure the map, winning some towers on superior rotations, but it isn’t until 34:10 that Renegades take a fight in the river to go up 5k gold. Renegades use their gold advantage to continue sieging and taking turrets, but also winning fights when they break out. Unlike Game One, Renegades capitalize on their poke and siege comp with their gold advantage to continue to push their advantage, going up 7k by 43 minutes. At 44:40, Coast attempts a last chance flank bot during a Renegades siege, but Renegades win the fight and are able to take the Nexus, evening up the series 1-1.

In Game One, the early game was comprised of several small skirmishes throughout the map, ending with kills and turrets on both sides equal gold for most of the first 25 minutes. At 28:50, this all changes when Winterfox pick a fight mid to get an Ace for one, turning to take Baron afterwards with a 4k gold lead. Winterfox continues to apply pressure, finding picks and taking mid and top inhibitor to increase their lead to 11k gold by 35 minutes. At 37:00, Winterfox pressure Baron, picking up the buff, an Ace, and finally the Nexus to take Game One.

Winterfox starts this game off aggressively, picking up First Blood for P1noy’s Ashe when they catch Hecarim in their jungle at 2:35. However, Winterfox aren’t able to convert the gold advantage into a lane advantage, and by 18:30 Vortex have a 3k gold lead from small skirmishes and turrets

At 20 minutes, a fight breaks out mid where Vortex pick up four kills for one and are able to push two turrets afterwards, increasing their gold lead to 7k. With the gold lead, Vortex continues to win fights, getting Baron at 29:10 and fourth Dragon at 30:35. These buffs allow them to take mid and bot inhibitors afterwards and increase their lead to 13k gold by 32:00. With mid and bot inhibitors down, Vortex group to take top inhibitor and win the fight in Winterfox’s base to close the game and get their first win.

In Game One, Team Imagine flexes their muscles with their team fight composition. Despite C9T picking up first blood at 5:00, Imagine maneuvers the early game carefully, eventually getting a fight at 13:30 where they go four for nothing and go up 1k gold. From then on, Imagine plays the objective game, taking fights when they want Dragons and towers. At 27:40, C9T try to sneak a Baron while Imagine is at Dragon, but Imagine collapse quickly, killing four members of C9T to go up 6k gold.

With a substantial gold lead, Team Imagine proceed to snowball by taking all jungle camps and jungle objectives. At 37:40, Imagine get a pick on C9T’s Gragas at the Baron pit, allowing them to secure the buff afterwards and turn to set up vision on what would be their fifth Dragon. The fight for Aspect of the Dragon begins at 40:00, and Imagine’s gold lead shows them the way to victory, picking up the buff and pushing straight to the Nexus for the Game One win.

Game Two was much closer than Game One, with C9T  gaining a 5k gold advantage by 13:00 after early aggression and kills in all three lanes. However, Imagine played the following minutes incredibly well, trading turrets and objectives rather than picking fights to keep the gold advantage stagnant.

At 26:40, a fight breaks out at Baron  and Imagine go three for one to bring the gold difference back to only 1k, but neither team is able to pick up Baron afterwards due to low health bars all around. The teams then return to Baron for another fight at 28:50, but this time C9T come out on top and pick up Baron. With the buff, they are able to knock down more towers, extending their gold lead to 5k again. But Imagine don’t give up hope, and at 34:50, a  fight breaks out after C9T pick up their second Dragon, allowing Imagine take two kills for nothing and push bottom inhibitor down, leaving C9T up only 4k gold. Imagine’s perseverance pays off, and at 37:40, the teams fight at Baron, giving Imagine an Ace. Imagine pushes bot to win the game with a 3k gold deficit and secure a playoff spot.

Standings and Next Week’s Schedule

The standings after week four are:

And here are the matchups for next week!