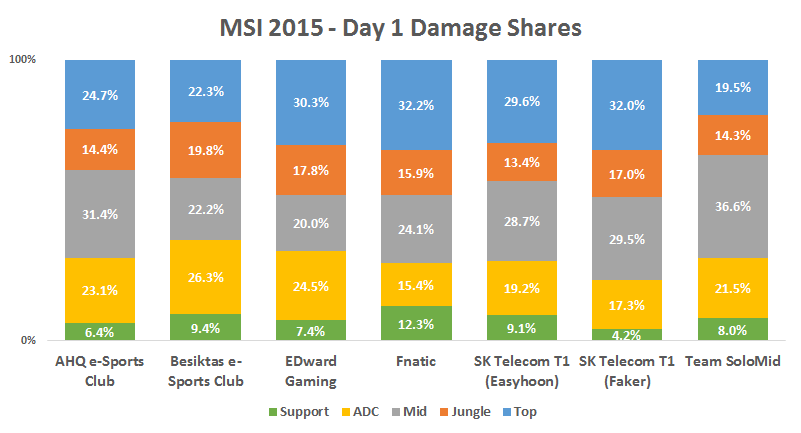 The first day of the Mid-Season Invitational was a chaotic affair with constant combat all over the map in seemingly every game. On average, there were 0.84 kills per minute in yesterday’s games. Compare that to NA’s spring split average of 0.69 and you can see how bloodthirsty these international teams have been!

With all of that fighting going on, it’s interesting to see how the different teams distributed their carry roles. The chart below shows each team’s average damage shares (based on total damage to champions) from the MSI Day 1 games. Stats are provided separately for Easyhoon’s game and Faker’s two games.

Note: Damage share is calculated separately for each game and then averaged across all games. This may produce slight differences from damage share based on totaling the damage from all games and then producing a percentage.

The LMS champions had one of the most traditional damage distributions, with a bit more damage from westdoor in Mid and a bit less from AN at ADC. AN’s numbers are lower because of an abysmal 11% share, with 255 damage per minute, while playing Kalista against EDG. His other two picks performed quite well.

EDG was one of three teams whose Top laners provided the largest damage share, along with Fnatic and SKT. Koro1’s damage output with Hecarim was absolutely through the roof, putting out 817 damage per minute, which was the second-highest single-game DPM number of the day!

Huni, Huni, Huni, Huni! The EU LCS Rookie of the Split hard-carried his team to success, massively out-damaging his Mid and ADC. Steeelback’s damage output was the lowest of all MSI ADCs, but that’s partly due to playing Urgot, and partly because of high damage contributions from Jungle and Support, both of which were playing high-damage champions for their roles. (If you’ve never taken a close look at Nautilus’s damage output, it’s super high for Supports!)

No surprise, SKT relied more on their Mid lane for damage output in Faker’s games, while in Easyhoon’s game there was more reliance on Bang’s Kalista. The big story, though, is MaRin, who put out 1,047 damage per minute on Gnar vs. TSM, doing 39% of the team’s damage. He accomplished it by getting early gank support from Bengi’s Rek’Sai and snowballing on Dyrus super hard with a first-item Frozen Mallet. What a performance.

Bjergsen had the highest damage responsibility for TSM, no surprise. His damage output was inflated somewhat by Ziggs’ high poke, but that’s why you play the little Yordle, after all. Dyrus’s 19.5% is much higher than his Spring Split average, and that didn’t work out very well for TSM. Yes, Dyrus did 450 DPM and 29% damage share vs. SKT as Hecarim, but in the meantime he was giving up a 1,047 DPM game to MaRin’s Gnar.

Interested in more stats from the MSI? Check out the Player Stats and Team Stats pages on OraclesElixir.com, updated daily.