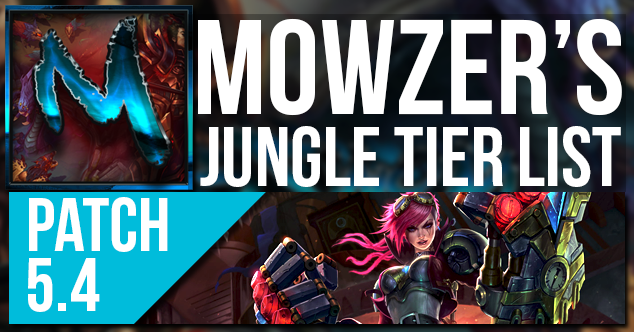 Hey everyone. Mowzer here. I am a diamond jungle main on both the Korean and NA servers. I have been playing since closed beta and I love theory crafting. Here is my sixth tier list for junglers for Solo Q. This list is for patch 5.4 and focuses on Junglers in general. These are the champions, I feel, are strong in Solo Q, but that does not mean that everyone else is trash. I have spent a great deal of time thinking, playing games (on both NA and KR), testing champions, reading guides, and watching games to develop this list.

This patch rocked the jungle a bit with a few changes:

The following are listed from strongest to weakest, but none of these junglers are remotely under powered. Also, at the end of the list I have included what I feel are the 11-20 junglers, in no specific order. Attention! This is a top ten tier list, not a complete tier list. I will say that again, this is NOT a complete tier list of every champion that can jungle.

Top 5 – The big hitters: note (5th to 1st) means that I ranked the champion on my list at 5th last time and now is placed 1st. Unlisted means they were not on the previous list. Top 5 champions have their own champion cards now with recommended builds and skill order.

Contested champions: (these are champions I wanted to place in top 10 but felt others did slightly better): Xin Zhao – Ghetto Jarvan was a close top 10 pick after the changes to the jungle. He’s similar to Jarvan in many ways and has no issues clearing the jungle. Wu Kong – Not allowed to discuss him, because someone might murder me. Cho’gath – A tanky ap that brings a lot of CC to table and great damage to tank ratio. He has no issues clearing the jungle. Kha’zix – the evolving hyper carry that can easily reset his way to a killing spree. Having to pay to change the jungle item gimped his comeback.

11-20 Junglers: This section was added by request and will not be explained in detail. They are in no specific order. Wu Kong, Rengar, Kha’zix, Cho’gath, Nunu, Hecarim, Amumu, Evelynn, Xin Zhao, Master Yi.

My Personal Choice: Cho’God – I have always liked Cho’gath, both in lane and in the jungle. He has great AP damage to tank ratio and has great CC. He can secure objectives easily with his ultimate and has no issues clearing the jungle. His downfalls stem from the ability of the player to land skillshots or the enemy able to dodge them and he gets kited rather easily. Early game he runs out of mana insanely fast.

Honorable mentions – every champion in the game not mentioned above.

Post any comments below or let me know what you think. I post all my tier lists on goldper10.com and they can be seen there along with my other articles and comic series. I am currently working on another tier list. This one will focus on five specific champions, I feel, are good for climbing in bronze, silver, and gold. I will include possible runes, masteries, builds, etc. If you are interested, let me know. I hope everyone is enjoying these tier lists. Thank you for all the support, feedback, and criticism. I greatly appreciate it! My social sites are Facebook, Twitch, Youtube, and Twitter. I owe to people a special thanks for their contribution. First, to my amazing girlfriend that goes out of her way to make sure everything I do is the best. Thanks babe. You mean the world to me. Second, thanks goes to Nunire for checking my work, input, and helping me with various design projects. Thanks Mijo. Have a wonderful day and best of luck to you in your games.

TL;DR – This patch hurt junglers in a few ways. It now costs gold to change the jungle item and smite has a shorter range. Jarvan has been knocked off his throne.