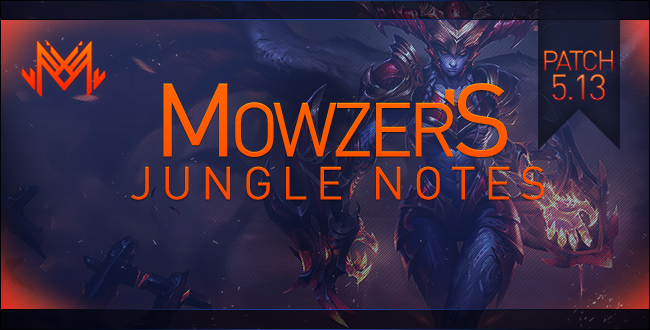 Hey Everyone. Mowzer here. There were a number of changes to the jungle this patch and an attempt to nerf to top laners taking advantage of cinderhulk. These notes focus on changes directly impacting the jungle and junglers. I will not be going over every change in the patch. For the full list of changes check out Riot’s official patch notes for patch 5.13 here.

Impact: This is a nerf and buff to junglers. It’s a buff to junglers that end up getting slow stack kited for days. It will now make it easier for champions like Olaf, Shyvana, Volibear, etc to catch up to their target(s). It’s a nerf to champions that can apply more than one slow though. Nunu will no longer be able to stack snowball with red buff or super slow a target with a snowball and his ultimate. I am overall happy to see this change. It should help out melee junglers for the most part.

Impact: This is going to have a huge impact on the meta this patch. This item is really strong and some champions are going to make it look broken. Many AA (auto attack) junglers are going to flock to this. I can even see tank junglers with good AAs or AA resets taking this. I like the stack change, because it rewards junglers for doing more than just farming their jungle. Securing scuttle crab and dragon/baron will help stack the item more quickly. This is going to be a great item choice on many junglers, such as Master Yi, Shyvana, Warwick, Xin Zhao, Jax, Nocturne, etc. Once it upgrades it will trigger on hit effects on every other auto attack. This is going to be insane with some item and ability combos. This will work amazingly with BORK. I am excited to try this out on my attack speed Diana build. The double on hit proc is going to dish out some great damage with passive + BORK + Nashros tooth. There should be a sharp rise in this item being taken this patch and various junglers rising again.

Impact: I am not sure what Riot is thinking. I do not like this item. Buffing this item even more is just careless in my book. This is just going to make laners want to take it more. They did remove Luden’s Echo proccing off of it, but that wasn’t the issue to begin with. Ezreal won’t be able to Q proc Luden’s anymore, but that was just a part of the problem. This change isn’t really going to make Mid Ezreal any weaker. The item is useful for mids because they can push waves easily and restore mana from taking camps. This gimps junglers like Fiddlesticks and buffed more laners than jungle mages. AP Mid Miss Fortune is more viable than Jungle Fiddlesticks atm. Something is really wrong here. I like magus more than runeglaive. I would rather see magus enchant reworked than to see runeglaive. This is a poorly designed change, in my opinion.

Impact: I thought I read the patch notes wrong with this change. I am really not sure what Riot is thinking now. They reverted the passive back to how it was ages ago. The old school visage made heal tanking a thing and it was annoying. Team comps were built around it and it created these boring team comps of tanky targets that healed each other for days. I think this is going to have a huge impact on games. I can see the meta shifting to heal comps that turn various champions into unkillable targets. Singed just got a buff too and I can see him being annoyingly hard to kill with this change and having big heals on the team. I am already seeing a lot of Soraka, but now she’s really going to be played.

Impact: This item was just too good. The nerf to it isn’t going to break the item, but it won’t be as good as before. It will have a bit less health and you won’t be able to activate it as often now. It’s still a solid item for various champions. I am not happy about this nerf, but I think it was needed.

Impact: There were a number of changes to various AP items and I am not going to be going into detail on all of the items. Overall, the items are more cost effective. Rod of Ages is weaker early on, but it will get stronger as the game goes on. Rylai’s scepter is going to be a better take on many AOE mages and Will of the Ancients is going to make others insanely hard to kill. I can see Vladimir taking Rylai’s, Will, and Visage and just turning into this monster that can slow you for days and never die. These changes seem to be a big buff to Vladimir.

Note: I will not be discussing every champion changed in this patch. I have chosen to not discuss the nerf to Xin Zhao, because it’s more a a niche AP change.

Impact: This is a decent buff to jungle Kayle. She’ll be able to clear camps faster now and this should allow her to retain more health and stay out longer. The camp reset change really killed of jungle Kayle. She no longer is able to max range clear the jungle without taking damage. This should help bring her back some.

Impact: This is a nerf to Nautilus in general, but I think it was more aimed at support Nautilus. Lately, he has been played a lot in the top lane and as a support. I rarely see him as a jungler anymore. He won’t be able to dish out as much damage as before and clearing the jungle will be slightly slower. This isn’t a nail in the coffin, but I feel he is a better support than jungle.

Impact: Yet another nerf to Rek’sai. This one is pretty painful. It seems like a small nerf, but this is going to remove some of the playmaking she had. It’s now going to be harder for her to knock up targets, but it isn’t going to make her useless. I don’t like this change. I think they could have adjusted her in other ways to bring her down a notch. This was just a poor choice on Riots part, in my opinion.

W – Burnout: damage per second reduced to  20/33/45/58/70 to 20/35/50/65/80
Impact: Riot goofed in the original patch notes and didn’t include this change. It seems that they wanted to lower her damage output because of the introduction of Sated Devourer. It’s not a huge nerf though. She’ll still clear easily early on. Her mid-late game damage is reduced some, but those building devourer won’t have any issues dishing out damage.

This patched introduced a few things that, I think, will shift the meta some. I really liked seeing all of the bug fixes. I am on the fence about the slow stacking removal. I think it will help junglers out overall, but it will gimp a few junglers. I really don’t like runeglaive. I would have rather see a revamped version of magus added. Runeglaive is being abused by laners too much and I don’t like what it has done to Fiddlesticks. Devourer is going to be taken a lot more now and it’s going to be very strong on various AA junglers. Shyvana will be making a comeback, for sure, with the removal of slow stacking and the introduction of the improved devourer. I think even certain tank junglers will try to abuse devourer or incorporate it into their builds. I am excited to rock some attack speed jungle Diana.

I dislike the changes to Rek’sai and spirit visage. I think the nerf to Rek’sai’s knock-up was a bit harsh and I don’t like where the visage changes could take the meta. The heal meta was abused once before with a similar form of spirit visage. The adjustments to the AP items seem good, but I think a few mages could abuse the changes with Rylai’s and Will of the Ancients. Ryze and Vladimir are already pretty strong. I can see both of them turning into even bigger monsters this patch. I can see Singed rising as well. Riot, I am not sure where you are trying to take the meta this patch. I am hoping that it shifts it some, but I see a few things that could be exploited and turn certain champions into must bans. Changing items can buff champions to OP levels more than direct buffs to the champion can.

TL;DR – There were some big changes this patch and a number of bug fixes. Slow stacking is gone and devourer got a big change to it. Rek’sai isn’t going to be as good as before and AP items got some tweaking.