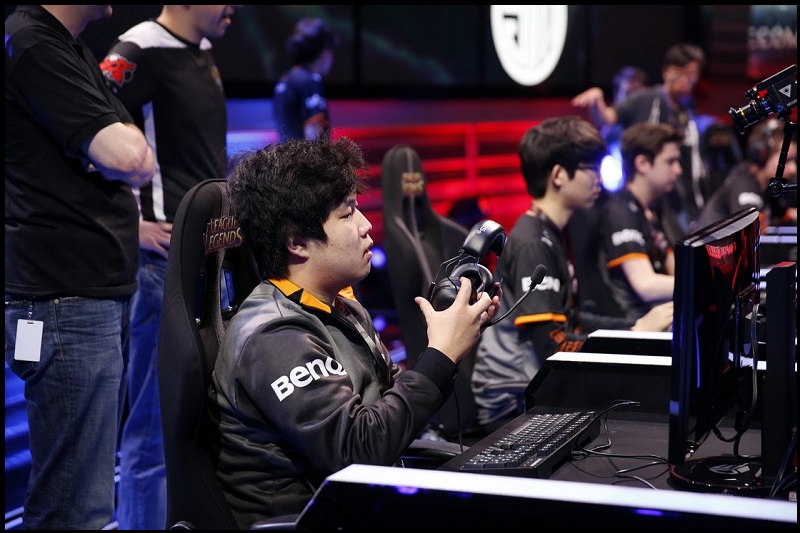 Group stage is over. Both days proved to be disappointing from both a spectator and an analytical standpoint. Unfortunately, out of the 15 games played only 3 were not completely one sided. That stat alone says a lot about either the competition participating or the format of ‘round robin’, however the discussion on the use of best-of-one in League of Legends can be saved for another time.

The second day of play in the group stage saw two interesting and entertaining matches come to light, both involving SK Telecom T1. Since all the other matches were so one sided, it would be a waste of time to go over them individually, so let’s just summarise the group stage as a whole.

SKT exemplify playing from behind, and in reality probably should be heading the playoffs with a score of 3-2. However, thanks to some horrific late game positioning from both AHQ and FNC, SKT were able to show there prowess at punishing mistakes and move forward in the competition with a final count of 5-0. Although it should be mentioned, Easyhoon is definitely the best Azir in the world and Bang has made a statement for best marksman in the world, showing his game 4 performance against CJ Entus was no fluke in a similar composition.

On the other side of the coin, TSM were absolutely horrible. People will blame Dyrus a lot for these losses, however the fact is that the team simple played awful. They had no strategy, no adaption, their draft was pathetic and their in-game movements were shocking. This was not the TSM we have come to know, and they proceeded to be utterly destroyed in this tournament — that is not hyperbole. In their 4 defeats, they managed to die 89 times with an average of 22.25 deaths per game.

So, on our list of the two fantastic games played yesterday, firstly is SK Telecom T1 vs. Fnatic. The draft of both teams is shown later in the game, with multiple area of affect crowd control ultimates being applied to contain Bang (in a ‘protect the marksman’ composition for SKT), with Steelback’s Sivir playing clean up and applying good area of effect damage.

This game displayed perhaps a weakness in SKT’s early-mid game that can be capitalised on. In this particular game, the only member of FNC who was actually doing well in lane was Huni, who was going even in his 1 vs. 1 with MaRin. The strong lane presence of Bang, Wolf and Faker enabled an early dragon from bengi’s Nunu. Such was the strength of Huni, he was able to roam at 7 minutes and gank Faker, securing first blood for Febiven’s Cassiopeia.

It seems the strength of Bang it not just limited to the late game, as he was an impressive 40 minions up by 11 minutes. However, the utility of Sivir was perfect for FNC’s composition, allowing the team of FNC to run wild. FNC became the first team of the tournament to get a dragon against SKT, and they would slowly increase their lead for the next 25 minutes.

Despite two lanes losing, FNC were able to win the game almost solely off of Huni’s early performance, including excellent roaming and taking the initiative in regards to aggressive teleports, forcing MaRin to respond to him — this, coupled with a much more impressive showing from Febiven’s Cassiopeia, allowed the impressive team fighting composition of FNC to find some success against the best team in the world.

YellOwStaR’s Nautilus pick was phenomenal, in addition, constantly finding a way to keep Bang down until late in the game. Unfortunately for FNC, eventually the team composition failed and Bang was able to fight cleanly, displaying his raw skill as he dashed around the team fight, earning himself a pentakill and SKT the win.

The second of the two excellent games on the day was the ahq e-Sports Club vs. SK Telecom T1 game where the Taiwanese team pushed the Korean team to their absolute limit. There is no doubt now that AHQ is a legitimate team.

Playing against westdoor, Easyhoon managed to grab his Azir, possibly for the last time as you would expect most teams to ban it considering the effect he had on this game (his damage was 50.1k compared to the 21.1k of both MaRin and Bang). The aggression and skill with which he plays this champion is one to admire, and definitely an intimidating player/champion combination.

However, the Taiwanese mid laner is no pushover, drafting Cho’Gath, he managed to go even and solo kill Easyhoon with a beautiful flash feast play early in the game. The rest of the team also rose to a new standard, Mountain drafting Rek’Sai with Ziv on Maokai — already with a lot of engage, damage mitigation and crowd control, the bottom duo consisted of Nautilus and Sivir, complimenting the composition.

Against SKT’s Gnar, Gragas, Urgot, Thresh and of course Azir, AHQ managed to last and grow a significant lead through the mid game in a fashion similar to FNC. Unfortunately despite the fantastic display against SKT, AHQ lost in a rather embarrassing way — being picked off and caught, one by one, after holding a 10k gold lead over the LCK Champions.

So, with the top 4 of the group stage being locked in, that leaves us with two best-of-five series to play on day 3 of MSI. Firstly, SK Telecom T1 vs. Fnatic in a series is an exciting prospect. After yesterday, there is belief that Fnatic can definitely take a game off of the Korean team if they avoid making the same mistakes. SKT of course are stronger over a series, so while Fnatic are not favourites, they are the most inconsistent and wild team in this tournament, capable of upsetting titans with flashy picks or being completely rolled over.

Already proven internationally, YellOwStaR can feel proud of his boys playing as well as they have in their rookie season — even taking a game off of SKT would be enough to earn them some praise here, as the LCK Champions have not dropped a match yet. Oddly enough, Huni looks (along with YellOwStaR) the most like he’s ready to lead the team on an international stage, after yesterday generally outplaying MaRin — after most teams struggled early against SKT thanks to the phenomenal laners they have to offer, Huni was Fnatic’s answer, not only controlling his own lane, but making his presence felt across the map. If there had to be a prediction, it would be SKT 3-1.

Edward Gaming vs. ahq e-Sports Club is an interesting match. The latter have definitely proven they’re a top side, and while we already know EDG is one of the top teams in the world, their play has looked relatively scrappy over the first two days of play here at MSI (although it did improve on the second day). If we look forward and EDG continue to improve in the manner they are, it doesn’t seem likely that AHQ can stand up to the Chinese powerhouse. However, again, that certainly does not mean that AHQ cannot take games off of EDG in a series.

With players like westdoor, AN and Ziv, AHQ look capable of anything. Albis will need to look long and hard at his positioning errors in the SKT game, but if they can push SKT to the limit in the manner they did, there is no reason they cannot take games off of them.

In this series, although it would be fantastic to see AHQ win, it’s impossible to deny the raw talent of EDG. They’re so good mechanically that in this instance, scrapping the way they do actually favours them. 3-1 to EDG.