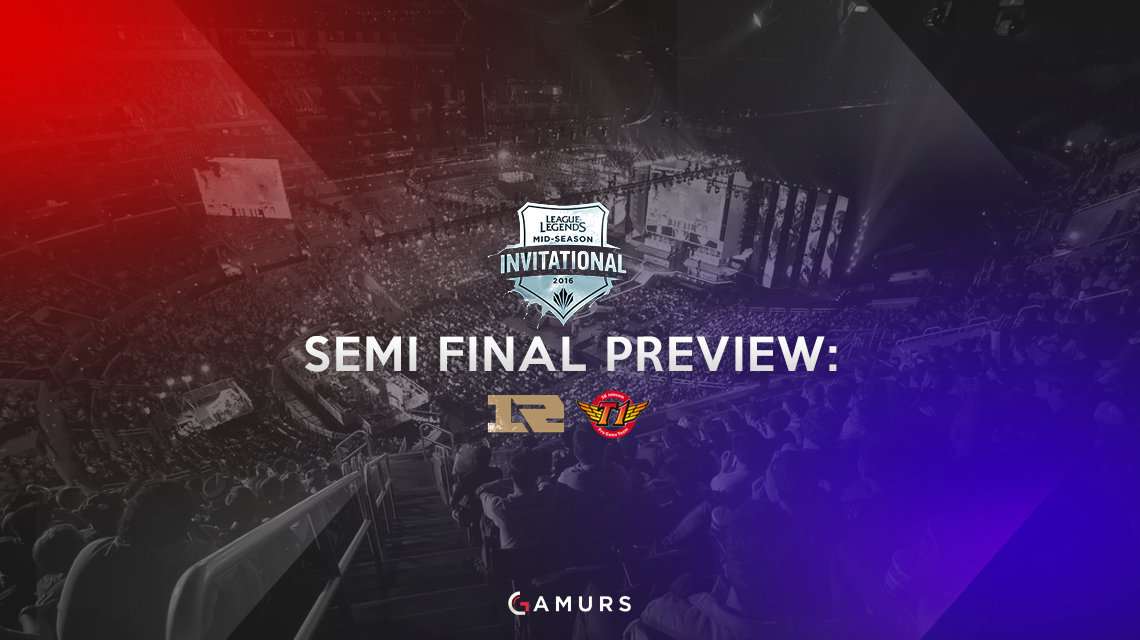 SK Telecom T1 (Korea) vs Royal Never Give Up (China)

The Mid-Season Invitational playoffs kick off with a match I only would have expected if the seeds were flipped.

The team I thought would win it all and the team I honestly didn’t even expect to make it out of the round-robin. SK Telecom T1 performed horribly for a large portion of the round-robin, while Royal Never Give Up excelled and proved that they were a force to watch out for on the Rift, but now it’s time for the playoffs.

At this point, every team should know that going up against SKT is never going to be easy. Winning a couple games against them in best-of-one series in a round-robin is impressive, but it means almost nothing compared to facing the gods of the game in a best-of-five elimination series with pride and money on the table.

This match is sure to have deaths galore, and it is the perfect way to start the MSI playoffs.

Don’t even try to say you expected SKT to finish as the fourth place team in the round-robin stage, because you didn’t expect that.

The beginning of the tournament was relatively smooth for SKT, as they defeated G2 Esports and SuperMassive to begin 2-0. Then things went sideways. Royal Never Give Up exploited SKT in a game that was much closer than the final scoreboard showed, but the giants were bleeding. Flash Wolves wasted no time in capitalizing on this, as they were the next squad to take down the Korean unit in relatively convincing fashion. On the second day of play, SKT looked unfamiliar. They weren’t playing their game and allowed the match against RNG to exceed an hour. This was not the SKT that the world knew.

On the third day of the tournament, SKT was set to face the North American champions in Counter Logic Gaming. Despite a relatively good showing from CLG prior to this game, most people expected SKT to return to form with this match. Well, they were wrong. In a closely contested match, CLG came out on top and, after SKT lost their next match to Flash Wolves, the juggernauts were on a four game losing streak.

It was clear throughout most of these losses that the teams had specifically prepared strategies to take down SKT, but it was time for them to fight back. Winning the final two matches, including a win over RNG, SKT squeezed into the knockout phase.

Here’s the thing. SKT has shown signs of weakness, but these guys know exactly how to dominate and win a game against the best of the best without even breaking a sweat. With the break in between the group play and the knockout stage, SKT has prepared for RNG and will have a specific strategy going into each game of this best-of-five.

RNG is a tough team to judge, but definitely a team to be scared of.

This team put on a display of dominance during the group stage at MSI and they’ll look to carry that over into the playoffs. Only dropping two games (one to CLG and one to SKT), RNG was clearly the best performing team of the group stage. They won matches that were wars of attrition (60:15 in a win against SKT) as well as matches that were more hit-and-run than anything else (23:18 in a win against SuperMassive).

The point is, these guys know how to win. They have the homefield advantage and the weight of heavy expectations riding on their shoulders, and they’re showing their worth so far. The All Tournament Team for the group stage is comprised of four RNG players and CLG marksman Trevor “Stixxay” Hayes. Four out of five of the RNG players were the best in their position during the group stage. They were that consistently good the entire time.

Other teams don’t know where to look, with Looper owning the top lane with his tank play, mlxg effectively ganking and roaming in the jungle, Xiahou possibly being the best mid-laner in the world right now, Mata being arguably the best support in history… there’s just too much playmaking potential on this team. RNG’s maco play has been surprisingly effective after several slip-ups from the Chinese squad at IEM Katowice earlier this year, and that improvement has made all the difference.

Who do you think takes this semi-final match? Let us know in the comments below or on our Twitter @GAMURScom and be sure to follow us to stay up-to-date on all of your eSports needs.