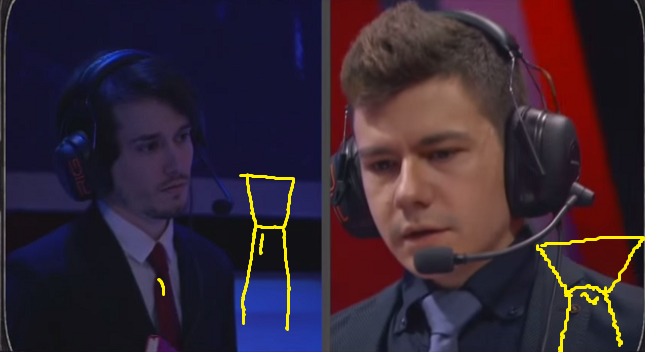 The LoLTies team back with you for some LCS Playoff tie action! We’re here to review last week’s matchups and examine what’s to come starting very shortly. Let’s get right down to it!

Lozark had it tough here in a matchup against the #1 tie in the League of Legends world in pr0lly. And to be honest, we were highly sceptical that he was going to even have a tie at all. He brought it hard with a nice blue number to combat pr0lly’s red option.

Lozark’s tie/collar gap is under control, the knot is fuss-free, he’s got a small middle dimple and the blue offsets his dark suit nicely. It’s a very solid effort.

It’s hard to see pr0lly’s effort from the screenshot we’re they’re both on-camera. What we’ve seen though is pr0lly’s usual attention to detail in his Knot and Style, however, his dimple is off-center! Not the first time we’ve seen this from pr0lly, and it’s certainly not a travesty, but when your opponent delivers a mistake-free entry and you make even the tiniest of mistakes, then we must draw the only logical conclusion and award the most startling of upsets:

As we predicted at the end of our last article, nobody tied. RIP us.

WINNER: Nobody. We all lost.

ROCCAT vs Unicorns of Love

This match went about as we predicted it did, with Sheepy bringing his trademark black tie, and YamatoCannon a bow, the same as he used to beat Sheepy twice previously. Or so we thought. We were about ready to award this to YamatoCannon for the standard “decent bow beats average-to-below-average tie” before we realized that something about the bow seemed off. After discussion with our expert consultant (Tie Senpai @nhlties) we have been forced to Disqualify YamatoCannon for a #FauxBow. Though it breaks our heart to do so.

WINNER: Sheepy of the Unicorns of Love

We tweeted a prediction that Cop would take down Locodoco and that came true, though we were disappointed in Locodoco’s forfeit:

We would have liked to see this matchup actually play out. Never lucky.

These will be short previews. Deilor hasn’t tied all split, in fact only once all year (when his team won spring split) and Sheepy will likely bring his black tie again. Win for Sheepy.

LeDuck has already shown his intent to not tie, and is up against pr0lly to boot. Win for pr0lly.

The TIP coach won’t tie again, and Zikz will crush, again. We wanted to shout out to Zikz though – he had some tie/collar gap issues earlier in the split, but he’s a baller now. He’ll be hard to beat coming out of NA.

This will either be super-close or a stomp based solely on if Locodoco no-shows again. Peter was always an inconsistent tie, but like Zikz he has become much more consistent lately. We expect Peter to beat Locodoco even if Loco ties, unless Peter abandons his recent form.

We look forward to seeing you all again for the finals preview! Enjoy the games!