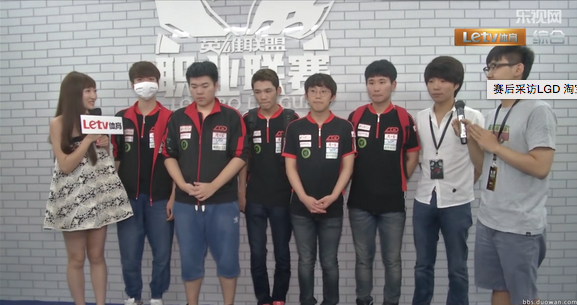 In yesterday’s League of Legends playoff semifinal match, LGD secured a 3-0 victory over EDG and have earned their place in the finals. Congratulations to LGD and thank all the players for accepting our interview. First off, congrats on the win – a lot of fans probably didn’t expect this kind of outcome. When we were interviewing LGD last time, they mentioned that third place was their goal. But after this 3-0 victory, why don’t you tell us about your performance? Starting with Pyl.

Pyl: Today, I played pretty so-so. We won because I worked well with my team.

GODV: I feel the same as Pyl. Even though I performed less than my usual standard, my entire team was really strong. So it was a natural win.

TBQ: I think I’m pretty satisfied with my performance today. I was able to pressure Clearlove, so they lost pretty quickly.

Imp: I played really well, but my teammates played even better.

When we interviewed GODV yesterday, he said there was no way to win today. You’d automatically become the runner’s up. But you beat EDG. How did this happen?

GODV: I was a bit dense at the time. In the first game, I was pressured in mid lane. My opponent got really strong. But we realized that for some reason, they couldn’t beat us in team fights. Even though we had mistakes in the first game, we were able to seize opportunities. We brought it back. We took baron. After we won the first game, we had a lot of energy. We felt like the entire team’s energy was coming out and the last two games were won because our pick and ban was worth.

In your pick and ban, I thought the second game was a bit strange. Pyl, could you explain it a bit?

Pyl: To be honest, as players, we don’t get a say in pick and ban. This is the choice of our two coaches.

Then could you explain EDG’s team comp? Where was it lacking?

Pyl: I think their team comp had too many weak points. The main thing was their play style. And after we won the first game, their play style became more “passive.” We kept capitalizing on their mistakes. They didn’t have the will to initiate any team fights at all.

I want to ask TBQ – when you saw Clearlove pick Lee Sin, how did you feel?

TBQ: Nothing, really. Either way, I don’t think his Lee Sin is as strong as mine.

When he picked it, he must’ve had a lot of confidence.

TBQ: (smiles) There’s no way he plays it as well as I do.

Next question is for Imp. I think in the match-up between Imp and Deft, Imp really shined. How do you feel?

Imp: I still have to admit that Deft is better than I am. But on the competitive stage, I play better.

Deft is your good friend. When you won against him today, what did you want to say to him?

Acorn. in the last game, you flashed to solo kill Pawn. But you were killed instead. I felt like you were really angry. How did you feel at the time?

Acorn: I felt really sorry for Pawn, so I wanted to dull the pain for him a bit.

TBQ: The buff that Acorn gave me.

Acorn, what was the buff?

Acorn: It was just some candy.