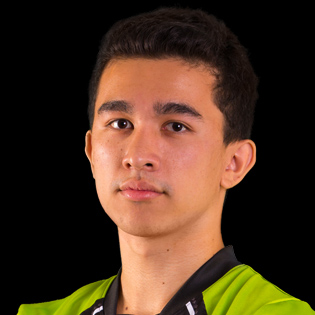 This is part 2 of an interview series with players competingin Split 2 of the 2016 Oceanic Pro League scene. Please check myauthor page for other interviews as they are posted.

Legacy Esports is an organisation that needs no introductionwithin Oceania, but for those outside the local area whoweren’t fortunate enough to catch them as they went to thefinals of the Worlds 2014 Wildcard Qualifier eventually won by DarkPassage, Legacy is a team born from the Avant Garde Ascensionroster that famously won the tournament to put them into thatWildcard Qualifier. They’ve been built around a roster coreof jungler Tim “Carbon” Wendel, player -become-coach An“Minkywhale” Trinh, and my guest for today’sinterview, mid laner Aaron “ChuChuZ” Bland.

I mentioned earlier that the tournament that led to AV Ascensionbecoming Legacy was famous, and the reason for that is that it wasthe first time the then-nigh-unstoppable Team Immunity squad wouldfall in a major event. That squad would leave the ultimately doomedImmunity org and form The Chiefs eSports Club. These twosquads’ stories would ever after be entwined. As compelling ahistory as these two clubs have built between them, ChuChuZoutlined how the history of these two teams drives him even harderto succeed: “It can be pretty frustrating at times, purelyoff the repetition of Chiefs perspective. I’ve recognized thenarrative is something that drives Oceanic League of Legends andthis pushes me to overtake them.”

After falling just short in the Split 2 finals, Legacy retooledwith long-serving top laner Minkywhale moving to coach, picking upprodigious ADCarry Calvin “K1ng” Truong and through agreat effort between the organisation and its sponsors, moved intoone of the first two gaming houses in the OPL. With this newlineup, Legacy quickly happened upon great amounts of success, withthe mechanical prowess of their side lane carries in K1ng andparticularly eventual split MVP James “Tally” Shutegiving strong performances early. ChuChuZ reflected that thiswasn’t necessarily all a specific game plan. “Werealised that with the introduction of Tally in the Top lane we hadthe ability to change our playstyle. We never directly focused onthis Top focused playstyle until semi-finals against DW where welearned over a boot camp that this was our strongest way of playingthe game,” he said.

While ChuChuZ himself identified that this meant a slightdiminishing of the flashiness of his own role, noting,“Although premier assassin player ChuChuZ was no more. Ibecame a wave clear bot to make up for the missing control that Toplane champions usually offer”, by no means did this mean hisoverall impact was diminished. He put in some stellar performancesover the split, having the best KDA among mid laners, and finishingsecond in both fewest deaths and gold per minute. Most notable washis showing on Lissandra during the split, including commandingperformances against both SinGaming and the Dire Wolves, thelatter of which received international accolades. ChuChuz usedthis to drive him to perform better, commenting, “I did seethis on Twitter and it’s awesome knowing that other regions watchus and even acknowledged me. These kinds of events no doubtmotivate not just me but any player, being recognized by anyone isone of the reasons why I strive to become a betterplayer.”

Another thing that was remarkable about the set was that Game 1was a 50+ minute slugfest in Legacy’s favour that became agame 2, 27-minute stomp. This started a trend that continued forthe majority of the last half of the split for Legacy. ExceptingInfernum, who they beat handily in week 6, and Chiefs, who theylost 2-1 to in week 9, every set was a game one struggle (39, 39and 43 minutes for Superweek, week 8 and week 10 respectively) intoan overwhelming win in game 2 (26, 22 and 31 minutes). Analysts andthe wider community began to question if Legacy could sustain theirdominance, or if they were slowing down. ChuChuZ and his team feltthat this was more individual mistakes being made in-game ratherthan the team being brought back to the pack by the rest catchingup. “I don’t think we ever looked at teams and thought theywere catching us. Every time we played a set and realised that onegame was better than the other we knew it was on our account. Wetried to focus on fixing the errors within that messy set ratherthan worry about ‘x’ team getting better. We knew that we had thestrongest roster in the OPL and it was more a matter of perfectingour team play and drawing together our individual talents,” saidChuChuZ.

Ultimately, Legacy fell agonizingly short of what would havebeen a fantastic reverse-sweep of their old rivals The Chiefs inthe finals of the first OPL split. Looking forward to Split 2, theLegacy squad are ready to add some stability to the establishededge they have in their gaming house environment. Moving into Split2 2015, Legacy were forced into replacing Egym, finding currentsupport Regret9 (then FlyingJoo) and then making two changes forSplit 1 2016. Team captain Carbon said inan interview with Red Bull that they had always looked to Split2 to be the one they expected to take down and ChuChuZ feels thattheir goals are lining neatly up with having some rostercontinuity: “I think it will give us an edge, Carbon iscorrect in that fact that we were trying to work everything out inthe Gaming House during split 1. We are one of the first teams toreally put this whole idea together and it’s a lot more work thatsitting down next to each other and playing the game. Building aschedule and organizing chores has been a part of the journey andgoing into split 2 having worked out a lot of household issues hasdefinitely given us room to show a better Legacy. I expect us totake split 2 fairly convincingly.”

Legacy will take to the rift in Split 2 knowing thatthey’ve got one of the highest-performing players for hisrole in the league who has shown he can go off on a moment’snotice. And more than that, he’s got a good sales pitch, ashe shows in the rapid-fire round of questions.

How many ties do you own?

One, not too big on ties.

My god there is too many! Cass, Syndra, Zed.

Azir, its even frustrating for me on how broken thischampion is right now.

And finally: I have a friend who is looking to updatehis gaming PC, and maybe get a new travel laptop that can do a bitof side gaming on flights. Can you recommend him a goodbrand?

Hmmm, I recall hearing from a friend about this GL552V gaming PCASUS had which went rather smoothly. Also ASUS is just great.