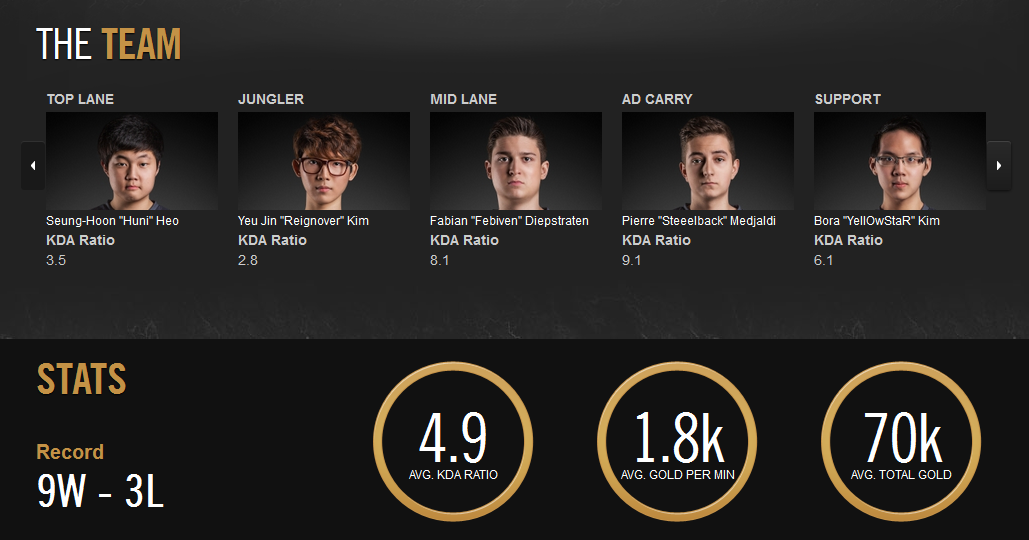 The Scenario That Shouldn’t Be

Over half of the split has gone by and one of the two forerunners was not supposed to be there. When the post-S4 Worlds player migration was taking place, one of the teams to suffer the biggest losses was Fnatic, having lost their starting members in every position minus Support.

Losing arguably the top players in their respective roles of their region is a major hit for anyone, but instead of scrambling to get as many big names that the renowned organization possibly could, the approach ended up having to rely on unknown factors. These unknowns factors came in the form of Huni, Reignover, Febiven and Steeelback, known of them having seen major success in any form.

Quite a while ago, the mention of a single element that brought oh-so-much pain to the previous team was ego.

My Life, My Ego

Ego is a strange variable that exists within the world of sports and e-sports. It’s hard to quantify, to qualify, to increase, and to decrease.

Ego is something that is developed, sometimes in parallel with other variables such as decision-making, shot-calling, success or even mechanics.

Instead of putting it into words, the most meme-worthy example of ego is NA’s once-legendary ADCarry, Doublelift, of yore.

Doublelift’s old attitude was once one of CLG’s most defining attributes, with remnants of his old ego still existing in fans’ minds.

To be fair, ego is not something evil. Doublelift did have good reason to have that sort of ego, being the definition of an ADCarry during his prime. Ego can make players strong, unlocking the mental locks over their confidence in play-making.

In fact, in many ways, Ego is much like economy, there are good and bad even if the economy is inflated or deflated.

Ego brings many baggages with it, not all of them are bad. Confidence can also come as a result of an inflated ego. Link, Pobelter, Altec and many other players with “potential” has shown doubt in their own abilities in key points of their careers, causing them to play in a way that seems contrary to what their “potential” might suggest. For them, maybe they actually need to inflate their ego.

However, ego is usually a word with a negative connotation. Inflated ego is sometimes the worst thing that could happen to a player, even if that player might not realize it. Unlike “skill-rusting” or “decision-brain-farts”, ego is one of the only things that a player can reliably keep in check. Then again, it is also one of the only things that we see plague oh-so-many players.

Composing the large majority of these players are the veterans, players that have been in the competitive scene since what seems to be the beginning of time. In the last two weeks of EULCS, Elements (formerly Alliance, 2014 summer split champions) have had to replace two members of their starting roster for X and Y reasons. Aside from the politically-correct and PR-proof reasons that have been given, repeatedly have there been rumors of lack of motivation from many of the members of Elements.

To create context, it is important to remember that Elements was (and still is) a team filled to the brim with veterans with even the youngest member having tons of experience under his resume.

Apart from the ego that their victory in the 2014 EULCS Summer Split might generate, many of these players have been characterized (for good and bad reasons) as stubborn and overall, hard to work with.

In the same way some people get offended when being given “advice” on how to do their job, trying to work with these players is a complete nightmare. With each one of these members having seen success in one form or another, simply walking up to any of them and telling them that they did A wrong, B badly and C terribly and having them accept that reality is nigh-impossible.

With their egos inflated that much, unlike the examples given in the previous section, these players needed to deflate theirs.

What A Huge Circle

Coming back to the original topic of Fnatic, it’s actually quite hard to identify the key point in their games that have brought them so much success. The skill level and ceiling of every player can’t be ignored, Yellowstar’s effectiveness as a leader and shot-caller can’t be forgotten, the introduction of coaches has to be examined, but it might be something much simpler, the existence, or more precisely, the absence of ego.

Although big names CAN be sure-shots, they also bring with them the stigma of success. Working with blank slates and molding them is in many ways a much more intelligent and economically sound strategy. In this way, Yellowstar can command his teammates to do his bidding (insert less-harsh terms) and thus achieve some sort of end-goal.

The most note-worthy case of such a thing coming into fruition is one of NA’s most dominant teams (though they have been slumping a little), Cloud 9. On paper, nearly none of the members stand head and shoulders above their competition in their respective roles. Instead, thanks to a methodical playstyle, success has come pouring onto them in ways that no other NA team has seen before.

However, even with their success, none of their members have been reported as having an overly large ego which comes in handy when they have to follow the orders of one of the most mechanically weak Midlaners Hai. Genius shotcaller and weak laner is Hai’s description but his first characteristic far outweighs his second. The lack of ego comes into effect here; the rotations, the dragon-control, the shot-calling all fall into place.

For comedic effect, imagine Hai calling a 5v4 teamfight because the enemy Toplaner is split-pushing which could effectively end the game, but Sneaky the ADCarry goes Doublelift on Hai and instead chooses to farm one of the side lanes and as a result, the game can’t close out for another 15 minutes. Isn’t that the most bronziest thing we’ve all experienced?

While I have been praising the effectiveness of a balanced ego, history has shown some outliers. The biggest and most significant one is BY FAR (no not FORG1VEN), Uzi, current ADCarry of OMG but most importantly, 2-time World Finalist under the title of (Star Horn) Royal Club’s ADCarry.

Uzi and his minions brought to the World Finals the art of “Protect the Doublelift”, something that not even the creator of this teamcomp himself could do. Such a thing should not have been possible, especially not two World Finals in a row, yet the puppy pulled through, though not always in a pretty fashion. The only good reason as to why this was possible is that Uzi’s ego is massive yet backed by an equally deadly amount of drive and skill. Although some might be ready to write off his accomplishments as being THAT protected, very few players can replicate such a thing.

Uzi demanded attention, demanded farm, demanded kills, demanded dominance. Yet he didn’t allow himself to get caught up in all this, realizing that his job in the team was not to make highlight reels but to literally put his team on his back and carry (though he usually does this while making highlight reels). On the flip-side, he was ready to take all criticism and responsibility, not being allowed to do the usual “we win as a team, we lose as a team” bullshit. After the 4th game in the Best-of-5 against EDG at the S4 Worlds Quarter-Finals, Uzi sat quietly and reflected, knowing that he could and should have carried harder, as he has shown in the first two games in the series. While in the background, the casters were going on about the “Insec Curse” (losing 2-3 after starting 2-0), Uzi knew that he is the biggest factor in their wins and losses and finally smashed his way out to a victory over EDG.

In this sense, ego was one of the factors that came into play and pushed him to overcome this feat (granted, he does show that ego can only bring you so far, though two world finals is nothing to laugh at).

While many factors do come into play in the game itself, there are as many, if not more, factors that affect players outside of the game. With the introduction of coaches to the scene with analysts in the backstage, the next logical step is to take a look into Sports Psychology. I believe that there will come a day where we hitva limit to how much you can improve in-game, so it’s a good time to see what you can improve within yourself.