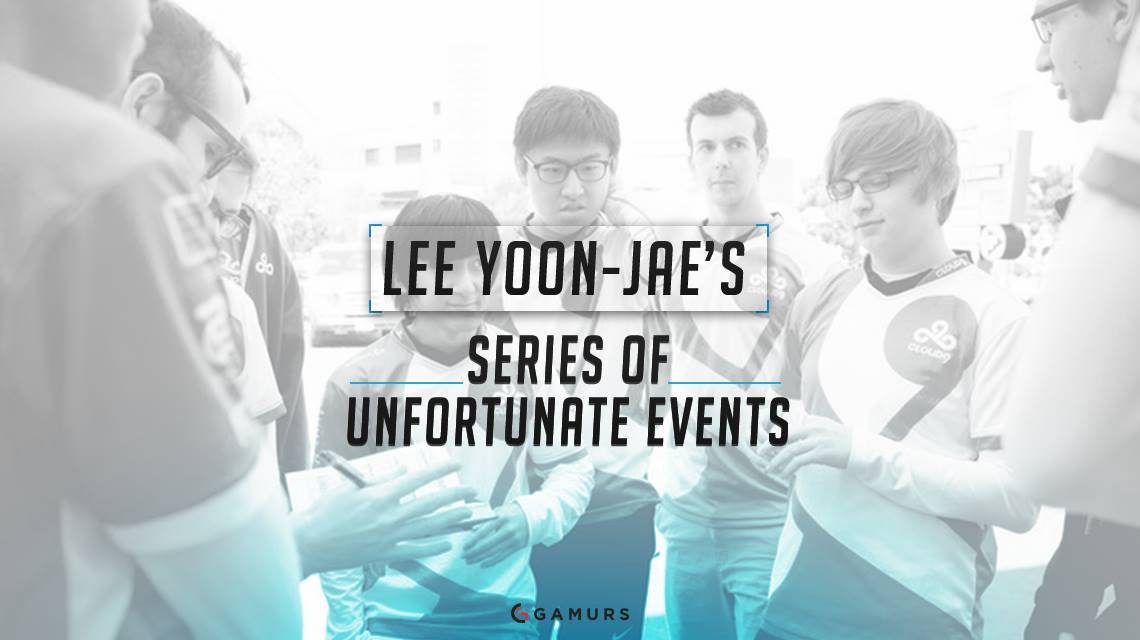 Yesterday, it was reported that jungler Lee “Rush” Yoon-jae would be returning to South Korea. It was his decision to go–Riot Games’ change to the residency rule rendered Cloud9’s original plans for Rush impossible. C9 was to use its two import spots on Jung “Impact” Eon-yeong and Nicolaj “Jensen” Jensen, and have William “Meteos” Hartman fill in the jungle until Impact and Rush would be considered North American residents. The rule change set that plan back by four years. The result was Rush’s options shrinking to play in the Challenger series for C9, find a new team, or return home.

This is simply a reminder that sometimes one is not rewarded or punished justfully. Despite being an exceptional talent from the start of his career, Rush has been plagued with unfortunate event after another, as if the heavens themselves decreed it forbidden for him to succeed.

Rush’s competitive career began in North America as LMQ’s new jungler for the League Championship Series 2015 season. The team had formerly been an all Chinese squad, but Riot Games introduced rules on importing players to prevent a region from importing an entire team. Forced to scatter, only Yu “XiaoWeiXiao” Xian remained of the original members, and he was given residency status.  LMQ rebranded to Team Impulse, and imported Impact and Rush, while acquiring Apollo “Apollo” Price and Adrian “Adrian” Ma as resident talent.

The only thing truly known about Rush was his standing at the top of solo queue in Korea. Aside from that he was an enigma.

He quickly established himself as one of the bright new talents in professional play exploding onto the scene with fierce mechanical play. He spoke some English, allowing him to communicate with his multi-national team in a common language (this was the main reason he chose to come to North America). His paltry vision control and inexperience with resisting the magnetism of kills were weaknesses in his play, but those were behaviors which could be corrected. He synergized incredibly well with Impact, giving him the early leads to handle a quarter of his team’s damage output that split. TiP finished in fourth, and Rush caught the attention of fans and analysts, earning a consideration for Rookie of the Split.

In the playoffs, TiP faced Gravity, and Rush showed up in his usual form. Contributing 75 percent of his team’s kills in the series, Rush didn’t so much as bat an eye under the pressure of playoffs. This is a trait that most have forgotten, simply due to the incredulity of what followed in the next series against Team SoloMid, and in his subsequent playoffs.

“Confused” is an accurate way to describe the thoughts of analysts with regards to Rush playing Nunu in three of the four games against TSM. He did not play it in the regular season, and it was clear that the pairing was a mismatch. A playmaker at heart, Rush was confined to painfully awkward flash snowballs. Whatever grand strategy TiP had created blew up in its face. TiP would then lose the third place match to Team Liquid, a dissapointing end for the potential finalist.  Through a misguided use of its talent, TiP had thrown away its shot for the crown.

The next season, Rush developed into a true jungle carry. On the likes of Evelyn, Lee Sin, Elise, and Nidalee, he prowled the map, outplaying the enemy. He had the most kills of any jungler by 30, easily secured the highest value at stats like DPM, CS lead, and damage share within the position. His warding improved somewhat, but it remained some of the worst relative to his competition. “I think avoiding the enemy vision is better than getting vision,” he argued. “I’m good at knowing where the enemy warded, so I just avoid it because warding (takes up) my time.” For the split, such an intuitive approach worked as he and XiaoWeiXiao decimated enemy teams.

In the final week of LCS, misfortune struck. XiaoWeiXiao was suspended, and then banned from competitive play for elo boosting until the following year. It was an alarming punishment for its severity and abruptness, and it jeopardized Rush’s career. TiP was forced to bring in Austin “Gate” Yu as a replacement, and use him for the playoffs. A downgrade to XiaoWeiXiao and a teammate who hadn’t developed synergy with his roster, Gate was less than adequate. TiP bested Dignitas, but was deconstructed by CLG. Without XiaoWeiXiao, there wasn’t enough raw talent to make up for TiP’s deficiencies in vision, and CLG’s play of the map was strictly better.

In a twist of fate, TiP met Team Liquid once again in the third place match. Liquid again triumphed, but not without Rush trying his damndest on Evelyn to reclaim his destiny.

As if losing that rematch wasn’t enough, TiP then fell victim to Cloud9’s cinderella run through the regionals to worlds. Rush’s regular season dominance was forgotten as the spotlight turned to Hai “Hai” Du Lam, for leading after unexpectedly role swapping to the jungle.

After Worlds, Rush parted ways with TiP and joined C9. “I chose to go to Cloud9 over other LCS teams because traditionally they’ve given their junglers a lot of resources and freedom,” he stated. That holds true, but Rush’s freedom came at a price. Hai role swapped to support, using his leadership as a band-aid for the team’s inability to coordinate without him. Within this environment, surrounded by minds dependant on creating situations to outmaneuver the enemy rather than outplaying, Rush’s individual play struggled somewhat. When the team was behind him, it was immaculate, but everyone had to play their part perfectly. That was a tall order, given An “Balls” Van Le’s individual decline and Hai’s mechanical deficiencies.

Cloud9 scrapped to the playoffs of spring 2016, meeting its old rival TSM in the first round. It decimated TSM artfully–Rush frolicked through the fields of death on Kindred. Then TSM demonstrated its improvements and swept the series back. Rush looked like someone who didn’t understand how competitive worked in those last three games. He invaded when his lanes lacked pressure, he held his ultimate at the cost of his life, and his team fighting was abysmal. The rest of C9 also imploded, and Rush’s final playoff in LCS ended in disappointment.

That performance combined with the infamous Nunu games a year prior taint the memories of the public as to what kind of player Rush was. It was easy to see he was a regular season god, but then people will cite those two cases as evidence he was a choker under pressure. Doing so discredits his carry performances when TiP lost XiaoWeiXiao, and ignores the catastrophic bombing of C9 and its internal issues.

C9 took the loss in the playoffs to heart. It could no longer win with Hai, and Balls needed to be replaced. It addressed both by bringing in Bok “Reapered” Han-gyu to coach the players, and it signed Impact, Rush’s old teammate, to replace Balls. All C9 had to do was bide its time for Impact and Rush to be considered residents of NA, and Rush could take to the field with a proper team. Meteos would just be used to fill the time.

Then, for the second time in his career, Riot Games brought the dream crashing down.

By resetting and doubling the time needed to be a resident, there were too many imports for the squad. C9 would not dare to replace Jensen, and not using Impact would have invalidated the purpose of the pickup. The only reasonable answer was to use Meteos. So far, it seems his skills have not dulled after spending a year away from competition. With that, Rush’s options with C9 was reduced to playing in the Challenger Series.

It would seem that is not fulfilling to him, and rightfully so. He has proven himself as a player who can thrive on the competitive stage. His thirst for blood on the rift matches his hunger for glory–something that can no longer be satisfied within NA. Returning to his home country could be the first step to his transferal to the LCK that is hopefully less cursed, or the start of a retirement much too soon.

Rush’s career is a grim reminder to us that no matter how talented we are, no matter how hard we work, life can whimsically refute us at its twisted leisure. But this refutation can be the pressure to transform a person into actualized potential, much like coal metamorphosed into diamond. When Rush shows himself, we will see if he is a broken man, or the triumphant competitor he was never allowed to be.