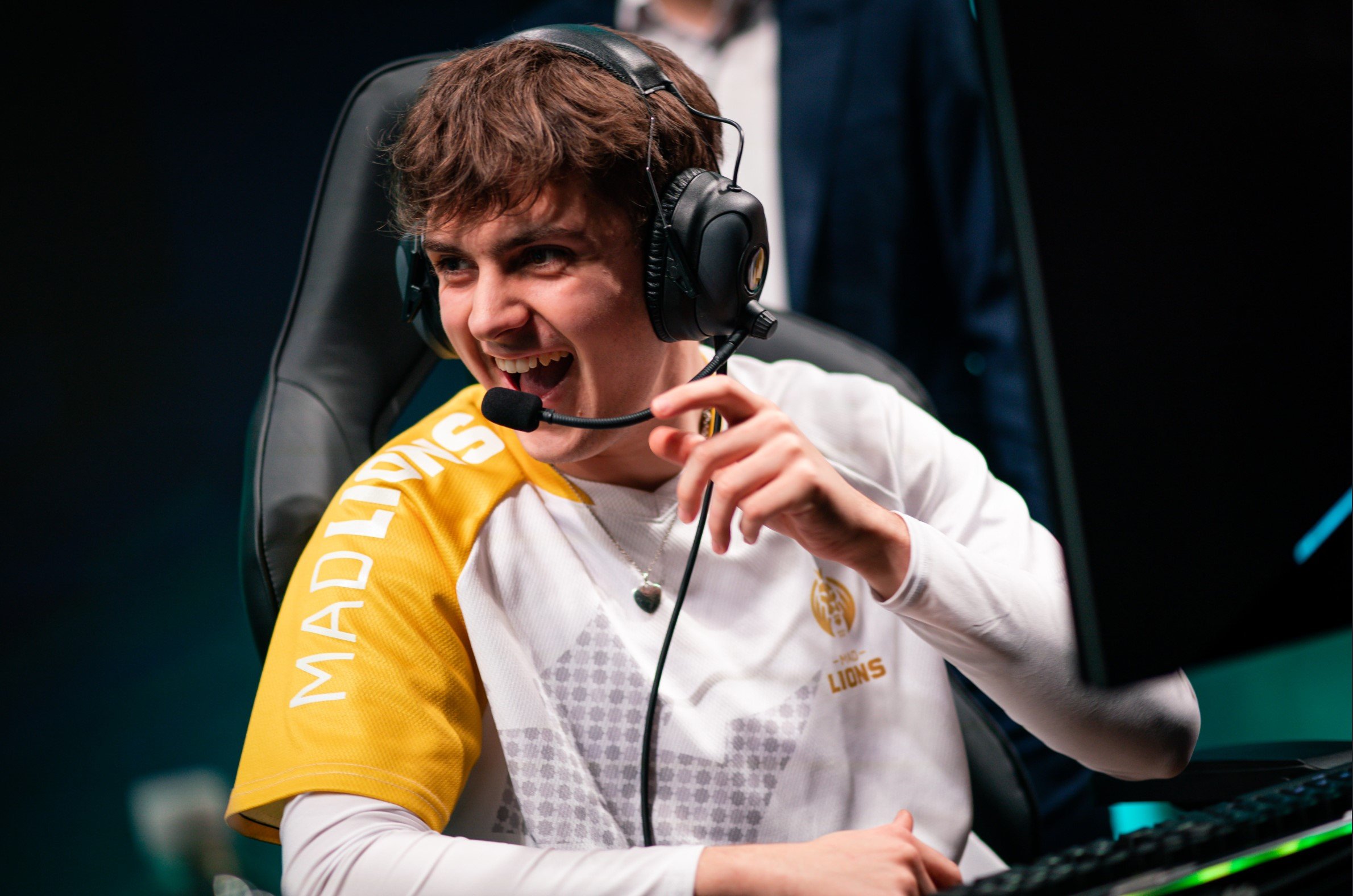 The 2021 LEC Spring Split has reached its halfway point. And with four weeks to go until the league goes into playoff mode, Europe is set to kick things into high gear.

Heading into week five, the top of the league feels more contested than ever before. A straight-up tie at the top between G2 Esports and Rogue once felt dominant and consistent a few weeks back. But now, teams like Fnatic, Schalke 04, MAD Lions, and others are all quickly encroaching the top portion of the LEC.

There’s a sense of uneasiness at the top of the LEC and all it could take is one wild week for the roof to be blown off the league. We asked our League of Legends experts how the LEC stacks up after four weeks of play and week five could be the moment where the league is completely flipped on its head.

Here are our power rankings for the 2021 LEC Spring Split heading into this week’s action.

After hitting the halfway mark of the season, Astralis, Vitality, and Misfits are all fighting furiously at the bottom of the LEC standings. Even though some of these teams have made changes to their rosters, things don’t seem to have shifted much in terms of consistency or firepower.

It’s great to see MagiFelix and Crownshot starting for an LEC roster, but again, having new members means having to adapt a new piece to an already-jumbled puzzle of players that were struggling to find cohesion. This is why teams usually reserve these types of changes for the early weeks of the split.

Misfits, on the other hand, has been stumbling along this season due to their relative inexperience in key roles. Both Vetheo and Razork, for example, are mechanically gifted but they still have a ways to go in terms of the macro side of the game, especially during the later stages of a match.

With enough time on-stage, we could see a couple of these players blossom as the team adapts to the LEC style of play. For now, though, they’ll have a hard time playing against more cohesive units with solid decision-making.

Unless one of these teams can pull off their best Schalke impression from last summer, it’s getting more and more likely that this season will go down as a learning experience for these three organizations. But they’ll try to at least keep their games competitive as we wind down toward the playoffs.

As far as this power ranker is concerned, MAD Lions and Schalke 04 are interchangeable in the four and five slots. But after their best week of the split, Schalke may have put up their biggest disappointing performance so far in week four. Broken Blade went from invincible to, well, very vincible against Armut in a loss to MAD Lions. But it’s the loss to Astralis that will leave fans hurting the most. Zanzarah made mincemeat of the boys in blue on Skarner, and while we don’t know if the new Astralis are for real, the fact still remains that Schalke went from taking down the two best teams in the league en route to a 5-1 record to falling flat against Astralis and a stumbling MAD Lions squad. We want to believe, Schalke—make this easier because right now we have no idea what you are.

Excel are hanging around. Their fans may yet be able to dream higher than seventh this year. The consistency of the soup in the middle of the LEC is thickening and has gone from chicken to pea. Similar to Dignitas in the LCS, there are neither troubling losses nor sail-filling wins for Excel after a 1-1 week with a win over Vitality and a loss to Fnatic. Week five could be more of the same against MAD Lions and Astralis, but MagiFelix might have kicked the latter into high gear and Excel absolutely need a win over MAD Lions to prove to themselves—and to the rest of Europe—that they deserve to be out of the soup. This rings slightly more true after a less-than-convincing win over Vitality, despite Kryze continuing to prove his mettle in the top lane after a good performance on Cho’Gath. The Swede has played nine different champions in 11 games, and with AP bruisers becoming more prevalent in Patch 11.3, look for Kryze to contribute more and more to his team’s (hopefully) continued upward trajectory.

SK have four wins, five losses, and one bona fide MVP candidate who has zero chance of winning the award because his team might not even make the playoffs when everything is said and done. We’re talking, of course, about former TSM Academy standout Treatz. He’s been what SK have lived and died by this split. But even in losses, he rarely looks overtly bad. His French rookie lane partner Jezu had a fantastic game on Vayne against maybe the strongest point of a last-place Vitality squad in Crownshot and Labrov.

Although Fnatic and MAD Lions haven’t exactly cracked the uppermost level of the LEC just yet, both of these teams have made the necessary strides to hang in the fray of contention up to the halfway point of the split.

Fnatic’s win over G2 two weeks ago showcased the team’s ability to find a big win when necessary. Although Fnatic doesn’t hold a share of first place alongside G2 and Rogue heading into week five, the squad is sitting just one game behind the top of the league with a solid record of 6-3. If Fnatic remain on this pace, they can easily end the Spring Split in contention for the No. 1 seed heading into the playoffs.

The team is only getting more synergized as time goes on, too. Selfmade is continuing to develop chemistry with Nisqy, while the bottom lane duo of Upset and Hylissang is quickly coming into its own. After just a few weeks, these players look like they’ve been rostered together for years.

As far as MAD Lions goes, the team’s 5-4 record throws it directly into a three-way tie for fourth place alongside Schalke and Excel. But victories over both of those teams throw MAD Lions into a higher tier after the first round robin of the 2021 season.

Early-season performances from newcomers Armut and Elyoya have propelled MAD Lions into a state of contention, while the established bot-side trio of Humanoid, Carzzy, and Kaiser has only continued to improve. It’s still going to take some time for this iteration of MAD Lions to recapture certain elements of pizzazz and flair that last year’s squad kindled throughout the course of the season, but it’s obvious that this team is on the right path.

G2 and Rogue have firmly cemented themselves as the prestigious teams of the LEC Spring Split. Although they’ve showcased remarkably different styles of gameplay, both have aptly demonstrated that they’re the best of the best—apart from losses to the god-killers, Schalke 04. Despite Rogue eventually taking the loss in their matchup against G2 last week, that 50-minute nail-biter of a game has left LEC fans waiting with bated breath for the moment we get to see these two teams face off in a five-game series.

If any of the lower-ranked teams are looking to take wins off these top dogs, they’re going to have to approach each squad very, very differently. If you want to beat Rogue, then stop them from taking early dragons. They have one of the highest dragon priorities in the league and their ability to snowball an early lead is unlike any other LEC team. They get ahead early not by taking fights, but instead by carefully maneuvering their jungler around the map to capitalize on objectives and snowballing farm leads in lane. If teams want to take them down, they’ll need some creative level one all-ins or sneaky jungle pathing to stop the snowball before it becomes an avalanche.

G2, however, are different because there isn’t one clear way in which they win their games. They can play the all-out brawl-fest or they can play the slow and steady scaling game. But the key piece in all of their various styles is support Mikyx. Shutting Mikyx down from roaming means shutting G2 down from achieving the teamfight states in which they excel—and forcing them to fight on numerous fronts breaks up the teamfight cohesion for which they’re so renowned. Whether that comes in the form of numerous ganks in the bottom lane or even something as simple as disrupting recall timers for G2’s duo, stopping Mikyx from getting out onto the map is a surefire way to slow down G2’s game plan.