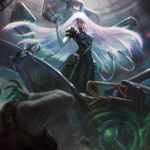 Get your wallets ready, League of Legends fans. The game’s newest spy-themed skin line PsyOps is making its debut with the 10.18 patch cycle later this week.

Riot Games is releasing a whopping seven new skins to celebrate PsyOps’ launch. Sona, Vi, Shen, Master Yi, and Ezreal are all receiving new cosmetics this patch as part of the debut of the PsyOps skin line.

Of the bunch, Sona’s skin stands out as a Legendary cosmetic item and comes with a new voiceover and transforms after unlocking her ultimate ability. PsyOps Sona will cost 1,820 RP accordingly while the rest of the skins from the line will sell for 1,350 RP. PsyOps Sona, Vi, Shen, and Master Yi will release alongside a set of chromas for additional purchase.

Ezreal is the lucky recipient of this patch’s Prestige skin. League fans can unlock Prestige PsyOps Ezreal with 2,000 event tokens from the Hextech Crafting tab while the PsyOps event is live.

Hextech Ziggs will also release this patch as the latest craftable skin and will be available from the Hextech Crafting tab for 10 gemstones. Ziggs’ new skin dresses the Hexplosives Expert in a blue and purple top hat with gem-themed goggles, and he throws glowing bombs for his attacks.

Patch 10.18 arrives on the live servers early tomorrow morning, although the game’s newest skins won’t become available until Sept. 3. League’s One For All game mode will accompany PsyOps’ debut on the same day.