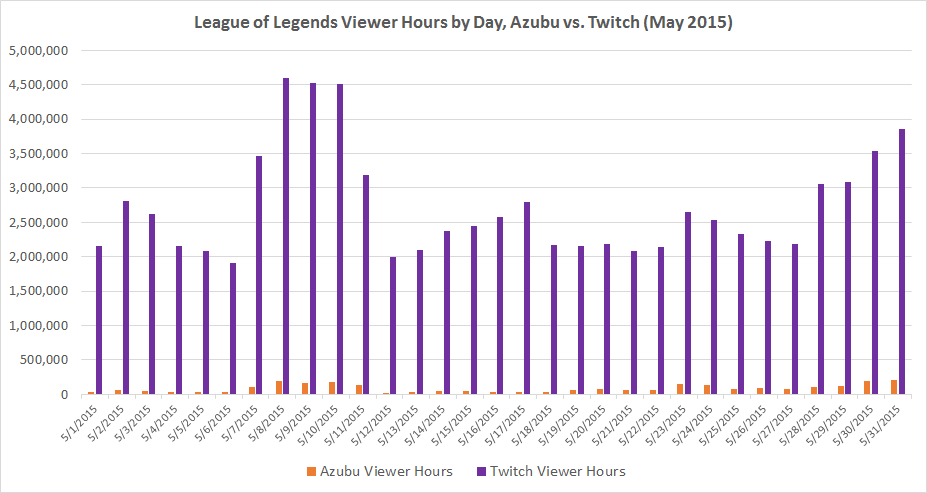 There were 87.3 million hours of League of Legends watched in May between Twitch and Azubu. Of that, 96.9% (84.5 million) of those came from Twitch.

Twitch received an average of 2.72 million viewer hours per day while Azubu received 2.73 million for the entire month.

Azubu seems to suffer from low viewer turnout on all but the largest streams. Only fourteen channels averaged more than 1,000 viewers compared to 182 on Twitch. Aside from Riot’s events, the most watched broadcaster was Faker who tallied 148,377 viewer hours, which would have put him behind approximately seventy Twitch streamers, between Turkish streamer Apophis01 and French streamer ZeratoR.

Because of the smaller community on the site, even popular, established streamers have smaller audiences than on Twitch. Kami from paiN Gaming averaged 8,237 viewers in May, a drop of 31.1% from his Twitch numbers in March, the last month his team streamed there.

Part of that smaller viewer base is because Azubu offers a much smaller variety of streamers, preferring a limited selection of higher quality content than open registration thus far. According to the company’s FAQ:

CAN ANYONE BE A BROADCASTER AND STREAM ON AZUBU?
There are streaming services that allow anyone to broadcast, but Azubu is committed to providing curated, moderated, and premium content to our users. For that reason we only allow our roster of top pro players and teams to broadcast, ensuring viewers get the best possible quality and experience.

Consequently, Azubu had 136 unique channels in May versus Twitch’s 135,859. This does lead to a higher average viewer count for Azubu streams though. For the month, its broadcasters averaged 555 viewers versus just 81 on Twitch.

It also means that Azubu has much less diversity in its offerings. While Riot broadcasts made up 23% of all LoL video watched on Twitch, first party content accounted for 53% of Azubu’s viewer time. Streamers outside the top fifty were responsible for 27% of Twitch’s viewership but only 3% of Azubu’s.

With that said, it’ll be interesting to track what effect Azubu’s new site design has on its viewership. The company doesn’t have long until another competitor joins the fray and stokes the competition further.

The following charts display stats for individual streamers. Red bars indicate a rank worse than the previous month in that category, while green bars represent an improvement. Blue bars mean the broadcaster received the same rank. Team channels, shared channels, and event streams have been excluded. All numbers are based on Greenwich Mean Time.

Bjergsen holds on to the number one spot for the sixth month in a row, and Imaqtpie retakes the the second spot after losing it in April. Sneaky climbed to his highest position yet, making it to third.

If he had streamed a bit more, Huni would have placed on this chart in his Twitch debut. He broadcasted for seven hours and averaged 16,574 viewers in that time.

With several streamers falling off this list, there was quite a bit of movement this month. Well, except at the top, where Bjergsen remains number one for the fifth time in six months. Finishing just behind him is teammate Dyrus who became only the second broadcaster to hit 50,000 viewers this year.

At the bottom part of the list, there are several debuts on this chart. Santorin usually lags behind his other teammates in viewers, but still found over 35,000 at one point in May. Huni had an enormous debut where he broke over 31,000 viewers, and Incarnati0n grabbed nearly everyone’s attention after the announcement that he signed with Cloud9. And I can’t forget Wingsofdeath who always puts up stellar numbers but normally falls just short of a mention. He peaked at 29,000 viewers in May for the number ten spot.

ipav999 took the top spot over warpomega by two whole minutes. He’s a Teemo main, so presumably he won due to some deal with the devil.

Everyone on the chart is appearing for the first time with the exception of weitoodamage, who finished second last month, streamed for 42 additional hours and promptly fell four spots. Once again, Teemo is presumably the cause.

As you may have guessed, Qtpie retained his top spot for total time watched. Having the second highest average viewer count and streaming for nearly 300 hours equals money, money, money.

Nightblue climbed back into the second spot with the success of his “Bronze to Diamond” streams. Cowsep made the chart for the first time since January. Even though his average viewer count is lower than some LCS pros or other streamers, he makes up for it in pure volume. In May, he broadcasted for over 280 hours.

If you’d like to find out where anyone on these charts, you can view full rankings by checking out these Google Docs:

If you have an unnatural affection for Excel, this is a judgment free zone. More than that, I will do my best to enable your strange passion by tweeting links to the raw data in between losses in solo queue. In other words, you should follow me on Twitter if stream data gets your blood going.