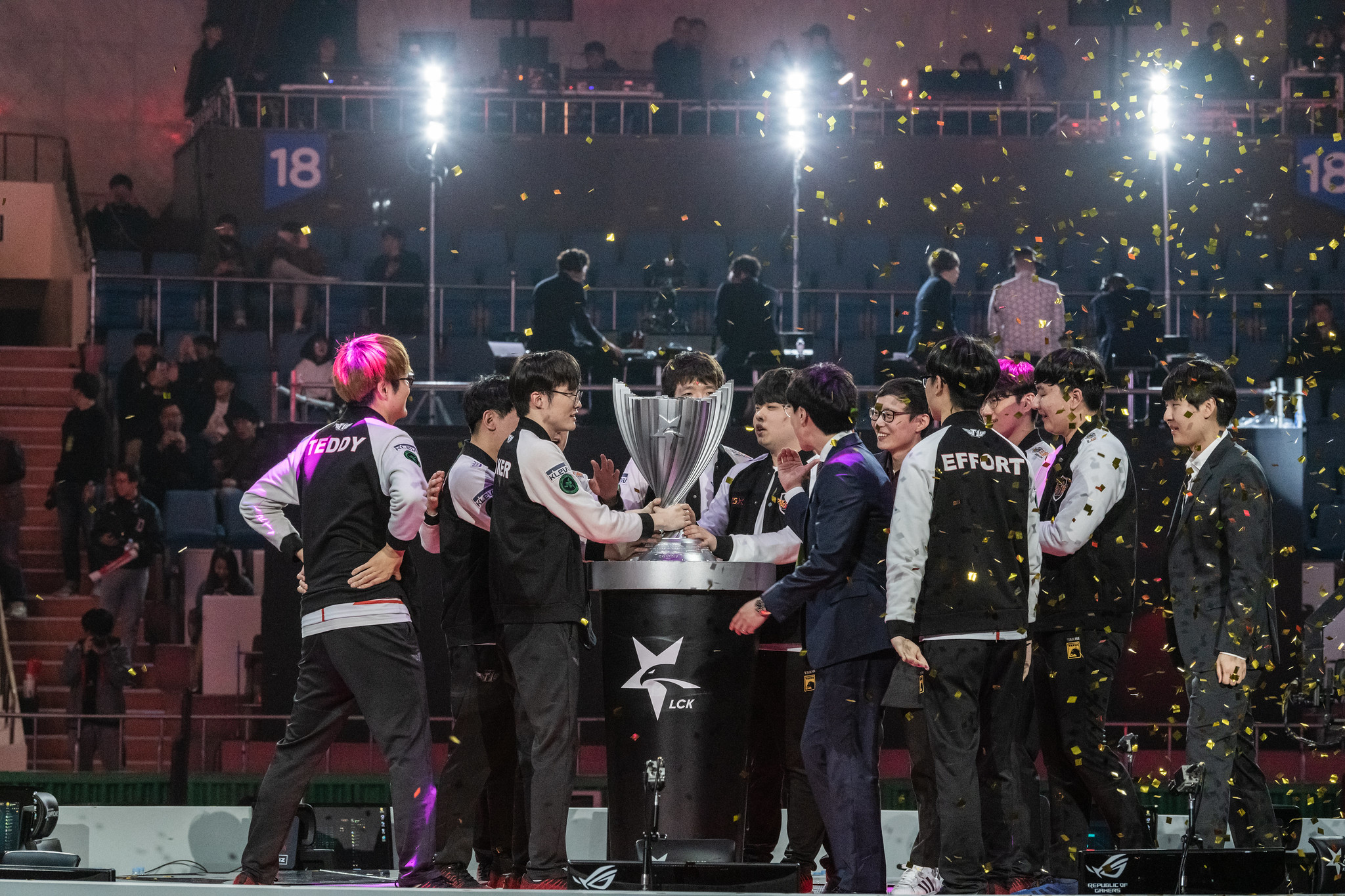 Korean League fans, rejoice—the LCK is back tomorrow. With the return of veterans, the blooding of new talent, and a redemption arc for the entire region on the horizon, the 2019 Summer Split looks to be one of the most competitive LCK splits in recent history.

We tasked our power rankings voters with ranking every team in the LCK from one point (worst) to 10 points (best). And there are a few defined tiers of teams that most people agree on.

For a full breakdown of each team, check out our pre-split power rankings below, organized into tiers.

If you’re a Jin Air fan, you might want to skip over this split. While the veteran organization has a storied history in Korean esports, 2019 has been a tale of sinking under immense pressure with a subpar roster.

They lost star AD carry Park “Teddy” Jin-seong to SKT in the offseason and didn’t pick up any outstanding talent to replace him. Throughout the Spring Split, Jin Air tried over a dozen roster variations with their 10-man lineup, but they failed to find success with any of them. They only won one series and had one of the worst records in pro play.

There isn’t much to say about Jin Air’s hopes for the 2019 Summer Split. If they somehow avoid relegation, it’ll be a miracle.

Here are three teams with history as the forefront of the second wave of Korean League. And they’ll be fighting to stay afloat in the league they once ruled. Afreeca, Hanwha Life, and Gen.G have all had storied pasts in the LCK, but have struggled in mediocrity for the first half of 2019.

Hanwha Life, once the ROX Tigers, looked promising for the first half of the spring before falling just out of playoffs contention in the final week. With Kang “Tempt” Myung-gu on the squad, Hanwha Life looked like a playoff-worthy team. Kim “Lava” Tae-hoon didn’t have the same ability to carry through the mid lane, and if they keep going with Tempt, they’ll have a good shot of avoiding relegation.

Unlike Hanwha Life, Gen.G had a woeful start to the Spring Split. Park “Ruler” Jae-hyuk constantly put up solo-carry performances, but the rest of the team crumbled around him in most of their losses. They managed to straighten things up by the end of the season, even getting a victory over Griffin. After picking up four different players for the summer, including ex-ROX jungler Yoon “SeongHwan” Seong-hwan, Gen.G will have a bit more flexibility to hopefully allow Ruler to lead the team safely to more LCK action in 2020.

Afreeca were arguably too flexible in the spring, though. They played with 11 different players over the course of the split, with star top laner Kim “Kiin” Gi-in being the only player featured in all 43 of their matches. Their constant roster shuffling, including playing jungler Lee “Spirit” Da-yoon in support for a few games, meant that Afreeca could never stabilize. In the Summer Split, they need to lock down a solid core and stick it out. Otherwise, they’ll be staring down the barrel of relegation.

The LCK middle-pack teams are a nice mix of veteran talent and new blood. Damwon and Sandbox broke onto the scene in the spring, while Kingzone made a late run for the title. And then there’s KT, who put in their worst split in organization history and are looking for redemption this summer.

KT Rolster’s Spring Split can only be described as woeful. A ninth-place finish meant they had to fight relegation for the first time in history, and they were generally outclassed by every team except Jin Air. But after handily demolishing the Challengers teams and picking up veteran AD carry Kim “PraY” Jong-in, KT have a chance to redeem themselves. Their roster is brimming with experience and longtime fans should be hopeful for a return to the top.

Damwon struggled at the start of the spring and their inexperience was showing with their reckless plays and sub-optimal drafts. But the mid-season acquisition of Lee “Flame” Ho-jong gave Damwon a shoulder of experience to lean on, and they looked like a completely new roster at the end of the split.

Sandbox, on the other hand, came out flying in the spring with a 5-0 start where they beat SKT, Damwon, and Kingzone. But everything seemingly crumbled at the end of the season as they struggled to coordinate jungle pressure across the map when they tried to push leads. Both Damwon and Sandbox should have learned from their spring mistakes, though. They’ll be two teams to watch out for.

Kingzone started the Spring Split with high hopes, and while their early season performances didn’t deliver, they looked like a top-three team by the end of the season. Kim “Deft” Hyuk-kyu was only one MVP performance away from taking the title away from Griffin’s Jeong “Chovy’ Ji-hoon and he was the backbone of that Kingzone roster. If they can keep up their end-of-season form, they’ll easily break into the two-horse race at the top.

The two-horse race: Griffin and SKT

Similar to the Spring Split, the LCK should be a two-horse race between two powerhouses of Korean League of Legends: the eternal SK Telecom T1 and the young guns on Griffin. While SKT got the better of Griffin in the 2019 Spring Split finals, Griffin’s unique playstyle netted them several victories during the regular season as they stayed one step ahead of their opponents.

But SKT got the chance to adapt to new styles of play at MSI 2019, where hyper-aggression and skirmishing resulted in picks and, ultimately, wins. SKT didn’t nail down a specific playstyle they wanted to master before the MSI playoffs, however, which made their drafts confusing.

Griffin also face many of the same issues that SKT do with their drafting. Their downward spiral after week eight of the Spring Split was a mix of teams finally countering their unorthodox playstyle and poor drafting decisions. But there’s no denying that Griffin and SKT are two of the most talented rosters in Korea, and that alone is enough to cement them as top three finishers.

The LCK starts on June 5.