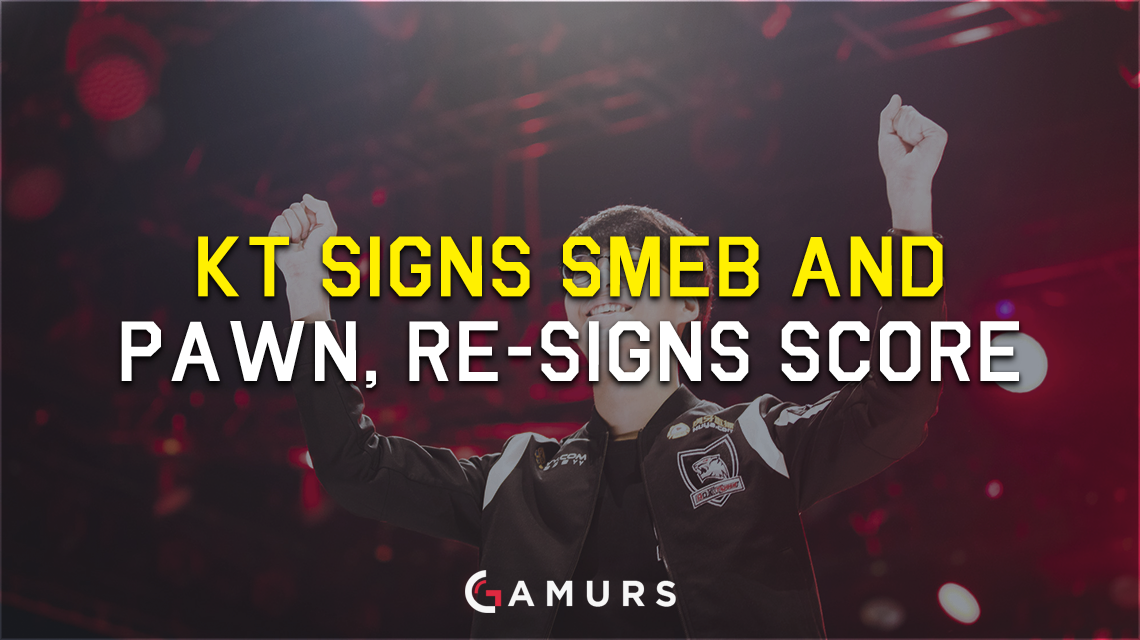 After releasing the majority of its roster, KT Rolster has signed Song “Smeb” Kyung-ho and Heo “PawN” Won-seok, and re-signed Go “Score” Dong-bin for their 2017 squad.

This news comes from KT’s press release, according to Fomos’ Park Sang-jin. This roster change comes in the wake of speculation surrounding KT’s plans to build a “superteam.” With Smeb, PawN, and Score confirmed, only Kim “Deft” Hyuk-kyu and Cho “Mata” Se-hyeong are missing from the rumored roster.

Smeb, largely considered the best top laner in the world, has spent the majority of his career playing for the Tigers. While there, Smeb grew from a lackluster performer, to the best in the world. In 2016, the ROX Tigers won the summer season of the LCK, and were favored to win the World Championship. However, the team fell short in the semifinals and lost 3-2 to SK Telecom T1. The Tigers’s roster has since completely split, and the all-stars are going their separate ways.

PawN was a part of the Samsung White roster that won the 2014 World Championship, and was considered one of the best, if not the best, mid laners in the world at the time. After their victory, the Samsung White roster split up and went to China, presumably because Chinese teams were offering exorbitant amounts of money. PawN’s EDward Gaming dominated China, winning consistently for the majority of their two years together. Most people would say, however, that the team’s crowning achievement was defeating SKT in the 2015 Mid-Season Invitational. The old Samsung White members seemingly got tired of China, though, and (aside from Gu “imp” Seung-bin) each of them are on their way back to Korea.

Now that Smeb, PawN and Score are officially on KT’s roster, all that’s missing is a duo lane. If the rumors are true, that’s where Deft and Mata come in to create the Korean superteam. SKT is now a true dynasty, and teams are preparing to take them down. This squad is seemingly hand-picked to make that happen.

Will Deft and Mata round out the roster? Can this team challenge SKT’s dynasty? Let us know your thoughts in the comments below or tweet us @GAMURScom.