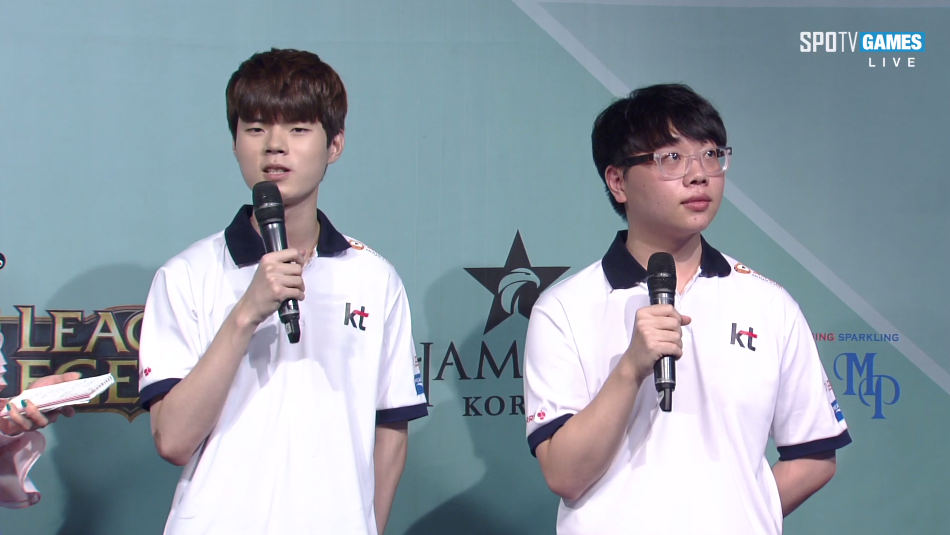 KT Rolster defeated Longzhu Gaming in a dominant 2-0 victory to move closer towards a spot at the world championship.

Despite taking down Samsung Galaxy in week eight, fans were hesitant to name KT Rolster the league’s best team. If KT Rolster truly wanted the title of Korea’s best, they would need to take down fellow top team Longzhu Gaming. Having been at the top of the standings for the entirety of the Summer Split, alongside KT and Samsung, Longzhu weren’t going to be an easy team to beat.

And game one displayed Longzhu’s resilience perfectly. KT, who drafted a tanky engage composition found a major lead early into the match through two massive teamfight victories. Unable to even defend their turrets, Longzhu looked to be completely out of the game.

But KT’s greediness, a problem apparent throughout the entirety of 2017, kicked in once again. In an attempt to end the game, KT started a fight in Longzhu’s base—even though Heo “PawN” Won-seok had only half of his health bar remaining. Longzhu used their advantage of being close to their fountain to easily turn around KT’s engage, and win their first teamfight.

Now in the late game and with a few kills, Longzhu AD carry Kim “PraY” Jong-in’s Twitch pick had finally come online. Through magnificent positioning by PraY, Longzhu started to win more teamfights—even taking a Baron for themselves. Longzhu managed to drag the game to 48 minutes before KT finally caught PraY to end the game.

KT, playing smart started to suffocate Longzhu through tons of vision wards in their opponent’s jungle. Longzhu was no longer safe in their jungle, and KT showed this by almost acing Longzhu as they tried to take some of their camps. KT, who earned Baron from this teamfight victory stomped into Longzhu’s base. Without a enemy hyper carry to worry about, KT easily ended the game to take the series 2-0.

One win away from ending the Summer Split in first, KT will face SK Telecom T1 on Aug 3. If KT can overcome their greatest challenge and finally win a series against SKT for the first time in 2017 KT will not only be automatically seeded into the LCK finals, but secure a spot in the 2017 World Championship.