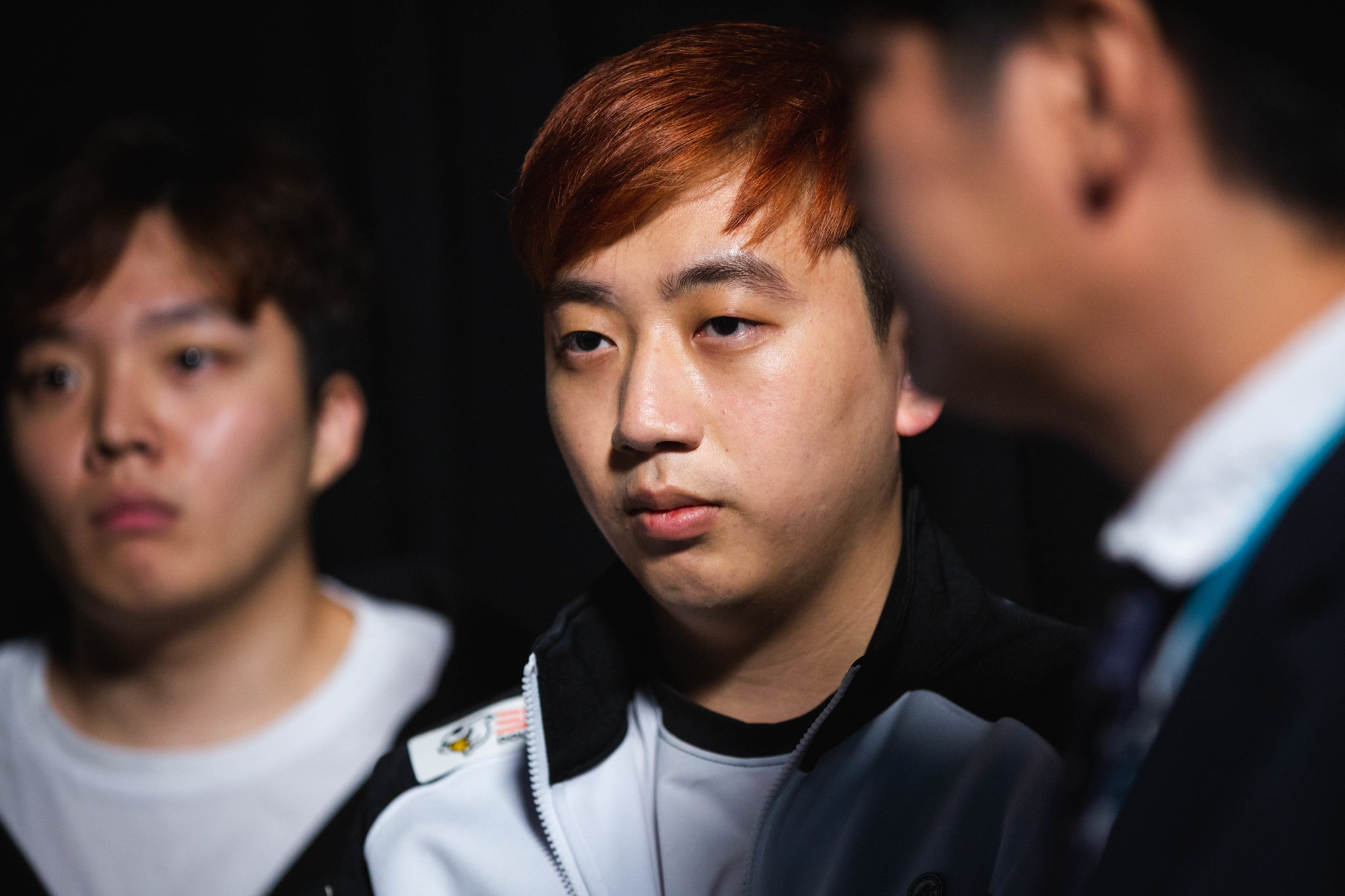 On the last night of the 2019 LCK Summer Split, after the adoring crowd left their seats and the players and coaches cleared out of the arena, one person remained, standing alone on the stage. It was the end of an era—OGN’s last broadcast of the League Champions Korea. And one player wasn’t going to miss the final tribute video.

Go “Score” Dong-bin’s career has been intertwined with that of OGN’s production of Korean League of Legends. They rose together and as his career hit its twilight stage, so did OGN’s control over the LCK broadcast.

Now, a year later, the end of Score’s career is imminent. In an interview with Korizon’s Ashley Kang, he finally revealed what many had suspected for a long time—that 2019 would be his last competitive season before he enters Korea’s mandatory military service.

With his team, kt Rolster, far out of playoff contention, Score’s career will end in Korea. There will be no more championships, no more attempts at Worlds. He’s never really been about those anyway. Even without the case full of trophies, Score will leave League as one of the greatest junglers of all time.

This is how Score became the god of the jungle and the soul of kt.

It’s been a while since a player of this caliber has hung up the mouse and keyboard. When legendary SKT jungler Bae “Bengi” Seong-woong retired in 2016, I wrote an article about him calling him the “Right Hand of God.” Playing alongside mid laner Lee “Faker” Sang-hyeok, Bengi ended his career with two Worlds trophies along with a litany of other titles. Always a jungler, he made his mark on the League world as one of the greatest players of all time.

Score’s history is a lot more complicated. In fact, even though he’s most well known as a jungler, he didn’t even start in that position. He was a top laner under his previous username, “Joker,” playing for StarTale.

That was when OGN started picking up the champions broadcast for the first time. After StarTale disbanded, Score joined the team that would become his permanent home during his LCK journey: kt Rolster.

Score ditched the top lane when he joined kt, but he wasn’t a jungler yet. In the most famous play in League history, the Zed mirror match between Faker and kt mid laner Yoo “Ryu” Sang-wook, Score’s name doesn’t appear above Ryu’s in the typical jungler spot. He’s below in the ADC spot. Even though Score was playing Caitlyn that game, he was laying the groundwork for his future as a jungler.

During his time as an ADC, the thing most people remember him for wasn’t kills or flashy outplays. It was for not dying. He set some kind of record for consecutive games without a death.

By 2014, though, the world of professional ADCs passed him by. Not dying was fine in the game’s relative infancy, but as time went on, it became important for ADCs to take bigger risks to deal more damage. That season was dominated by two players of that sort, Gu “imp” Seung-bin and Kim “Deft” Hyuk-kyu, both playing for the Samsung organization. Those Samsung sister teams ruled the League world in no small part due to the contributions of imp and Deft.

The following season, the entire landscape of the LCK changed. Numerous players, including both imp and Deft, left the region for big contracts elsewhere. And the elimination of sister teams forced the remaining players into fewer roster spots. That’s when Score gave up his ADC role and moved into the position that would define his career: jungle.

After learning how to jungle in the Spring Split, kt took a big step forward in the summer of 2015, earning the second playoff seed following the regular season. They won a nail-biting series against KOO Tigers in the semifinals and were set to face SKT in the playoff final.

There have been many defining moments in Score’s career, and that series is one of them. Score’s style has always been to jungle carefully, setting up vision, playing safe, and giving his team the best opportunities to make plays. That opportunity seemed to happen around eight minutes into the first game when Score and kt support Lee “Piccaboo” Jong-beom found Faker on a ward in the river.

Score and kt came out ahead in the initial exchange, dropping Faker for first blood. Then, the rest of SKT collapsed and despite some nice mechanics from Piccaboo to save his teammates, four kills went back to SKT. As is usual, Score was the last survivor, but he didn’t last long as SKT dove a turret to bring him down and complete the ace. Faker recovered nicely in that game, not dying again while racking up 10 kills.

That was the first time that Score fell just shy of an LCK championship. It wouldn’t be the last. In fact, he came in second twice more along with three third-place finishes. And all too often, it was Faker, Bengi, and SKT that ended his road.

As the losses piled up, we really started wondering if Score would ever make it. We fretted over whether his careful style, which held him back as an ADC, was also a detriment as a jungler. Kt’s numerous late-game mistakes begged the question: Was it because of Score that the team failed?

It was all hogwash. Score had become an absolute god in the jungle, surpassing even Bengi in renown. As the teams grew, SKT’s eye strayed from Bengi and they tried to replace him time after time. But kt turned to Score and never wavered. Losing all those times may have felt disappointing for hardcore kt fans, but at least they were right there at the end. They weren’t as good as SKT because nobody was. Knowing that, a lesser team captained by a weaker player might have folded.

But not Score. He’s been unflappable his entire career. He plays patiently and that’s how he leads. He waits for his chance and when it comes, he doesn’t miss.

The chance of a lifetime

That chance finally came last year when SKT stagnated. Without Bengi, they struggled with the jungle position all year. All of a sudden, the LCK was thrown wide open, like it was in 2015 when Score first started jungling.

But that was a long time ago, and for a while, we didn’t know what Score had left. For the first time in forever, kt tried a different jungler, bringing in Lee “Rush” Yoon-jae to see what a different player could feel like.

They quickly went back to Score. Rush is a fine player but he lacked Score’s feel for and control of the game. And the team just wasn’t built around him the same way as it was around Score. Even with a litany of veterans around him, including a world champion support, the team took its cues from Score. With SKT struggling and out of the playoff picture, Score and kt fought their way to the summer final against Griffin, an upstart team that had recently been promoted to the big leagues. With the chance of his life ahead of him, Score promptly lost the first game.

But he refused to fold. The second game was classic Score, a low-kill affair in which his objective control slowly froze Griffin off the map. Back and forth the teams went until they found themselves in a crucial fifth game. Playing Nocturne in that game, Score still stayed patient. First blood didn’t come until nearly 19 minutes had passed. But Score waited until he knew Griffin lacked the deep wards to thwart his ultimate, and then he pounced.

Fittingly, it was another Nocturne ult into Griffin’s front door that ended it. Score had done it: He had finally won an LCK title. The crownless had become a king.

“The players of our team are all great friends so I really wanted us to win a title, together,” Score said in kt’s post-match interview. “I was always sorry for all the past KT players because I couldn’t win a title for them. All past KT players were like family to me… it really hurt me that they either left or were sent away without having been able to achieve anything meaningful together.”

What should we think about the man who lingered on stage after that match and watched an OGN tribute video that felt strangely like a tribute to himself? Is he vindicated by the one title, or does the weight of all those past disappointments still linger?

In truth, it’s neither. Every player wants to win, but from the very first moments, Score’s career just wasn’t set up to be all about championships. It’s more about a player who played his style while teaching a generation of junglers how to do it. It’s about a player who made his team in his image. Kt Rolster will always be remembered as Score’s team. That’s a rare achievement. Even Bengi was an appendage to SKT, no matter how essential he was to the team’s success. If Bengi was the Right Hand of God, then Score is the God of the Jungle. Even more importantly, he was the heart, mind, and soul of kt Rolster.