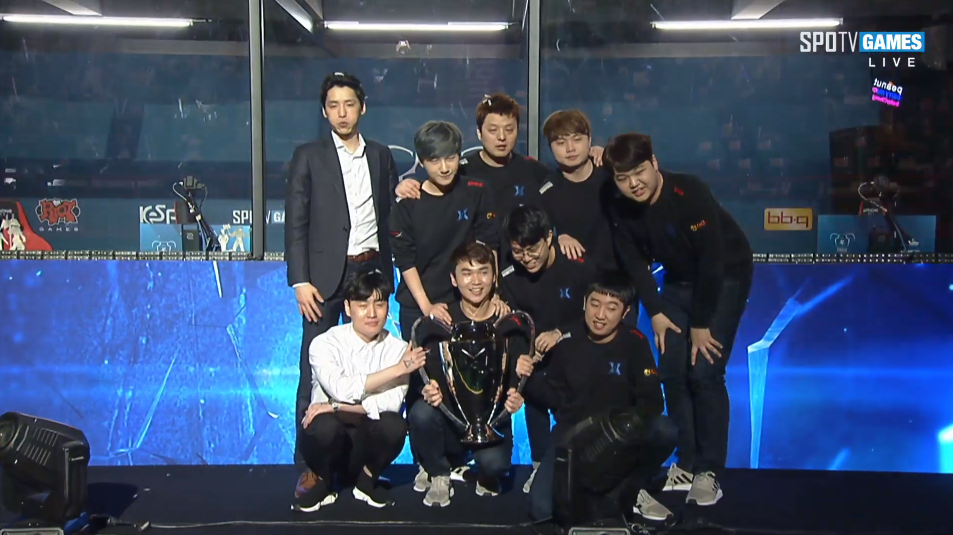 KINGZONE DragonX called upon the Daughter of the Void in order to defeat Afreeca Freecs and once again be crowned the LCK Spring Split champions.

As the overwhelming favorites in tonight’s Busan final, KINGZONE looked keen to cap off a successful regular season performance with the team’s second championship title. Following a three-week break from play after being directly seeded into the finals, KINGZONE returned to the professional stage as a mystery. Fans wondered if KINGZONE had any special picks prepared for game day, and to their delight, they did prepare something special—Kai’Sa.

League of Legends’ newest champion saw action twice during the LCK playoffs, being played once by SK Telecom T1 and Afreeca. Now it was KINGZONE AD carry Kim “PraY” Jong-in’s turn to play Kai’Sa, and he didn’t disappoint.

This series didn’t start amazing for KINGZONE, however. Afreeca punished KINGZONE’s small macro mistakes, which then gave the challengers freedom to take turrets, drakes, and of course, kills. Pray and KINGZONE did their best to make a comeback through a well-played fight at the Baron pit where Pray’s Kai’Sa tore through Afreeca, but it wasn’t enough. Afreeca simply regrouped and patiently closed out game one.

Despite being down one game in this best-of-five series, KINGZONE didn’t look perturbed in the slightest. KINGZONE had just warmed up, and were ready to play the rest of series befitting a team who just ended their regular season 16-2.

The next three games were convincing victories for a Pray-led KINGZONE, though that isn’t to say that Afreeca simply rolled over and died after their game one win. Afreeca continued to find advantages through their macro play and ability to control vision. The most impressive of these advantages were the Baron buffs Afreeca snuck through slim timeframes where KINGZONE’s vision around the pit had lapsed.

After winning their second LCK title in a row, KINGZONE’s eyes are now set on the Mid Season Invitational. KINGZONE are the first team not named SKT to represent Korea at MSI, and will head into the event looking for their first international title. The MSI play-in stage is set to begin on May 3.