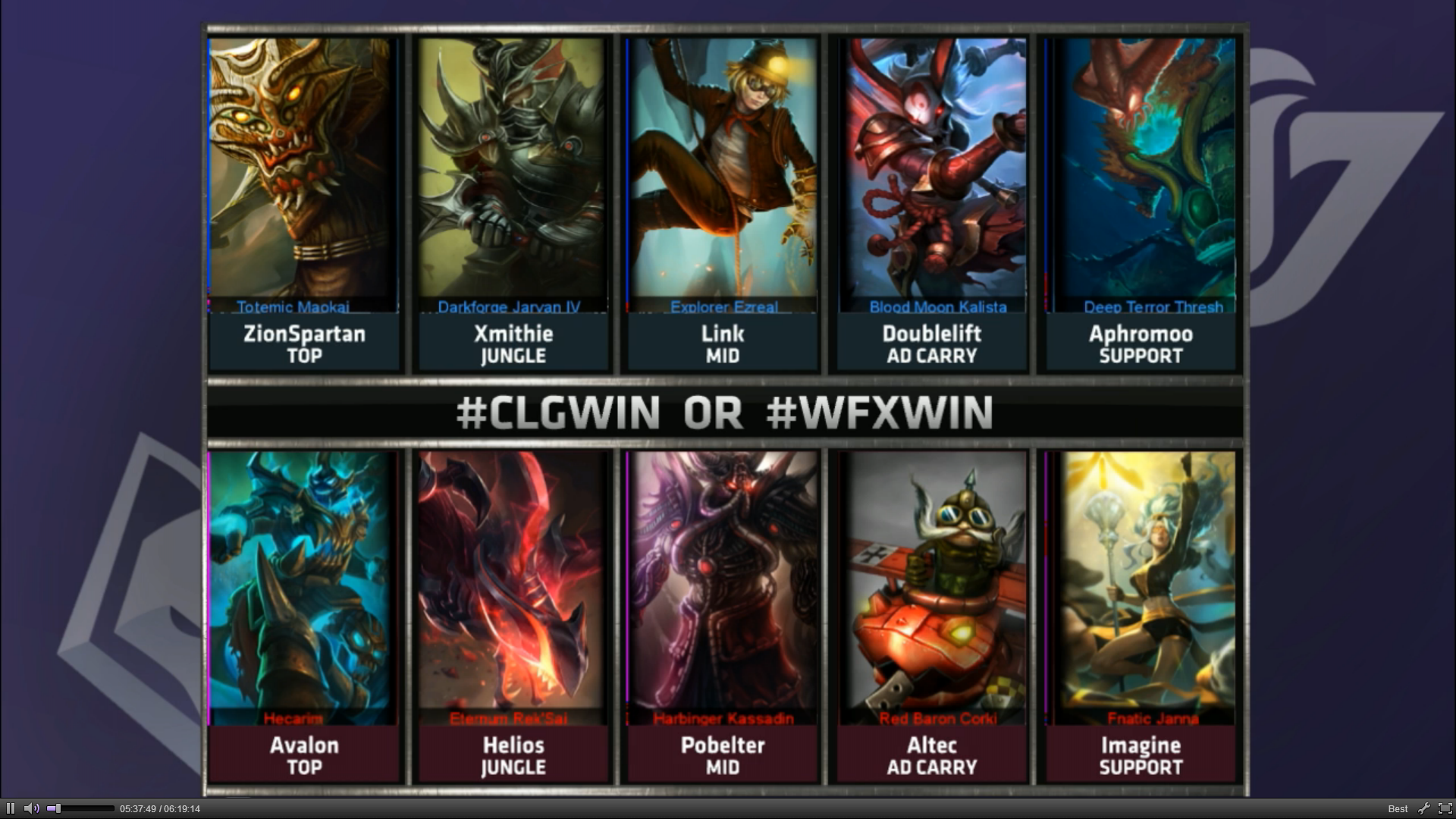 Hello everyone. With a lot of teams poorly executing level 1 strategies in both EU and NA, either by not preparing the strategy in detail or not having a proper answer to the present situation, i decide to write about how to properly execute level 1 strategy and got a great example of that in CLG vs WFX game. Since CLG played this game extremely good, exploiting weaknesses in WFX team, i will analyze whole game.

CLG should play better their ban phase, not to change what champions they ban since it is totally different subject, but to change the order in which they ban them. CLG`s bans were Zed, Annie and Sion, but their bans should be Zed, Sion and Annie. Sion is a targeted ban and it doesn`t show very much. By banning Annie as second and Kalista still open for Doublelift, they revealed to WFX that they don`t want a hard engage against them, so WFX with 2 bans left, Annie banned and Kalista open, could adjust their bans to the situation. If Annie was banned as third ban, it would be too late for WFX to answer in bans and less time for them to think about CLG team comp.

Winterfox`s ban also needs a little adjustment.  When CLG banned Zed and Annie, there was no need for Winterfox to ban Rumble, since from CLG`s bans you could tell that they didn`t want to play against hard engage, but rather to play safely with probably a tanky top laner. Instead of Rumble, they could ban Maokai or Dr. Mundo.

Before we go to level 1 strategies and early game, there is a very important thing that with proper reaction from enemy team can decide the game.

Itemization is, alongside strategy, the most important thing for early game, but is heavily overlooked by a lot of team unfortunately. Here is an explanation why.

Maokai`s itemization is usually Rod of Ages into Ninja Tabi which cost same as Hecarim`s Trinity Force without boots which would delay his Trinity even more. But Maokai with RoA and Ninja Tabi will have a lot more sustain and will be in team fight for long time. Hecarim with Trinity or boots with not completed Trinity will have only health as sustain and when he ulties, he will be melted down. Without flash, it will be even easier to kill him. Another Hecarim weakness is that he is weak in lane swap scenario, because he heavily relies on farm.

Corki`s first item is Trinity force and when he gets it he will be very strong poker and very strong at sieging. Without a boots. For same money, Kalista would have completed Hurricane plus BFF/boots+ vampiric scepter or BoTRK and Berserker`s Boots.

Jarvan/Rek`Sai and Thresh/Janna have similar builds and similar costs. Ezreal and Kassadin can be built on different ways so their item cost depends on what player like to buy first. But never the less, Ezreal have better poke ability and can easily escape Hecarim`s ulty. CLG`s team comp has a lot of escape and engage potential, which is bad for WFX team comp.

CLG wanted to lane swap for 2 reasons: to give Doublelift free farm on Kalista and to deny Hecarim from farming. They invaded properly with Link placing  ward in the middle of his lane, but still they made 2 mistakes.

CLG invaded through the entrance to red buff, leaving unwarded top side of the map. That would allow enemy team to sneak from behind and set up a trap. Scenario like this is very rare and only possible if red team is sure that you will invade their red buff so they want to counter invade or set up a trap.

The wards that CLG placed on top side are excellent, but the Link`s ward is problem. He placed his ward at 0:37 which means that ward will expire at 1:37. That 18 seconds to buff spawn would allow enemy team to invade from mid lane and potentially ruin your invade. Simply mid laner must wait till 0:50 or be present when ward expires.

Since Winterfox controlled the area around dragon, they wanted to use it to kill the dragon. CLG could prevented that easily by roaming to dragon with Aphro from either jungle or mid lane. You can go through mid lane for simple reason that you are going to stop them from killing the dragon, not in secret mission to kill them and take the dragon. They would lose some health and with that dragon invade you would force them to recall earlier and by recalling earlier their jungler and top maybe wouldn`t have money for all items they wanted, which would reduce their clear speed.

This is the biggest mistake you can do in a lane swap. On top side of the map CLG have Kalista, Thresh, Jarvan and Maokai plus mobile mid laner.  Since they have pressure on top lane with a player advantage, it is natural that you expect CLG to ward it which they did. You know they have wards and yet Helios and Avalon still invaded as Rek`Sai and Hecarim without Doran and without flash, so no escape tool against Jarvan knockup and thresh hook. As expected, they got caught and died giving 2 huge kills to Ezreal.

Jarvan locked down Helios and Imagine allowing Doublelift to get free auto attacks on them. Helios was non factor here because he didn`t had ulty nor items. Why would you force a 5v5 team fight when enemy team have clear advantage of levels, items while your top laner doesn`t ulty.

This is an overagression from Altec without any vision, but also a great reaction from Aphro who saw the opportunity here.

Next couple of minutes are CLG dancing around waiting for Dragon, killing dragon and then moving toward top side of the map.

Hecarim misses his ulty on Doublelift and it forces WFX to retreat, but an excellent Cataclysm comes from Xmithie forcing flashes to get out of it. Aphromoo`s flash hook got them another kill and at this time the game was finished.

In this game CLG played and executed extremely good level 1 strategy and punished every mistake WFX did. With some polishing here and there, they can become very good and dangerous at early game which is crucial to be competitive at international level.