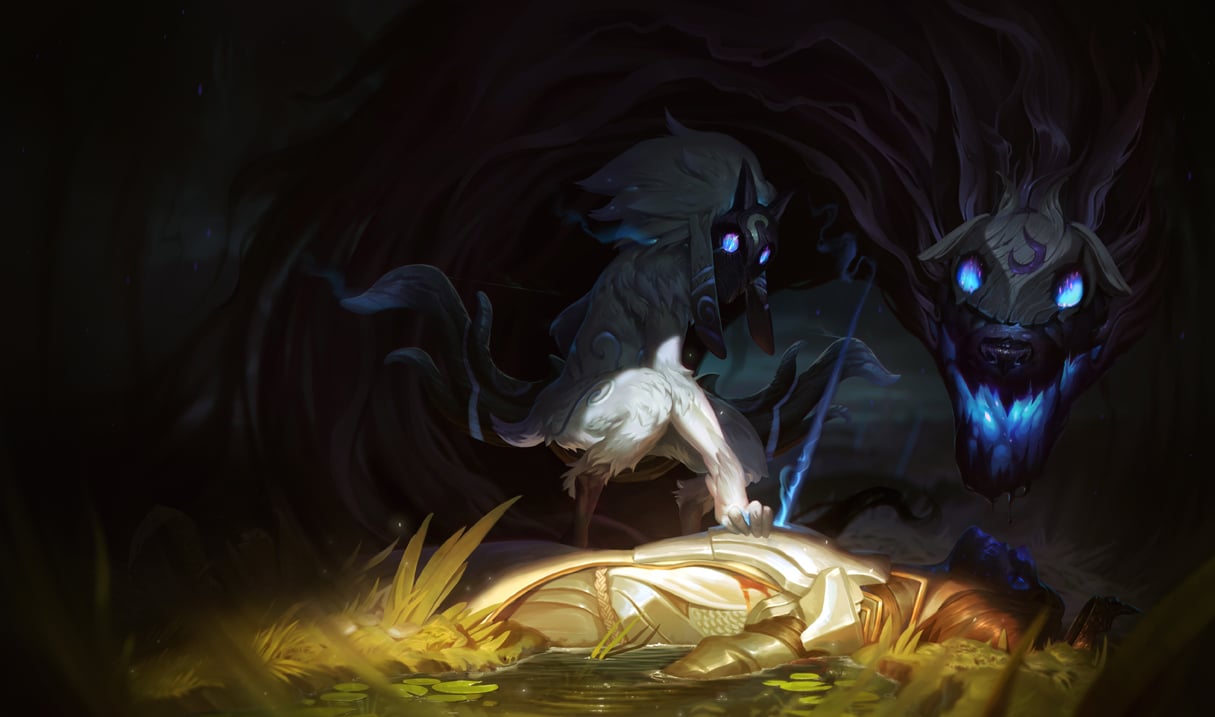 Big reworks of Kindred, Mazahar, and Rek’Sai are all arriving in League of Legends tomorrow in Patch 7.11, according to the official notes.

It’s been champion update after champion update for the past few patches of League. In Patch 7.9 there was the big vanguard tank subclass updates for Sejuani, Zac, and Maokai. For the last patch, Patch 7.10, Rammus and Heimerdinger both received overhauls. Tomorrow’s Patch 7.11 will keep up the trend, and big changes will be made to some of League’s newer additions, Rek’Sai and Kindred, as well as Malzahar, who’s been in the game for quite a long time.

The death spirits are joining in on the “ADC in 2017” meme tomorrow as their rework aims to gut their abilities into a proper ADC arsenal. When Kindred were released, they were meant to be an ADC that could work well as a potent jungler. Unfortunately, they became an on-hit ranged champion that dealt significantly less damage than other champions in the same field, like Kayle or Kog’Maw. They haven’t really found their home in the meta yet, and now, Riot is taking the rework buzzsaw to their abilities so maybe they can finally realize the ADC fantasy.

To make this dream come true, the first part of Kindred’s kit to come under fire had to be the passive. Now, rather than dealing bonus on-hit damage, stacks to the passive will increase her attack range and amplify her other abilities. Outside of that, there’s one big change coming to most of Kindred’s kit—tons of AD. The bonus AD scaling on almost all of their abilities is being jacked up really high, which means you can say goodbye to Blade of the Ruined King and Runaan’s Hurricane item rushes, and you can say hello to Death’s Dance, Essence Reaver, and crit items. Overall, with some AD items, she’s going to deal significantly more damage than she did before.

There are some other changes coming to their abilities as well. For example, each cast of the Q will now also boost Kindred’s attack speed. Damage was also shift around on the W to deal more damage each time Wolf attacks, and the E is now an executing ability, which means it deals a lot more damage when the target is low on health. Expect Kindred to make a comeback in the meta, and it’ll be a big one. This should also make her a viable option in bot lane.

The Prophet of the Void has been updated a couple times already. First, he was updated during the Midseason Update of 2016, and then again during the Preseason Update a few months later when Riot decided the first update didn’t really fix much. In his current state, his former power in the mid lane is almost nonexistent, and his abilities as a support are so oppressive that there’s little counterplay in bot lane. Whatever nerfs are made to stifle his bot lane performance just make it that much more difficult for him to play as a mid laner, so he needs a third rework, and that’s where we’ll be tomorrow.

This third rework is adding something to Malzahar’s kit that he hasn’t had in a long time—burst damage. There isn’t much to say about the changes, because they’re pretty simple apart from his Voidlings. Both his Q and E are going to deal more damage and scale harder with AP, and his ultimate is going to deal a lot more damage. Seriously, don’t underestimate how much damage his ultimate will do now, because the numbers are crazy. The Voidlings on his W, however, are going through more complicated changes.

To compensate for the flat damage buffs on his other abilities, his Voidlings needed to be tuned down, since they’re the root of the evil to begin with. The W will now function using a stacking system, and Malzahar can gain stacks by using other abilities. Don’t worry though, he can’t spawn a million at once anymore, because the maximum stacks he can have is two, so he’ll be able to summon two at once. They also won’t last as long after being summoned, and they have actual health bars now rather than a hitpoint type of system. If you hit them with a regular old basic attack, though, they will instantly die.

Rek’Sai is going through a similar treatment as Kindred. She’s melee, however, so more AD means she’ll be more of an assassin or diver, rather than a marksman. That’s holistically what Rek’Sai’s update is about. She was designed to be a terrifying underground assassin that could strike at any time, but she turned out to be pretty much the opposite of that as a vanguard tank. This rework will bring her back to her roots. Because roots are also underground. Get it?

The base damage has been lowered on most of her damaging abilities, and instead, the bonus AD scaling has been raised to the skies. In other words, AD items will make her blow you up faster than you can type in all chat, “Was Rek’Sai changed in this patch or something?” Her ultimate ability is also being completely changed to take away her incomparable map pressure. Instead of zooming across the map to any one of her tunnels, she will dive into the ground and shoot out in front of her victim, gashing them and dealing a lot of damage. It’s an executing ability, so the lower the health, the more damage it deals. Imagine if Garen couldn’t be kited while he was running at you to kill you with an ultimate, because that’s basically what it is—an unkiteable Garen ult. Scared yet? You should be.

That’s not all, though. Her tunnels and unburrowing knock-up are being shifted around to match her new assassin identity as well. She’ll be able to dive into her tunnels much, much more often, and when unburrowing, she’ll only be able to knock up one target at a time. Expect to see a lot more Rek’Sai after this patch, because she’s probably going to be even stronger than Kha’Zix and Rengar after this rework.