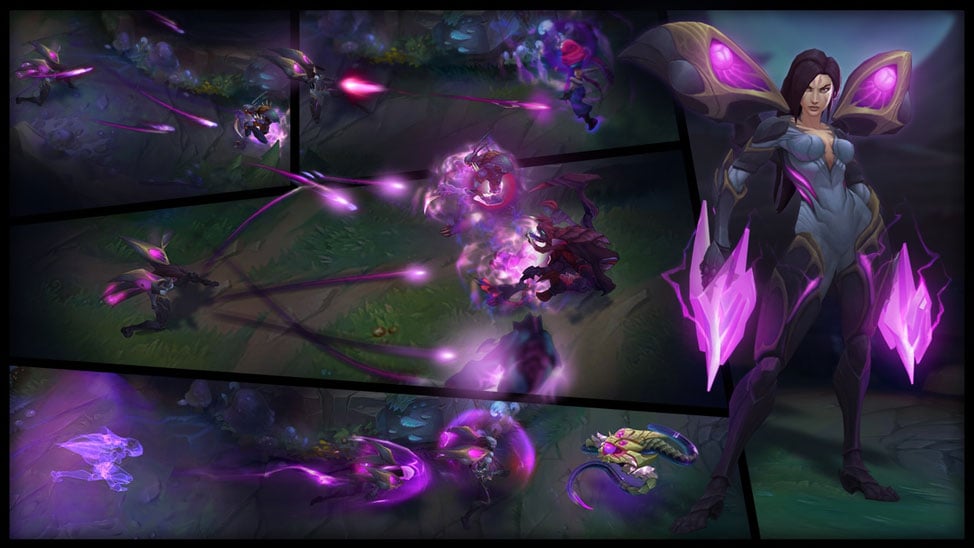 Kai’Sa is one of the most popular ADC picks for regular League of Legends players and pros alike.

Her kit is one of the most complex and diverse available in the game—not just on other ADCs, either. She packs more creative freedom in her playstyle than most other champions altogether. By stacking AP, AD, or attack speed to 100 (or 100 percent in attack speed’s case), you can transform her abilities to match different playstyles, opening up more possibilities for her than even Kayn.

With this quick, top-level guide, you’ll learn how to build her, play her, and hopefully not act like you’re in Bronze with her.

As we mentioned, Kai’Sa can build AP, AD, or attack speed and remain effective as long as she builds them in the correct scenarios. For instance, flat AP is best used for reliable burst damage, but full AD and crit are used for high-risk/high-reward bursting due to relying on crits. The attack speed and attack speed hybrid builds work best against teams with tons of tanks, and they put out the most consistent and reliable DPS due to her true damage passive.

Here are the best items to run depending on which build you choose, in order of effectiveness. Keep in mind that the later into a build you go, the more situational items become.

This build puts out the most damage by a fair margin but doesn’t burst quite as hard as the raw damage builds. By building significant stats in AD, AP, and attack speed, this build also allows Kai’Sa to evolve all three of her abilities, which is a huge benefit. The downside is that this build needs time to scale, at least for Manamune to convert into Muramana.

This build allows you to evolve her Q, which amps up the number of missiles fired. The raw AD granted by Stormrazor alongside Infinity Edge makes her extremely deadly for squishy champions.

This build allows you to evolve all three abilities. It’s the build to go when you’re on a team full of AD-dealing champions and you need some mixed AP damage. Even if you go for AP, you still need Berserker Greaves to have a bigger damage output. Your passive scales with attack speed well and the lack of attack speed could hurt you a lot.

This is the most popular build by Kai’Sa players right now. It grants a powerful damage spike early on and the Stormrazor slow allows you to kite champions easier or get picks with W>R>auto.

You have a couple of options with runes on Kai’Sa because you can take different rune paths to stack certain stats, making it easier to evolve one ability over the next. We’ll only get into Keystone runes, though, because the rest is mostly situational.

Press the Attack is the best Keystone you can pick for Kai’Sa, whether you’re building her for attack speed or crit. She gets the highest value from it, especially in the early game, making it so both Kai’Sa and her support deal higher damage in trades. The Inspiration secondary tree will grant you the needed sustain early with biscuits and grant you free boots at 12 minutes.

While the core in the alternative rune build is the same as above (Press the Attack, Legend: Bloodline, Coup de Grace), it does provide a better teamfight-oriented build via the secondary Sorcery tree. The movement speed granted from Nimbus Cloak when using a summoner spell will allow you to kite easier and run away from a fight if needed without hassle. The lack of biscuits compared to the Inspiration tree will hurt your laning phase, so calculate if the trade-off is worth it before you take the alternative rune build.

As we’re sure you can guess by now, there’s a lot of freedom to your ability build path, too, just like your items and runes. Thanks to the ability evolution system on Kai’Sa, she can prioritize one over the others in certain games, while doing something completely different in another. As you can imagine, this is primarily what dictates the fighting style you should use in-game.

This is the most popular build for Kai’Sa players. It boosts her burst damage while granting her reduced cooldown on her survival ability. This ability build allows Kai’Sa to throw down in team fights better than her other builds. The bit of raw AD and AP from this build’s items keep the W and Q up to snuff with damage, too.

This build relies on both Q and W for damage and less on survival through her E max. While her W has better AP scaling compared to her Q, the Q ability is your primary damage tool, especially at low ranges. If you don’t max it, you’ll have issues with clearing waves and bursting people down when they get into range.