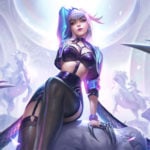 K/DA are returning to the Rift with a new EP and sparkly aesthetic later this week. The League of Legends pop group is getting a new set of skins in Patch 10.22 themed around their recent pre-release single, “THE BADDEST.”

The skins feature group members Akali, Evelynn, Kai’Sa, and Ahri in their blue, purple, and silver stage attire. Seraphine, League’s newest champion, is joining K/DA on-stage for their comeback and will be featured as a guest artist on one of the group’s newest songs from their upcoming project. The Starry-Eyed Songstress’ release skin will cost 3,250 RP as an Ultimate skin and will depict the champion on her journey from indie artist to world-class singer.

Related: Jhin, Orianna, and Shen have the highest win rates of any champion with at least 10 played games at Worlds 2020

The ALL-OUT skins for the original four K/DA members will cost 1,350 RP each. Ahri, Akali, and Evelynn’s skins will release alongside a set of chromas for additional purchase, while ALL-OUT Kai’Sa will receive this patch’s golden Prestige skin, which will cost 2,000 event tokens.

Fans of the pop group can purchase their new ALL-OUT skins when they release in the client store on Oct. 29.