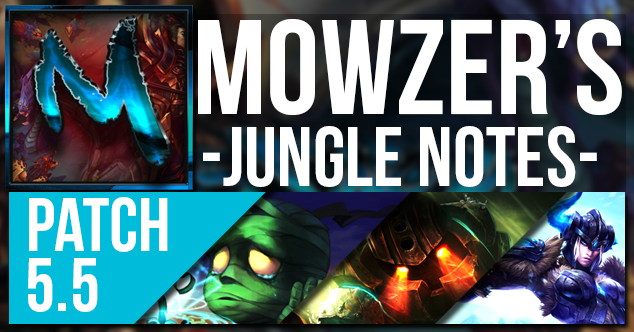 Hey Everyone. Mowzer here. There were a lot of changes this patch and I decided to create a list of all the changes affecting the jungle. These notes will focus on changes directly impacting the jungle and junglers. I will not be going over every change in the patch. For the full list of changes check out Riot’s official patch notes for patch 5.5 here. This article is broken down into four parts, jungle changes, item changes, champion changes, and predictions.

Impact: Less damage taken in the jungle allows junglers to stay out longer to either gank, farm, or secure objectives. Also, it means that junglers will be using less potions to sustain themselves in the jungle.

Impact: Clearing the entire wolf camp will now provide 11 more gold. This is not a massive buff, but every bit of gold counts. A little extra income here and there is not to be overlooked.

Impact: This buff appears to be directed toward tank/tanky junglers and help them scale better and clear faster. This is a good buff for any jungler that has higher HP. I can see this being abused by junglers such as Amumu. The gromp buff will synergize nicely with cinderhulk (the new enchant that replaced juggernaut).

Impact: This isn’t a massive change, but is a mild buff to junglers such as Malzahar and Shaco. Malzahar’s pets will now be able to move faster and Shaco’s clone will now move at his pace. This means he might be able to fool enemies more easily or just inflict damage on his targets.

Conclusion: These changes are welcomed across the board by Junglers. We will have more health to get more xp, gold, ganks, etc. This should result in more power being shifted toward junglers. Add in the marginal gold increase on wolf camps and you have stronger, easier to play jungle. Tank junglers will be able to clear faster and inflict more damage to targets attacking them with the new gromp buff.

Three items have been added (two jungle and one AP) and there was a nerf/change on the tier 2 sweeping lense trinket.

Impact: Tank junglers will now be able to afford a cheaper version of sunfire that will allow them to clear camps quicker.

Impact: This item replaced the old green, juggernaut enchant. Tank junglers will now be able to stack greater amount of HP and afford a sunfire-like item that will allow them to deal greater damage over time and clear camps faster. Sadly, this item no longer grants tenacity. This means tank junglers either have to rely on the 15% reduction to CC that legendary guardian provides in 21 points in defensive masteries or get merc treads. Also, sunfire will not stack with Cinderhulk enchantment. This seem insanely sttrong on tanky jungles such as Sejuani, Nautilus, etc.

Impact: I am not exactly sure how I feel about this item. Perhaps it can be useful on AP junglers such as Diana, but I need to test it a bit more before I make comments on how useful or useless it is. RIP DFG, you are and aren’t missed.

Impact: Riot noticed that the tier 2 version of sweeping lens had a lower cooldown than what it upgraded into. This means it will take longer for red trinket to come off cooldown to clear wards, Teemo mushrooms (rot in hell you demonic being), Shaco boxes, etc.

Conclusion: The item changes are aimed at tank junglers. I think the new item(s) will allow for various tank junglers, such as Nautilus, Amumu, Volibear, etc., to become more viable. I am predicting Sejuani and Amumu will do really well with the combination of gromp buff and cinderhulk.

Impact: This is a mild but effective buff for jungle Gragas. He will have a bit more mana in the jungle to clear and deal more damage.

Impact: It seems Riot is shifting the scaling of Nautilus away from AP and more toward HP. This is a good buff to his damage when stacking HP now. His E doesn’t deal as much damage or slow for as long, but it will be on a shorter cooldown.

Impact: This buff appears small, but it is a welcomed buff to her damage output. This patch was aimed at buffing tanks and this will allow for her to inflict more damage against tanks. Also, this will help her clear the jungle slightly faster.

Impact: The buff to Q might seem small, but remember that he spams Q a lot and the damage does add up. Most don’t max E second on Skarner, so this buff will not impact a lot of players early on. It will increase his late game damage or spawn a new approach to maxing E second or even first. I need more testing before I can state more about the skill order selection.

Impact: I love these changes to him, but what were you thinking Riot? Rito, please! This is a huge buff to top Trundle. Yes, it helps his jungling, but this is going to have a greater impact on his ability to top lane than jungle. I can see a lot more of top Trundle being picked against the tankier tops and possible incoming rise of tank junglers.

Impact: This is a good buff to help the bear out in the jungle. He will be able to clear faster with having W off CD faster and he won’t have to worry about not having it to gank with. It’s a similar buff to what Cho’gath received a few patches ago with his R.

Impact: Ghetto Jarvan got a great buff here. He will be sustaining for more in the jungle and dealing more damage to camps and champions alike. Maxing E first allows how him to stick to his targets more often and clear camps relatively fast.

Impact: This buffs appear minor, but they will have a big impact on Zac’s top lane and jungle. He will be able to spam W more often to clear camps and the knockup means he will be taking less damage.

Conclusion: Riot is trying to bring a lot more champions into the mix for jungling. Tank junglers will, hopefully, be on the rise. I predict some of these buffs will increase the play of some champions in the top lane too. I welcome all of these changes.

Impact: A nice change to make it easier for Rek’sai players to keep track of their tunnels.

Impact: This an adjust to top and jungle Sion. His Q will cost less mana and dish out more damage, but his E will now cost him more. This will make it more difficult to farm in lane, but will help with clearing the jungle. It’s a win-lose situation.

Impact: Vi isn’t going to be getting around as fast and her R damage early on has been nerfed. She’s still really strong, but this change will be felt. I need to stop putting junglers I enjoy as #1 on my tier lists. Every #1 jungler on my list has been nerfed in one way or another. I’m joking, Riot doesn’t check my tier lists. It’s just bad luck. Maybe I should put Riven as #1.

Impact: This looks like a change aimed at her ability to shred the HP of tankier champions. I would say it’s a big nerf against higher HP targets and a normal nerf toward squishes

I think a lot of tank junglers will rise from the items added, jungle changes, and jungle buffs/nerfs. It is unclear right now how strong various junglers will be. I think some junglers will be able to abuse the gromp buff or cinderhulk, such as Sejuani and Amumu. I can see a rise in picks for Trundle and Zac on the top lane. Tank Sejuani seems like she will become rather powerful with the new cinderhulk enchantment. Have fun testing out different champions in the jungle. I would suggest doing so in normal games or AI games first and then move to ranked games. Please, remember that things change and various things are new or different. This doesn’t mean they are bad. Don’t flame others for trying something out that you don’t feel is “good.” Just because a pro or popular streamer doesn’t pick doesn’t mean it isn’t good or viable. Don’t be hating on my jungle Ashe. Take care and best of luck to all of you. Have a wonderful day/night.

TL;DR – Riot is attempting to buff tank junglers and there are a number of welcomed changes for new junglers and jungle veterans alike. Things change and try new things out in normal/AI games before you jump into ranked. Don’t flame new ideas and builds just because a pro or big streamer doesn’t do it. Think outside the box, because there are many viable/good options out there. Take care.

Special thanks to my girlfriend and Nunire for their help and input. I appreciate it!