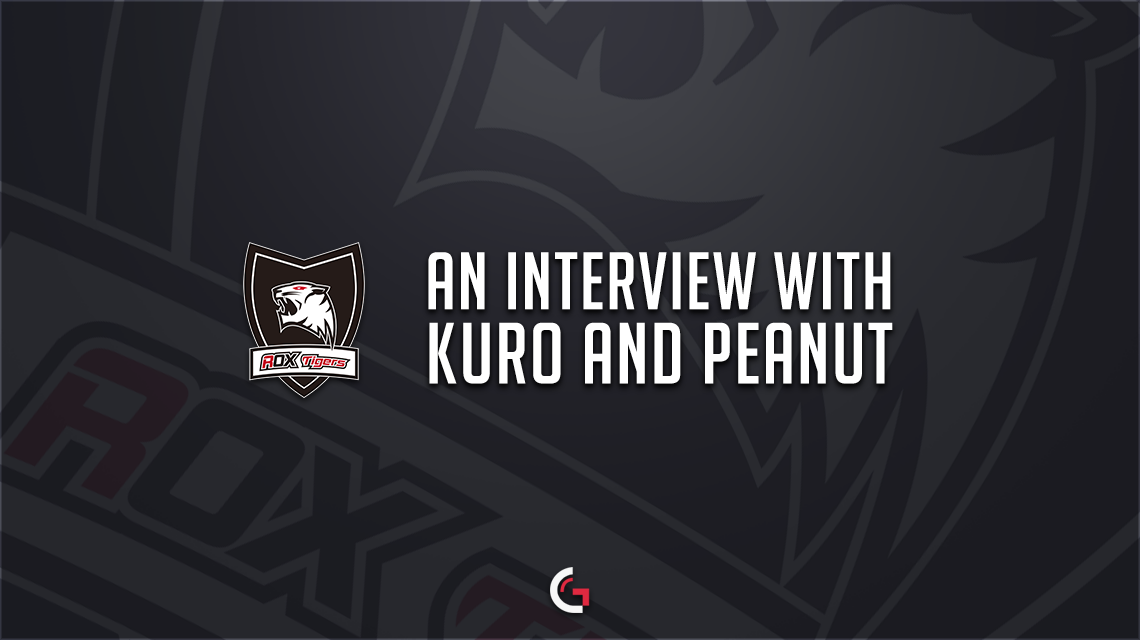 I had the absolute pleasure of sending ROX Tigers players Peanut and KurO, the LCK’s number one seed, some questions to answer as they prepare for Worlds. Here is what they had to say.

What do you feel are the ROX Tigers’ chances going into Worlds 2016 to win the entire competition and what have you done as a player to prepare for the upcoming tournament?

Peanut: This is my first time going to an international competition, so I’m expecting a lot. I’m practicing eagerly.

KurO: This is my second time participating in Worlds now. International matches are really exciting. This is a chance to let LoL gamers worldwide know who we are, so I feel really good. For the upcoming matches, I am working on my physical health, as well as practicing hard.

What does it mean to you going into Worlds 2016 as Korea’s number one seeded team after SKT held that mantle for so long?

Peanut: It just feels good. I don’t think there’s any special meaning to it.

KurO: We’ve always been second in everything, so being the first this time is exciting. We have the pressure of being the first place Korean team, however, on the other hand, we feel confident.

Which team are you most excited to play against in Group A and how do you plan on overcoming them in the group?

Peanut: I’m looking forward to G2. If we play as well as usual, I think we will win.

KurO: Actually, I’m looking forward to facing all the teams because they are not the Korean teams we always play and practice with. They are new teams, teams with different metas, right? We’re looking forward to every team, and we’re in the midst of intense practice so we can win.

Looking at the other Groups B, C and D, who do you expect will be the two teams to follow yourselves (obviously) out of the group stages and into the quarterfinals?

KurO: It’s Samsung and SKT, because they are also representing Korea, I’d like for all of us to pass out of the group stage.

What are your thoughts on Huni’s recent reports that he wants to play in the LCK? Do you feel he would have a shot there or do you feel it would be best for him to remain in NA/EU for the foreseeable future?

KurO: I thought him wanting to join a Korean team is natural because he is Korean. I think that trying new things is always a good thing. I think having diverse experiences is always good.

Peanut, how have you transitioned so nicely from Najin to Rox? Did NoFe’s experience and coaching help you transition to becoming a much more complete jungler?

Peanut: Definitely, it was a big help.

KurO, what are your thoughts on this supposed “Faker Curse” you have to yourself?

KurO: It must be because I always show my losing side when we face SKT. I am doing my best to prepare so that we do not lose next time we meet.

KurO, what did it feel like to work beside Reignover in 2013? Did you feel he would get to the point that he has for both Fnatic in Europe and Immortals in North America and become such a star?

KurO: The time when I played with Yeu-jin (Reignover) was the most fun, but also the most difficult time for me. I think we worked together okay. I thought every one of the players on IMT had the potential to become star players. Because Yeu-jin has the ability and is a player who puts in a lot of effort, I knew he would do well.

A big thank you to ROX Tigers for getting in contact with us to set up this interview. We wish them all the best at Worlds. They were the ones who translated my questions and their answers, so we hope you enjoy.

How well do you think the ROX Tigers will do at Worlds? Let us know by commenting below or tweeting us @GAMURScom.