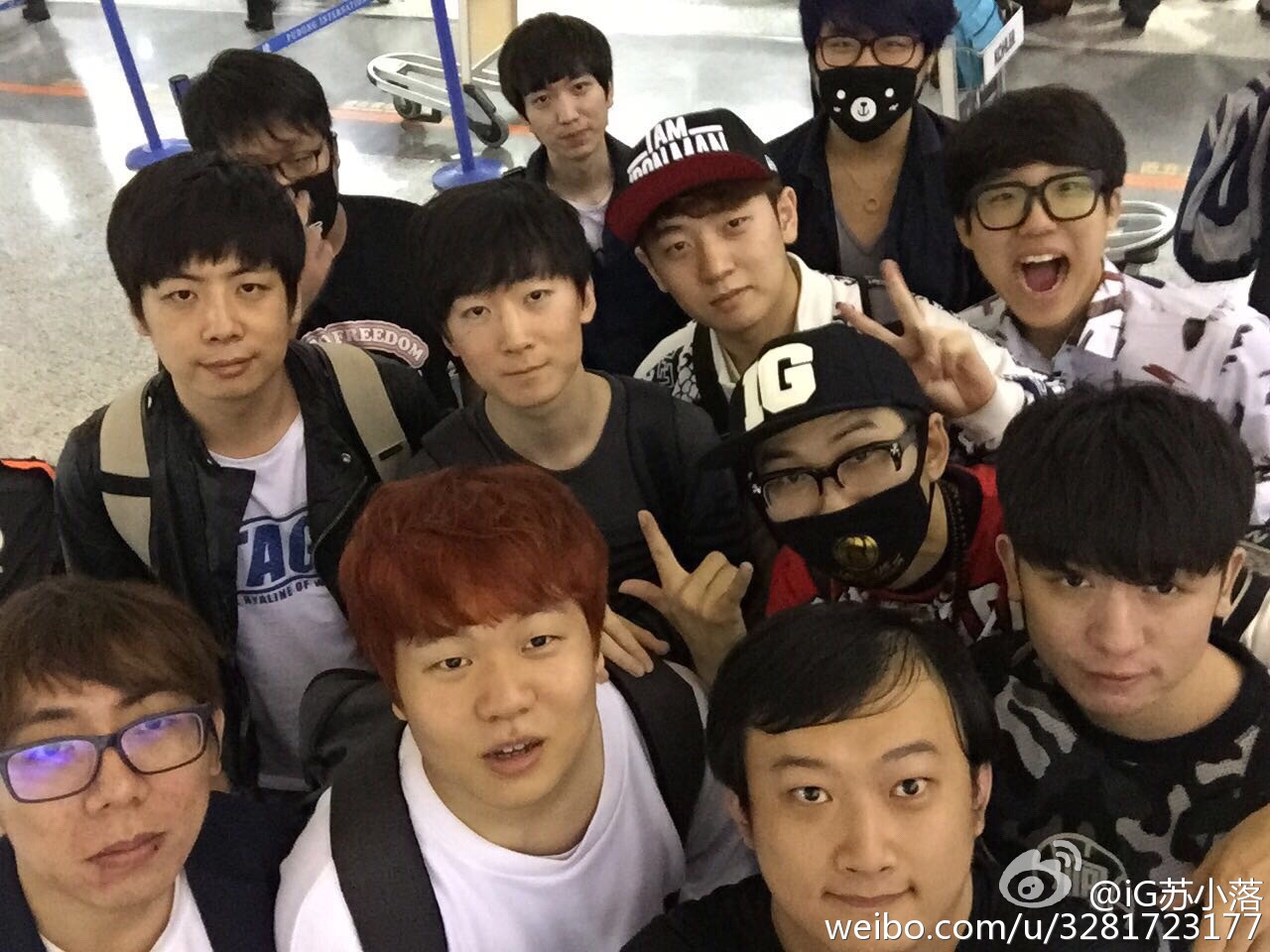 iG has picked up their bags to head towards their dreams, a dream that’s three years in the making.

Under preparations by Riot, the team was able go through a VIP passage, checking in our luggage. Usually, traveling far away either gives one the feeling of reluctance to leave, or satisfaction. Teams like us—as hot blooded as the sun, with such energy and excitement—aren’t easy to find. It’s been too long since we last set foot on an international stage. How big will the venue be?

Strange…no, no. How strong are our opponents? Aiya, maybe we can think about not attending.

“We need persistence to make it to the final stage! Only then can we be the main character!” – Kid.

Everyone made up their mind and decided to take a photograph to save this memory. So that explains this photo below:

The 12 hour flight was too short—short enough so that the group stages and finals were all finished in my dreams. I wiped away the dry saliva stuck to the corner of my mouth. I hurried off the plane and decided to open up both arms to embrace the weather and pretended to yell out a catchphrase.

In an instant, I was hit in the face with Europe’s autumn atmosphere. The air was cold! Thank goodness Riot’s bus was parked in front of us. Let’s go on our way!

After we checked into the hotel, everyone was really excited about heading out. We were informed by Riot about the venue location, and we were told that we would be supplied breakfast.

Then, everyone talked cheerfully amongst each other. Soon enough, we reached the backstage area, where there was catering.

Right now, there isn’t any food, but I fed Rookie a banana!

Since all three Chinese teams arrived around 6am, we were all hungry on the plane. The team’s boss—VK—couldn’t bear the look of hunger on our team’s face. So we headed out to taste some Parisian food!

After finishing, we found a secret path like Teemo, and we discovered the shuttle Riot provided from between the venue and our hotel! Thus begins our exploration!

Blue buff Zz1tai! Let me step up and carry iG!

Returning to the hotel was really convenient, thanks to Riot. In the morning, the training facility was already finished. After discussing things, the team rushed to the venue, and prepared themselves to adapt to this new Parisian venue.

Question: Where exactly is Rookie looking?

Riot came and conducted a small meeting, where we discussed our plans in Paris and the main things we’d have to do here. I started taking notes, but Zz1tai took my pen, and started signing his signature on my notes. In any case, I’ll keep it as a valuable treasure—and I plan to sell it. Here’s the picture:

This is when we found out how dangerous the area we’re living in can be! Riot really emphasized the importance of being safe this time around!

They said: “Don’t head under the overpass. It’s not safe there.”

After finishing our discussion, the host was really friendly, and we managed to reach an agreement. We won’t head out at night. We stayed to take a photograph with him!

Up until now, we’ve been pretty satisfied with Paris. The players have been adapting to practice. Our staff has also been preparing to ensure our team manages to stay one step ahead of the game. This is the third year of our dream—in the dream, there’s us (and you). To be honest, this will be like war. On the competitive stage, there’ll be us—and there’ll be you! We’ll try our best, and we hope everyone can believe in us. iG is here to bring you along for the journey! Even though it’s a dream, why can’t we try our best to reach the top?