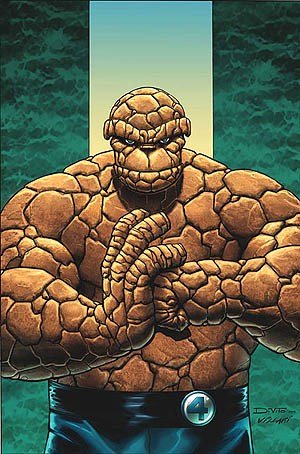 Many pro players get flak every here and there but in all honesty, they are players that many of us look up to, if not aspire to become.

With that said, I thought it would be fun to compare some of our loveable players with some comic book superheroes. I enjoy comics and competitive LoL and I thought that it would be cool to shed some light on both sides. So, I chose 5 from the NALCS to start off this new series, enjoy.

The sort of ties that I make will probably be pretty stupid, so let it be known that this is all just for fun.

Read up more on “The Thing”: Ben Grimm

Though Dyrus started off red hot in his career as a TopLaner, being one of the more dominant ones in his time, the Dyrus that we all know nowadays is the “rock-solid” TopLaner, never really demolishing his opposing player but never really falling behind either.

With this in mind, Dyrus must be the Thing from Fantastic Four. Apart from both players being rock solid, the Thing has shown himself capable of standing toe-to-toe with some of the bigger powerhouses and serves as a strong backbone to his team. Most surprisingly, the Thing has shown to have incredible gaps between his low points and his high points, at lowest he seems to struggle to keep up with other similarly proficient superhumans but at other times, is able to go far beyond what most people expect from him.

In a “20-questions-with” interview with Dyrus, Dyrus confesses as being really good at “taking hits” which coincides well with the Thing who can take blows even from the likes of the Hulk.

Finally, in a more poetic point of view, the Thing, believe it or not, is theoretically immortal. In the same light, we can only hope to see Dyrus, already one of the oldest lasting players, play for years to come.

Hai represents two polar ends of the characteristic of a player, mechanics and strategy. Though he didn’t face much competition in the earlier days of his career, Hai’s mechanics will only be put more and more to the test with new talent coming to the forefront. With that said, Hai is probably the most fundamental piece in one of NA’s most prestigious teams, thanks largely to his world-class shot-calling.

Similarly, Mr. Fantastic is a person that can TECHNICALLY hold his own in a fight but no one really turns to him for his physical abilities. Much like the role of Hai, Reed Richards is the focal point of his team, being the leader and shot-caller.

Back onto the topic of minds, Reed Richards is one of the leading thinkers of the Marvel Universe and similarly, Hai remains one of the most respected shot-callers of this world.

Though CLG is a very old name, it honestly isn’t a team that has fundamentally changed much. Today, much like years before, CLG is a team whose most defining feature is a strong bottom lane. While some of us may not have heard of the legends of the Chauster-Doublelift lane, Rush Hour is honestly a much more refined version.

While James Rhodes does somewhat vary from his cinematic interpretation, the essence still stands, James Rhodes has been and always will be the sidekick of Iron Man. While Tony Stark will be the one in the headlines, taking in most of the credit for their exploits, James Rhodes puts in a similarly equal amount of work, though never really getting the credit that is deserved. With that said, Rhodes has had his share of front-page worthy moments and the relation between him and Tony Stark just screams Doublemoo.

On a different note, I specifically chose the Iron Patriot armor for two reasons. One, it looks awesome, two, AMURICA.

… Both of them being black is a coincidence.

Read up more on Wolverine: Logan

Though Dyrus is a veteran, Saintvicious takes the cake of being the poster boy of veteran players. Saintvicious has been through quite a lot, having been at the top in his prime but hitting rock bottom. It’s almost European-Legendary-MidLaners-Sad-Story-Worthy really, the same man who was the fan-voted NA Allstar Jungler would fine himself being best remembered as a meme. However, through all this crap, old man Saint has shown himself to be near immortal, finally coming back into the LCS and NOT BEING LAST PLACE.

Wildturtle is a very talented players as evidenced by the multiple accounts that he holds currently residing in the top 10 NA solo-queue rankings. He’s one of the two main carries of TSM and does a more-than-decent job at it. However, critics of Wildturtle usually say, for good reason, that WT is closer to his wild side than to his turtle side. It isn’t quite rare to find Wildturtle flashing into an enemy base in order to try to make a play. When that works, people will praise him for his “balls” but if it doesn’t… then, damn, too ballsy.

In a similar way, Johnny Storm is the most hotheaded one of his team, however no one can rely deny how powerful he really is. Specifically when it comes to combat, HT is probably the most powerful one of his team. At the same time, he has 2 teammates that usually try to tone him down in the form of his sister Invisible Woman and the aforementioned Mr.Fantastic. If I had to push the envelope a little further, I’d say that Invisible Woman’s restraint on Johnny Storm does somewhat seem reminescent to Lustboy, a player that has always played with overly-aggressive ADCarries. Either way, while there is a massive upside to both WT and HT, they do have some kinks to work out in their systems.

I really love comic books though some might say that I only looked at Marvel’s superheroes, but really it’s only because these players resonated more with those characters that I attached them.

You might see that I’ve brought up 3/4 of the Fantastic Four… but that’s because I feel that they do fit those respective pro players.

Obviously, I hope this is only taken for fun! Hope you enjoyed.