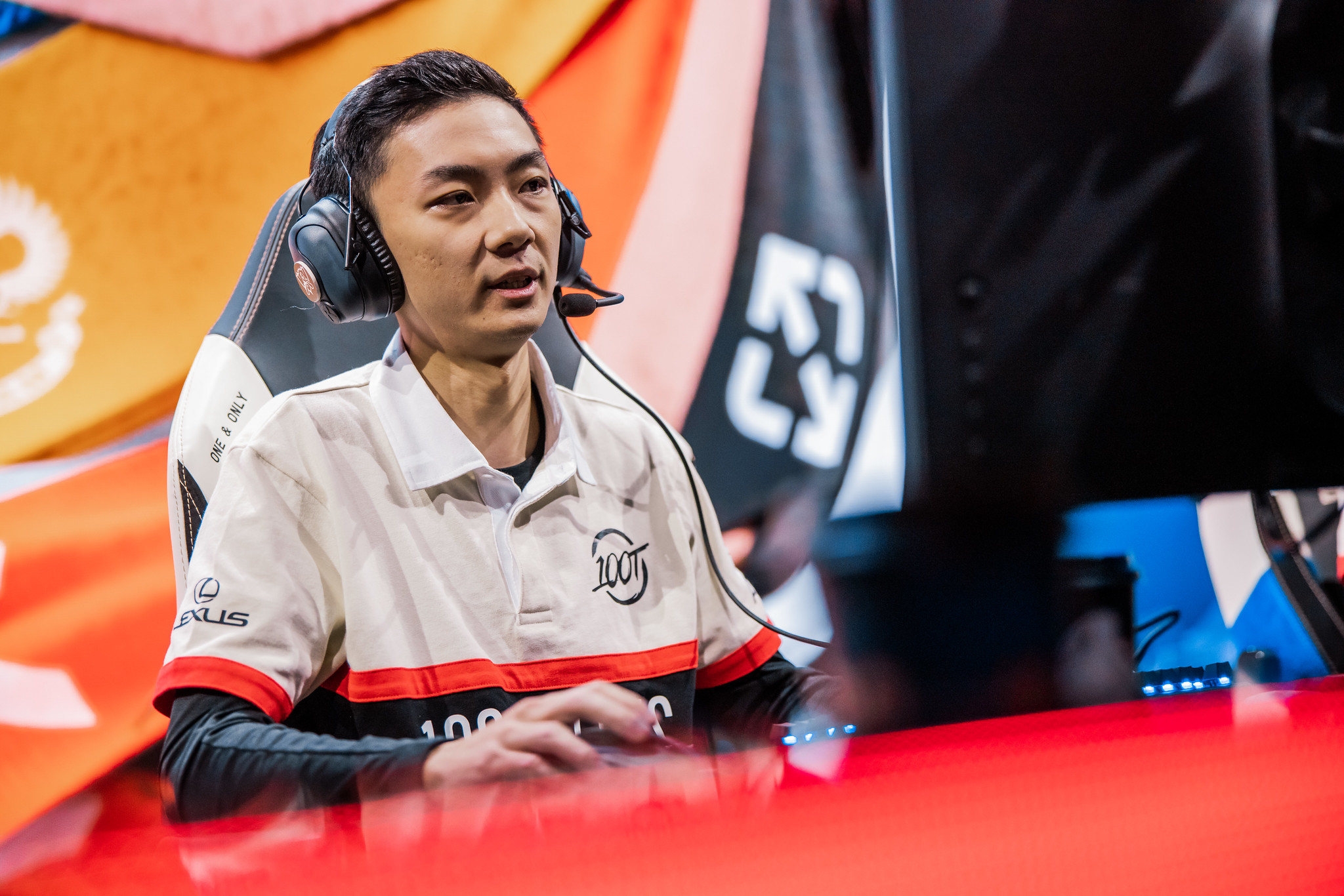 After Cloud9 and Evil Geniuses were eliminated from the 2022 League of Legends World Championship earlier this week, 100 Thieves will have to take up the mantle of “North America’s last hope,” a moniker that gets bounced around between LCS teams each season, and falls onto the shoulders of 100T in just their third appearance at the tournament all-time.

The only caveat in regard to 100T’s chances of going deep at Worlds is that the team has placed itself into an 0-3 hole after failing to win a single game in the first week of the group stage. To advance to the quarterfinal round, 100T will need to win all three of their remaining group stage games, plus get a little help from the other teams in their group along the way. Even if they go undefeated to close out their run, there’s still a chance that 100T get eliminated from the tournament without the chance to play a tiebreaker game.

Following the team’s winless performance in week one, 100T AD carry Victor “FBI” Huang spoke to Dot Esports about his team’s preparation for the second week of the group stage, and why 100T failed to find any success against the other three members of Group D: Gen.G, Royal Never Give Up, and CTBC Flying Oyster.

“I think the main thing is, on a team level, the eastern teams are much more coordinated and they have a very good understanding of how to play the game throughout the mid and late game,” FBI told Dot Esports. “For our personal record, the first two games came down to my own performance. I think I performed, quite frankly, terribly, and that really kinda sucks.”

For FBI, the World Championship has been a particular point of struggle. He’s yet to have a gold lead at the 15-minute mark in 100 Thieves’ three games, and his 1.4 KDA is the second-lowest among all AD carries at the group stage, according to League stats site Games of Legends.

On average, FBI has faced a CS deficit of 23 across his team’s three losses, marking the apex of his early-game struggles thus far at Worlds. At last year’s tournament, he had positive marks in average gold, CS, and XP differentials at 15 minutes, while not having an above-board number in any of those categories this season.

“This year, on an individual level, I’ve performed much worse compared to last year,” FBI said. “I’m a bit sorry to my teammates because they’ve been playing really well. Hopefully in the next week we can bring back that 3-3 record that we had last year, and I’m really looking to work on my own performance.”

Related: One thing each North American League team needs to do better in the second week of Worlds 2022 groups

100 Thieves is attending its second straight World Championship with the exact same starting lineup. Last year, the team went 1-2 in the first week of the group stage.

Eventually, the team scraped together a .500 record in group play last year, but it wasn’t enough to climb past an ultimately top-heavy group that included two top-four finishers in T1 and Edward Gaming, the latter of which went on to win the 2021 tournament altogether.

What’s perhaps most interesting about 100T’s three games at this year’s Worlds has been the minute marker that they’ve seen their chances at winning dwindle. In all three of their contests, 100 Thieves were within 3,000 gold of their opponents at the 23-minute mark, but were outplayed in late-game teamfights in each of them.

Despite keeping things close against all three of their opponents in week one, 100 Thieves saw the opposing team’s gold lead balloon and their own Nexus fall within mere minutes of having a chance at actually winning.

“What matters in the late-game is decisiveness,” FBI said. “In terms of teamfighting, being apprehensive in a teamfight or mispositioning [for] a single second can really cost you a fight, and I feel like North American teams tend to make more mistakes when it comes to crucial teamfighting. That’s the main thing we can improve on. We’ve been really focused on working on our teamfighting.”

Beyond a skill gap in teamfights, FBI also complimented eastern teams like Gen.G and RNG on their ability to transition their leads in individual lanes across Summoner’s Rift and “snowball in a way where they choke you out of being able to make any plays.”

That subtle suffocation by their eastern opponents has been a key factor in why 100T can’t seem to pull the trigger in the late-game. In those teamfights that are costing them victories, it’s seemingly always their opponents who are engaging, and eventually, winning those fights.

But even past their late-game micro-play, 100T (and FBI himself) have some early-game issues to improve upon. The team ranks 10th among all group stage teams in [email protected], while sitting dead last in Mid/Late Rating, according to League stats site Oracle’s Elixir.

100 Thieves will have a chance to rebound and take a stab at NA’s third shot at a perfect “miracle run” in the second round robin when Group D plays all of its remaining games on Sunday, Oct. 16.