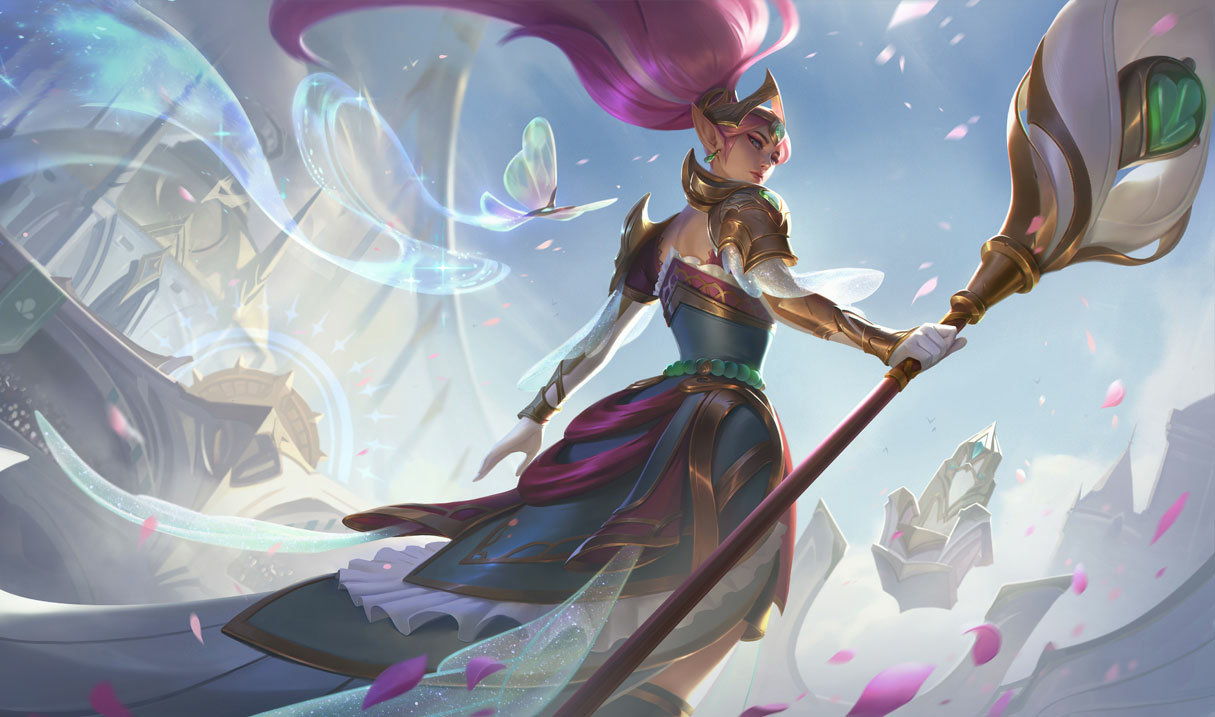 Void champions usually cause chaos where they go, and though Janna in the top lane isn’t a Void champion, she’s still been wreaking her share of havoc in the competitive League of Legends meta. She is soaring through the competitive queue with a win rate of over 60 percent.

Janna, The Storm’s Fury, has been steadily rising in popularity as a top laner with her Moonstone build, but she has an unconventional playstyle. Unlike most players, some pick her in the top lane to support the team and scale to the late game to win ranked matches.

In Patch 12.2, Riot made some changes to her overall kit, which buffed her base movement speed drastically, and there were numerous adjustments to shift her stance from aggressive support to an enchanter. However, the Enchantress is making a move that fans didn’t anticipate at all. Janna top pick used to be a relic of the past, but in this meta, she’s looking like a potent pick to counter tank champions with poor waveclear in the top lane by being an ever-roaming support pick.

In terms of Summoner Spells, players tend to go for Flash and Smite. Flash helps avoid any enemies’ engages, and it is also a handy tool to close distances with allies and shield them in challenging situations. Smite applies to this pick because she can roam freely with the ally jungler. She can help in clearing jungle camps faster and, at the right opportunity, even steal objectives like dragons and Baron from under the nose of the enemy junglers.

Janna players usually take runes under the Inspiration Tree. The champion can go with Glacial Augment for the slow, Perfect Timing to have a stopwatch as a jail-free card in a messy teamfight, Future’s Market to finish items early, and Cosmic Insight for the CDR on her abilities. Domination is a common pick in the second tree, with Taste of Blood for a bit of lifesteal and Relentless Hunter for the extra movement speed to travel the map quickly and efficiently.

There are various ways to start the match as Janna while playing on the top side. She can comfortably farm against the laner until she reaches level three and starts roaming the map. The champion can assist her jungler in starting their camps and stall/track the enemy junglers while supporting the teammates with frequent ganks. Picking Spellthief’s Edge lets her poke enemies with Howling Gale to earn gold easily.

If the enemy top laner is playing a tank champion like Ornn or Gragas, they can’t push waves faster to punish Janna’s absence in the lane. Even if they can take down objectives like towers, it wouldn’t pose a problem due to the recent addition of the Objective Bounty system. If the game’s in a tough spot, the team gets an objective bounty to replenish their gap. Even better for the allied team: they’re already ahead if they keep getting kills. It’s a win-win situation for the team with Janna. She shouldn’t be blind-picked or flexed, but it should come late to counter weak top-side champions during the champion selection.

Moving to the mid-game, Janna’s role is basically to be a wrench in the enemy’s plans and boost the kill potential of the mid and bot laners while assisting the ally jungler. Her passive, Tailwind, allows her to gain movement speed to quickly rotate and even kite enemy players trying to kill her. Allies also gain movement speed while moving towards Janna, which gives them a great advantage to reposition in teamfights. However, Janna shouldn’t take a share of experience points from the ally laners because it delays their power spike. Janna players should only go near a wave to gank.

While Janna keeps making enemies take teamfights when outnumbered, the team’s jungler gets a considerable boost to power farm and becomes a carry in the late game. Junglers like Kayn and Jax benefit significantly from this since they can steal camps while having protective support by their side to assist in skirmishes and ganks. Due to Janna’s early-game support item, she gains access towards vision wards, which can be placed in the enemy jungler or river to have a constant vision of the enemy team’s movements. Allies could use this information to make better in-game decisions or catch enemies while rotating to further enhance their lead in the mid-game.

The enemy players need to respect the constant Janna roams and play it safe, which gives a priority in both mid and bottom lane to create another power condition for the ally team to win the match and secure the significant objectives. The enemy top laner moving to teamfight and mitigate the numerical disadvantage serves little purpose either, because Janna brings a ton to a teamfight with her slows, shields, and even healing with her Ultimate ability. After this, the match becomes rather one-sided when the enemy cannot contest the team anymore. The late-game for the scaling champions has been reached, and they can win teamfights and finish the game efficiently while the enemy champions cannot get to that level in time.

Though players think Smite Janna can be oppressive and quite annoying, Riot Games hasn’t talked about this pick yet. However, players should expect to see her nerfed soon to send her back to her prime support role in the bottom lane.