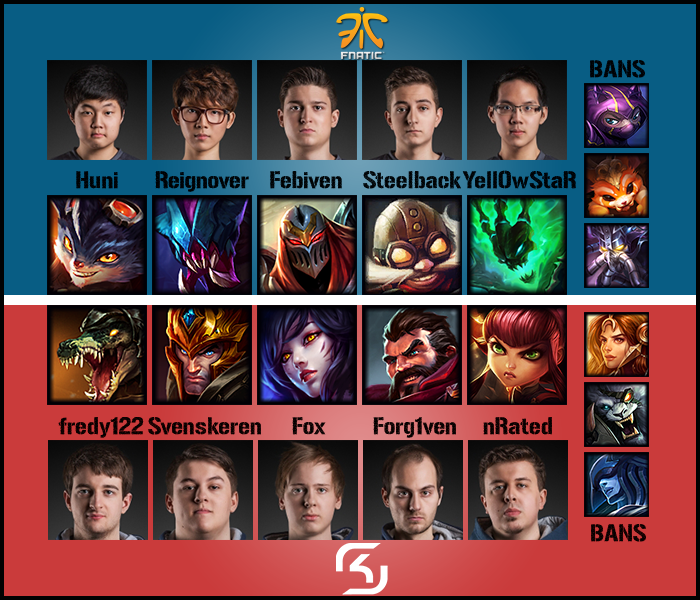 I’m writing this article a day after Fnatic have defeated SK Gaming in the first El Clásico of the season. Prior to this article I wrote this one about this classic European match, in which I said the Fnatic were the clear underdogs, and I held a strong belief that SK Gaming will emerge victorious. Not only were SK undefeated at this point, but they had two games as examples on how to defeat Fnatic, one of them being very recent: the Copenhagen Wolves vs. Fnatic from week 4.

The picks and bans

In the pick/ban phase, Fnatic focused two of their bans on freddy122, by banning Kennen and Gnar. They left Azir open, probably because the game was taking place on the 5.3 patch that had reduced some of the champion’s power. They lastly banned Kassadin, mainly because he is still a strong all around pick.

On the other side, SK banned Lissandra, one of strongest flex-picks of the moment, Rengar – probably Reignover’s most powerfull champion – and Leona. This last ban is very interesting – not only is it one of YellOwStaR’s strong champions, but it’s also a good counter to Annie, which they most probably decided to first pick for nRated.

The ban phase left Zed open, and since it is one of Febiven’s most comfortable picks, and a strong champion nonetheless, Fnatic did not hesitate to pick him. SK responded by securing both of the bottom lane champions: Annie for nRated and Graves for FORG1VENGRE. This was a clear statement that they were looking for a strong engage team composition.

Next, Fnatic chose their jungler, Rek’Sai – preferring the global presence and map control to the hard engage that Jarvan IV could have provided for example – , and ad carry, Corki – a safer choice against what SK were preparing. SK continued picking engage and playmaking champions by choosing Ahri for Fox, a champion he already demonstrated to master, and Jarvan IV for Svenskeren. Fnatic’s last two picks were Rumble, already one of Huni’s signature champions, and Tresh. This was the season’s first Tresh pick for YellOwStaR, and probably the best pick they could have made – since YellOwStaR is the type of player that likes making plays. Fnatic could have gone for Janna or Morgana, but I think both champions had some drawbacks: Janna is a good disengager, but not a playmaking champion, a quality YellOwStaR prefers, and Morgana does not offer the same type of disengage and tankiness that Tresh has. The last pick belonged to SK, and they chose to get Renekton for freddy122, a champion he is very comfortable with.

Having a weaker bottom lane, Fnatic looked for a lane swap, but the lack of deep early wards allowed SK to counter it by sending their duo to the top lane. The situation looked bleak for Fnatic, but they did not lose heart, putting their hopes on Reignover’s map play. After taking his red and blue buffs, Reignover started to visit all lanes, managing to burn a flash from Fox in the mid lane and secure first blood from freddy122 in the bottom lane – 10 minutes into the game he was involved in all the four kills his team had. The great early game from him also neutralized Svenskeren’s presence on the map, taking away on of SK’s most important engage mechanism.

In this game Fnatic managed what no other team did until now: punish SK’s lack of vision. This is all the more highlighted by a very early Sightstone on the part of Reignover, which allowed him to set up very deep vision in SK’s jungle – combined with a great tunnel network, it allowed Fnatic to take over the map. The deep wards also permitted Huni to make great teleport plays that won team fights and secured kills that built their gold lead.

Slowly, Fnatic pushed all the objectives on the map; they built for themselves a tower lead and got the dragon control, an objective that no other team managed to contest when facing SK. The dragon control was of paramount importance to the Fnatic strategy – having already secured four dragons they knew that SK had to fight for the fifth, and thus prepared the scene for the game’s last team fight, one that Fnatic won.

It must be pointed out that while Fnatic had a great game, one that they most probably prepared in detail, some of SK’s members had a lot of misplays – most notably Svenskeren and freddy122. SK has a lot to learn from this game and if they manage to do that they will most likely become an unstoppable force.