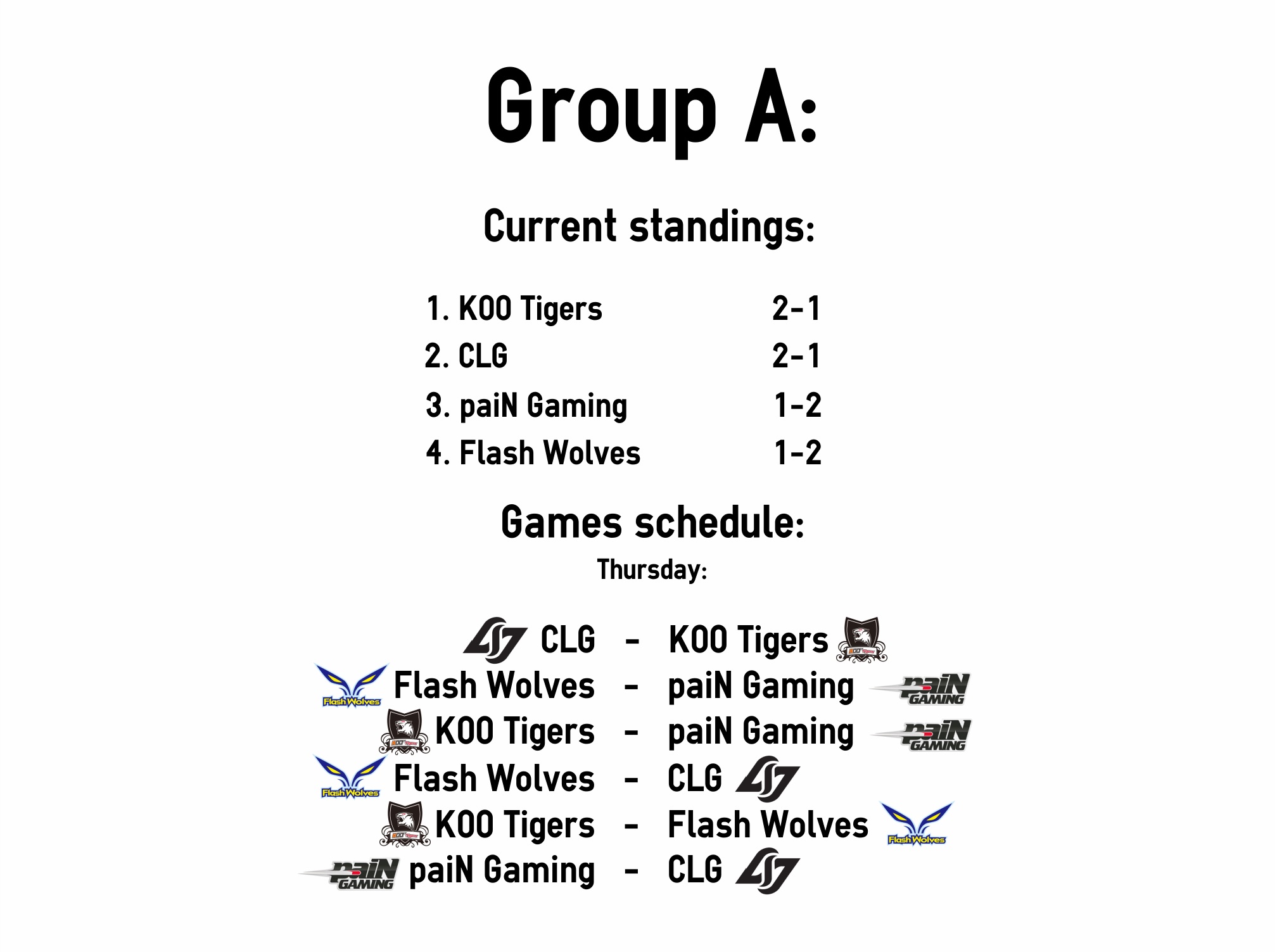 With so many upsets happening during this years Worlds no team can be counted out after one week of play. I believe that seeing what happened throughout the exciting four days nobody is brave enough to call a winner of any game. This way each day this week will bring us a lot of emotions, as every day one group will play six games to determine the two teams who will proceed to quarter finals. I decided to analyze group A, as they will be playing on Thursday, but if you like my way of presenting things leave a comment or an upvote to show me that you would like the other groups analyzed too. If you are interested in only specific aspect of the group or only on one team i prepared a small table of contents so that you can get where you want easier:

As we can see all the teams are very close and remembering that Flash Wolves defeated KOO Tigers and then lost to paiN, we can safely say that anything can happen. I will not risk to call anybody a clear favorite as we already saw how this ended for other people.  Obviously the 2:1 teams are in a better spot, but with all the head-to-head match ups its not always that great.

I have put teams in the order in which they are in the standings, so we will start with KOO Tigers.

KOO Tigers having won the first game against CLG have put themselves in an advantageous position. It is enough for them to beat CLG, not get upset by paiN and then hope CLG goes 2:1 to take first place. Their only problem is the 0:1 record versus Flash Wolves which, in case they lose again to the Taiwanese team will force them to cheer for CLG and hope for the best. Obviously if they go 3:0 there is no way anyone stops them and if they go 0:3 there is no way they are getting out. The interesting part is that winning two games guarantees them a spot in at least a tiebreaker for second and going 1:2 means not getting out of group only in paiN has a miracle run or Flash Wolves and CLG show up very strong.

Due to the fact that CLG only lost to the clear favorite the only way they are not going to London is if they go 1:2 losing to KOO and either paiN or FW pull out a miracle run. This is due to the fact that if both of them drop at least a game they will be tied with CLG and will either have a losing head-to-head with the North American champions or will be tied. For CLG the first game against the Koreans will be crucial, as winning it will bring the head-to-head to 1:1 and ensure they at least force a tiebreaker if they have equal records at the end of the day. Please note that in this graphic each point suggests one way in which something can happen, not that all the events need to take place to make CLG get first for example.

Both paiN Gaming and the Flash Wolves apart from winning everything have to also hope for positive results in other games to get first place. Going 3:0 however guarantees them a trip to London. The problem is that, no matter how unexpected the results have been thus far, it is very hard to imagine any of them going 3:0. No worries dear Brazilians, going 2:1 can also make you advance as the first Wildcard team, you will need some help from other though. If somehow both CLG and KOO crush and burn paiN is in the best position as they currently hold the head-to-head against the Flash Wolves. Unfortunately there is no way in which they go to quarters without winning two games. Moreover, they can even go 2:1 and still get eliminated in the Group Stage.

As you might already expect the Flash Wolves have a similar situation to paiN. There is just one thing that makes it a little bit better. If they somehow get tied with KOO they will at least force a tiebreaker. It only gets better for the Taiwanese team, if they manage to defeat KOO again they will hold the head-to-head and if they manage to win the rest of the games will surely surpass the Koreans. Unfortunately being 1-2 after the first week only a 3:0 run guarantees going to London, which will also make any Flash Wolves fan follow the other games, hoping for the best possible results.

My favorite part of any competition, the tiebreakers. The best information is that after two games the dream of a 4-way tie will be surely alive. There are multiple scenarios in which we are getting some fun small tournament, which will decide about the group, where one bo1 and a good drawing can make paiN go to London. (Just a small reminder: in case a 4-way tie occurs all the teams are randomly drawn into two pairs and the games between them are like a small semifinal, the winners are the two teams who advance to quarter finals and a game between them decides the seeding.) Keep your hopes up guys, there is a huge chance for even more Worlds action than we were expecting!

If anyone believes that the number of champions we saw on the Rift for the first four days was not big enough, there is some hope for even more crazy picks! Just wait for one of these scenarios to occur. This is not that impossible, as it will only take CLG to have good games and paiN to not upset anybody, or only the Wolves again. If you loved the Mineski-Fnatic match from Season 3 Worlds this is what you are cheering for!

If you liked my article and it helped you understand the situation in Group A feel free to leave a comment or let me know if you want to see the same done for other groups. If you did not like it please also leave a comment as any criticism will help me improve and bring you clear information during the future events!