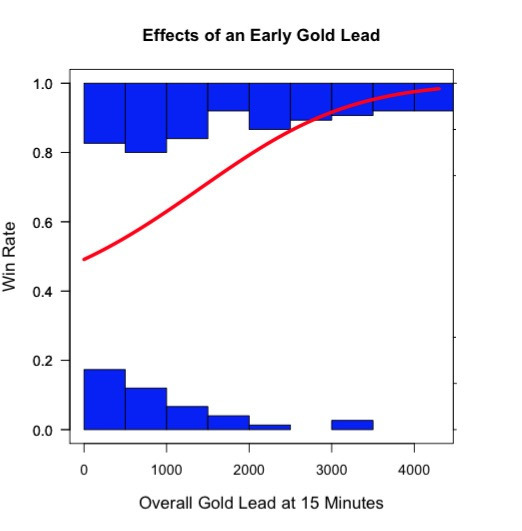 Note: An “early game lead” in this article means a team’s gold advantage at 15 minutes. While the “early game” can last as little as 5 or as long as 25 minutes, a game’s first 15 minutes is a pretty good approximation, and using the same timeframe makes comparing games much easier.

Also, sorry for the blurry images, they won’t upload to the site properly.

They’re stories as old as time (or at least 2010): the mid laner snowballing a small early game lead into a win, an early dragon creating pressure that lasts the whole game, a downed tower causing the collapse of an otherwise solid team. The early game is a crucial part of professional play, so a question on everyone’s mind is: “How can a team get an advantage in the 15 minutes?”

To answer this question, I looked at 123 games from the professional scene in the last month. (first 3 weeks of LCK, 3 weeks of EU LCS, 3 weeks of NA LCS, first 2 weeks of LMS, couldn’t find LPL) This is a pretty small sample size, but I wanted to look at how current League is being played since the start of the summer split.

First off, let’s look at how teams with an early gold lead do for the rest of the game:

The next graph shows actual gold lead versus win rate. The red line shows an approximation of win rate at an increasing gold lead, while the blue bars represent how many teams had a certain gold lead (winners on top, losers on the bottom, 5000+ blowouts removed). For example, the bar in the top left corner signifies how many teams won with a 0-500 gold lead, while the bar at the bottom left shows how many lost with the same lead. (A Win Rate of 1 means a win percentage of 100%)

It’s pretty obvious that early game gold advantages help lead to victories, so I thought it would be more interesting to break each early game down by lane. Below I’ve shown how well teams have translated a lane win into a game win, counting both the AD carry and support in “Bottom Lane”. I counted a team’s lane as “winning the early game” if it had more gold than its opponent’s matching lane at 15 minutes. (I didn’t count a lead of less than 50 gold either way)

Here are the gold-lead-vs-win-rate graphs:

We can’t draw anything conclusive from this information, but it looks like getting the jungle rolling is a good sign for victory. Bottom lane’s dominance isn’t surprising considering it has two people rather than one, and top lane looks like a “go big or go home” environment.

The problem with looking at each lane individually is that we miss how each player’s actions affect everyone else’s: classic examples include a 3-0 LeBlanc feasting on an overextended bottom lane, or an Evelynn putting enormous pressure on otherwise ordinary lanes. So, below is a table for the win rates of certain lane combinations winning. For example, “Top/Mid” means that both top and mid won their lanes early, and, remember, I didn’t count ties. (A game where a team wins all four lanes would be placed in all six categories, so don’t think of this as just “Top/Mid” winning.)

The high jungle combo win rates make sense. A jungler and a laner winning probably means that the jungler made a successful gank, which opens up other options for winning.

Looks like a top laner can just go along for the ride if his teammates are stomping.

Just for fun, let’s see what happens when all four lanes win:

Please welcome TSM to the “Completely Inexplicable Losses” club after their poor result against Dignitas. Also, breaking news: Winning all 4 lanes is a good sign for success!

There is some evidence that the jungler is the most influential member early game, but this type of simple analysis isn’t really enough to say anything conclusive. The early game is complicated, with each lane interacting with each other, dragons being taken, and towers being traded. Trying to understand all of these interactions probably require a more complex investigation strategy than using simple percentages. Here are some questions I’d like to answer for Part 2:

-How much is an early dragon worth?

-How much is a tower worth?

-Is it better to get a gold advantage off of champion kills, towers, or farming?

Note for stats nerds: I added a (gold lead)2 term to the logistic regressions, so that I didn’t get things like “A team with a 100 gold lead has a 35% chance of winning”.