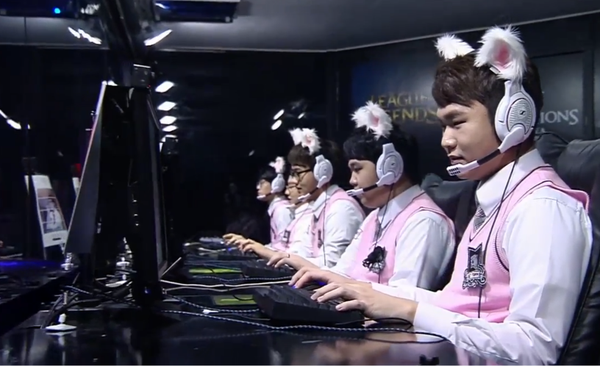 In two weeks, the North American team Cloud 9 will face off against the top team in Korea, the GE Tigers. While none of the players on the GE Tigers were considered to be top players in their positions in Season 4 (with the exception of Gorilla at the very end of the season), as a cohesive unit in Season 5 they have become a powerhouse. The Tigers have only lost two matches so far in the entire split, one being to Jin Air in the super late game and one to Faker’s LeBlanc, which he has never lost a game one. Despite the two game losses, the GE Tigers have not dropped a set of games so far in the regular season due to their incredible ability to adapt quickly, their gigantic champion pools, and the versatility of all five players. Facing them is surely daunting for anyone, especially for a team who has struggled as much as Cloud 9 this season.

Although they are looking better each week, the size of effective champions in Cloud 9’s pool so far appears to be relatively low. The term effective champions means the number of champions that Cloud 9 have proven that they can play well, regardless of the outcome of the match in which the champion was played. This makes drafting against a team as versatile as the GE Tigers a difficult task, which is what drew me to it. Today we’re going to look at what I believe to be the best possible draft strategy for Cloud 9. For the purposes of this article, I will only be talking about the best of 1 match in the group stage, because there is no guarantee that they will ever play each other again in this tournament.

What Are the Tigers’ Strengths in Champ Select?

They play everything. The scariest thing about the Tigers is that all five members of the team can hard carry depending on the composition and what is needed of them. Because they have no obvious weaknesses, I want to talk about what their greatest strengths are. Their most famous composition is colloquially known as the “Juggermaw” comp, which involves using a Kog’Maw with a group of champions that can provide shields and speed. This allows the Kog’Maw to essentially act as the front-line and the primary dps for the team. Generally teams will ban Lulu to prevent the composition from working, due to Lulu being necessary for the Juggermaw to work and her versatility outside of the composition. Beyond that, they play almost every meta champion at an extremely high level. That being said, in their second set against Samsung Galaxy in week 8 of the LCK showed the jungler Lee’s weakness on Rengar. He missed a large number of Bolas, and he couldn’t seem to get a good ult off due to poor vision control. It should also be mentioned that going into IEM GE’s mid laner Kuro has been exclusively playing Viktor mid since week 7 of the LCK. This pick has proven to be incredibly powerful in the new team-fight meta and it seems to be remarkably good at sieging, as he often takes down the enemy mid laner’s turret during the laning phase. Beyond that, PraY plays every AD Carry in the meta (along with Lucian and Kog’Maw) but his Corki is currently 9-0 and a gigantic threat. It should also be noted that beyond the problem with Lee’s Rengar, they have shown no other consistent weakness.

So How Can Cloud 9 Deal With The Tigers in Champ Select?

So first things first, you ban Lulu. I don’t care if you’re Cloud 9 or if you’re SK Telecom, you ban Lulu against the GE Tigers. The Juggermaw comp works so well because of the Lulu and because of how perfect PraY’s positioning is. You do not play games against that comp if you intend to win. This is where things get more difficult because of the mystery behind champion pools. Hai, for example, has only effectively played Zed and Kassadin so far this split. On 5.4, Kassadin has been severely nerfed and probably will not be played. Based on solo queue history it looks like Hai has been playing Lissandra and LeBlanc as well, but whether those champions are ready for competitive play is questionable. Beyond that, if I were GE I would focus on shutting down Hai in the ban phase so I would probably remove popular mid champions along with Zed in order to maximize the chances of something like Viktor working. That being said, Hai should be practicing Viktor right now so that he can attempt to pick it away from Kuro early in the draft if he can. If I were C9 I wouldn’t bother throwing any bans bot or top, because of the versatility of the champion pools. Some may think to ban out Smeb’s Rumble, but Balls plays enough Rumble that he should understand any match-up well enough to at least go even in lane. For that reason, I think the two bans beyond the Lulu should go to Lee Sin and Jarvan. While I don’t think GE will throw many bans in the jungle, if you can get the Rek’sai before they can you put Lee in an awkward position where he has to play Rengar, or something like Pantheon that has fallen out of favor and he hasn’t played for weeks. I have no clue if Lee plays Nidalee, but it doesn’t seem like the type of champion he would go for as he and Smeb are generally the engage for the team. To review, I think Cloud 9 should ban Lulu, Jarvan IV and Lee Sin.

In my opinion, you have to play a team-fight comp against the Tigers due to the Tigers’ strong emphasis on neutral objectives. For that reason, Balls should play Maokai, Rumble or Hecarim. Though he hasn’t played Hecarim in competitive play, he came into his first game of week 6 of the NALCS with Teleport & Ignite as his summoner spells, which leads me to believe he has been practicing it. Personally, I would argue that the best choice is Rumble due to the familiarity Cloud 9  has with the champion and how to play around the equalizer to maximize their chances in team fights. If Rumble is already picked or banned, I’d go with Hecarim due to the team-fight and split push pressure that he provides for the team. We already talked about the jungle a little bit, but if for some reason Meteos cannot get Rek’sai, Nidalee should be fine. I worry about the tankiness of the comp if you pick Rumble and Nidalee, but if you’re picking your jungler early you can prevent that issue from arising. For mid, if for whatever reason Hai can’t pick Viktor or Zed, we can only hope that he’s been practicing other meta picks. I’ve always thought that Cloud 9 is at it’s best when Hai can split push and control the rest of the team while doing so, which is why Zed has always been such a good champion for them. That being said, I think Hai would excel on champions like Xerath or LeBlanc that would allow him to stay out of the team-fight and control the fight from a range or flank. Sneaky should absolutely play Kallista if it isn’t banned. His Kallista is excellent, it can help the team make up for the skill gap in terms of neutral objective control along with providing a strong teamfight AD Carry. If Kallista can’t be picked due to being picked away (incredibly unlikely) or banned, try to take Corki away from PraY, as both players have performed really well on the champion. LemonNation should probably be given the last pick, as his job will be to round off the composition, with either stronger engage and cc protection from Morgana or disengage from Janna. Personally with Cloud 9 specifically I would prefer the Morgana due to Lemon’s history on the champion, but if the disengage then they should take the Janna. Using the champions we talked about, let’s talk about a few comps that Cloud 9 could use effectively.

In my opinion, this is the best composition that Cloud 9 could hope for. Obviously, the heavy AD is a problem, but the Corki can fix this through a rarely used build path in which the Corki buys a Haunting Guise in order to maximize the magic damage caused by his spells. In perfect use, this composition allows for heavy 1-3-1 split pushing along with extremely high mobility and a strong teamfight. In teamfights, Cloud 9 should let Corki poke until Hecarim can engage. Once Hecarim ults into the fight, Rek’sai’s job is to get to PraY or Kuro and keep them cc’d so that Hai can get an easy assassination on them with the deathmark. If for whatever reason Hai takes a lot of damage during his assassination, Lemon should be close enough that Hai can shadow back into a Janna ult. During this, Sneaky, Balls and Lemon should be attempting to break down the frontline with Hecarim’s combo and Corki’s mixed damage. Without knowing the opponent’s picks, it’s hard to say whether or not to lane swap, but unless the lanes are in a dire situation I would advise against it because GE will beat you in a lane swap. Due to the double Trinity Force their power spikes should happen around the same time, so this team is probably the strongest during the mid game. This comp can win through smart split pushing, which requires Lemon and Meteos to be able to control the vision better than Lee and GorillA.

So the biggest flaw with this comp is that the entire team is based around teamfighting except for the Nidalee, but I think in this situation it works. So this is a game where I think you give up the first dragon or so if it involves a fight unless the first dragon happens after Viktor can get his fully upgraded Hexcore and Maokai has a full Rod of Ages. At that point in a teamfight, in perfect use Cloud 9  waits for GE to position themselves outside the pit, then Cloud 9 should try a 1-4 flank with Maokai on top side and the rest of the team on bot side. The timing is absolutely crucial here, but the goal is for Maokai to lock down a carry, then Kallista ults Morgana into the middle of their team onto a Viktor W. When Morgana gets to the middle of the team, she throws out a Q towards a target then ults. During this, Kallista should be getting as many rend stacks out as possible and Nidalee should be attempting to land enough spears that jumping into the fight in cougar form would be a safe endeavor. This team doesn’t have great siege, so they are more reliant on fighting around objectives and transitioning that into turrets, so Cloud 9  would need to be creative and force GE into fights about Blue and Red buff as well as Dragon and Baron.

Cloud 9 are the heavy underdogs going into their match against the Tigers in the upcoming weeks. While I personally think that the Tigers can win the whole tournament without dropping a game at their best, it’s interesting to think about the imperfect science of how to prepare picks for these David vs Goliath match-ups. Cloud 9 will need to play something new in a perfect use scenario in order to take down the Tigers, but I don’t think it is impossible. If you want my opinion on the chances, I’d say 95-5 in favor of the Tigers, but how can we know until we see the games? Only time will tell, so tune into IEM Katowice on March 12-15th.