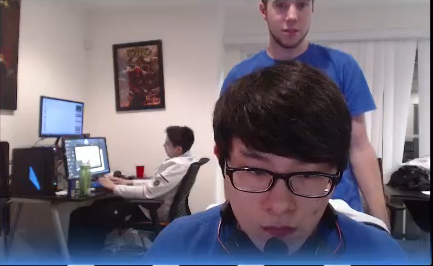 There’s a lot of drama around Team Liquid these days. With Piglet getting benched this past Sunday and all the allegations against him it brought about, there’s been no shortage of speculation about what’s going on inside the Team Liquid house. With no solid evidence of what actually happened however, the general populous of Reddit latched onto the one solid thing they could find: a video of Jokasteve – the team’s general manager – pressing buttons on Piglet’s keyboard while he was in a game. Piglet looked annoyed by the incident, and people lost their shit over it.

Multiple threads were made about the VoD; with one receiving over 350 upvotes and nearly 400 comments. People flocked to insult Jokasteve, question his ability to do his job and even insult his girlfriend who happened to be in the background. Later in Piglet’s Twitch chat, Jokasteve mentioned that he even received death threats over the incident. Most of this was from people who didn’t even know who Jokasteve was prior to reading the thread, and most who casually came across the comments would likely leave with the impression that Jokasteve is an incompetent douche who pisses off his players for no good reason.

Now, anyone who’s actually spent some time watching Piglet’s stream knows that Jokasteve and Piglet are actually good friends and they mess around with each other from time to time. That’s what friends do. In fact, Piglet had done similar things to Jokasteve previously. However, people love drama and they love a witch hunt, and with Joka being a relatively unknown figure, he made an easy target.

Piglet and Xpecial later made tweets defending Jokasteve and those tweets were then posted onto Reddit. That wasn’t nearly as juicy of a topic however, and it received less than a fifth the amount of upvotes and comments than the one in which it was alleged that Jokasteve was creating a hostile environment. As a result, most people who saw the original post probably never saw the explanation, and still have a negative view of Jokasteve for no good reason.

So next time there’s some random drama where you have no idea what’s going on, take a step back and think about what’s actually going on before raising your pitchforks. A person’s reputation should not be ruined for frivolously messing with a friend.