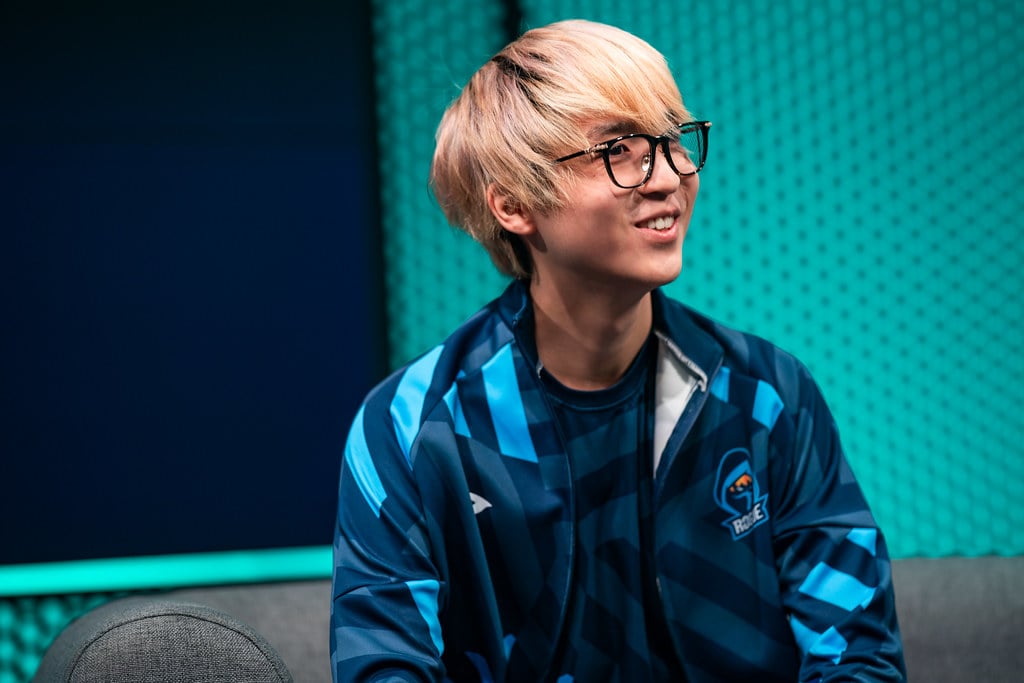 As the LEC camera panned to Rogue celebrating their win over Origen in week seven of the LEC Summer Split, the casters named them the first European team to qualify for the 2020 League of Legends World Championship. The first squad to lock in a spot for the biggest tournament of the season wasn’t the legacy powerhouses of G2 Esports or Fnatic, but an organization that joined the LEC in 2019.

This may be the highest achievement completed for the majority of the players on the team, but it’s a familiar situation for Rogue’s quiet AD carry Hans Sama, who first attended Worlds in 2017. Weeks after locking in their spot at Worlds 2020, Rogue’s excitement was dampened by the Worlds draw show where they were put in Group B, referred to as this year’s Group of Death. The rookies are set to face off against two of the most dominant teams throughout the season from China and South Korea, which are also two regions known for having the highest level of play in the world.

Despite earning the third-highest KDA among LEC players in the recent Summer Split, Hans Sama’s performance is often overlooked in a region packed with talented ADCs. He’s still in the shadow of mythical bot laners such as Rekkles, former mid laner Perkz, and Zven, who now plays in the LCS. He also missed out on a spot on the LEC Summer All-Pro team by only one point, with Excel ADC Patrik earning the most votes in the league.

Hans Sama hasn’t received that much attention since his first Worlds appearance in 2017 when he was still an 18-year-old rookie. Besides getting better results this summer, competing on the Worlds stage and going head to head with some of the best bot laners in Asia, such as JD Gaming’s LokeN and Damwon Gaming’s Ghost, will be the perfect opportunity for Hans Sama to display his skills and improvement as a pro player.

Hans Sama is one of those players who seemed to have his destiny determined when he was just a teenager. Like several of the best European ADCs, he was scouted at a young age and qualified for his first World Championship at 18—the same age as Rekkles and Zven. But four years earlier, he had already become well-known on the European ladder.

The bot laner reached Challenger at 14. He became a star in middle school where he was known as “the Challenger” of League. At 11, he had already earned over 2,000 Elo points by playing in duo queue with his older brother, who served as Hans Sama’s driving force by introducing him to the game and encouraging him to get better. From there, the ADC showed dedication to pursuing his dream of “becoming not only the best French player of League, but also the best in Europe.”

One of the first League pros to notice this young gem was the 2011 world champion from Fnatic, YellOwStaR. “The first time I met Steven was when I was playing in solo queue back then,” YellOwStaR said in an interview about the bot laner. “I still remember that he was 14 years old, so he was really young and he was extremely good.”

Linked by their complementary roles in the bot lane, they played in duo queue for a while. YellOwStaR said he believed Hans Sama had the potential to reach the LCS and become a pro player. Hans Sama quickly became a star in France, but he became a rising star as well in Europe some years later by joining the European Championship Series in 2017.

From Challengers to Worlds at 18

Season seven was the turning point of Hans Sama’s career. It all began when he went full-time and joined Misfits in June 2016. Misfits were the most promising team in Europe. They rolled through EU Challenger Series Summer Split and grabbed the title with a 3-0 sweep over Millenium and joined the EU LCS the next season by kicking Schalke 04 from the league.

This was a big adjustment for Hans Sama, though. He flew to Berlin and left his family, school, and life behind to step onto the European stage.

Hans Sama and Misfits pulled off one of the biggest dream runs in the European league’s history in 2017. They went from unknown challengers to onstage monsters. They placed second in the spring and fourth in the playoffs, and kept on improving in the summer with a stunning performance in the playoffs. They swept Unicorns of Love 3-0 despite losing most of their matchups against them and defeated Fnatic, a team they hadn’t beaten since the beginning of the season, 3-1.

This victory awarded them a spot in the finals and a ticket to Paris, the home of Hans Sama, for a match he’d never forget. On the day of the finals in Bercy, the energetic French crowd wielding baguettes cheered louder for the French player than anyone else, except maybe for Rekkles and sOAZ the day prior. The crowd even sang him a birthday song after he turned 18. Even though Misfits lost to G2 with a disappointing 3-0 result, Hans Sama’s career reached a turning point at this moment and the team had already qualified for the World Championship.

Misfits came in as underdogs at the biggest tournament of the season, but they survived the group stage and almost upset three-time world champions SKT T1 in a 3-2 match. In only one year, Misfits had gone from the lowest official league to standing up to a legendary team in a 10,000-seat stadium in China.

Hans Sama has made the climb once before and will now attempt to improve on his previous performance this year.

The eagerness to prove himself

Coming into the 2020 League World Championship, Hans Sama has a new narrative. In the past, the pressure on his shoulders was eased by the fact that he was a rookie on a team of underdogs. But this year, he’s subject to more expectations. On one hand, he’s entering the competition on an underdog team once again, having been put in the Group of Death with LPL runners-up and spring champions JD Gaming, LCK Summer champions Damwon Gaming, and Taiwanese representatives from the play-in stage PSG Talon. JDG and Damwon are two favorites to hoist the Summoner’s Cup this fall, whereas Rogue weren’t expected to even reach Worlds ahead of the LEC Summer Split before their results started skyrocketing.

But Hans Sama isn’t a rookie anymore. He and support Vander are the only players who’ve already stepped onto the international stage for the biggest tournament of the year. They share the pressure of taking control of Rogue’s matches and helping their teammates adjust to the tournament. Rather than giving their all with nothing to lose, European fans hope to see the duo step up for their team and be decisive, even ahead of their most difficult matches of the season—if not their careers. Hans Sama and Vander’s experience on the Worlds stage will be crucial to Rogue.

Displaying a convincing performance is even more important for Hans Sama after he joined Rogue for a fresh start this year following two disappointing seasons with Misfits. They ended the 2018 season in the middle of the LEC rankings and missed Worlds due to a loss 3-2 against Splyce in the Regional Finals. Things got even worse in the 2019 season when Misfits performed inconsistently and went through questionable roster changes, finishing eighth in the spring and second-to-last in the summer.

Hans Sama is still frustrated by those years, saying he “hadn’t the liberty of playing in his own way” on Misfits, which he was able to do by joining Rogue. But the 2020 season offered him a new opportunity to show his aggressive playstyle and prove that he belongs as one of the best ADCs in Europe—and, maybe, on the international stage.

Before facing off against two giants, Rogue will kick off their Worlds 2020 journey against PSG Talon, who rolled through the play-in stage, on Oct. 3 at 5am CT.