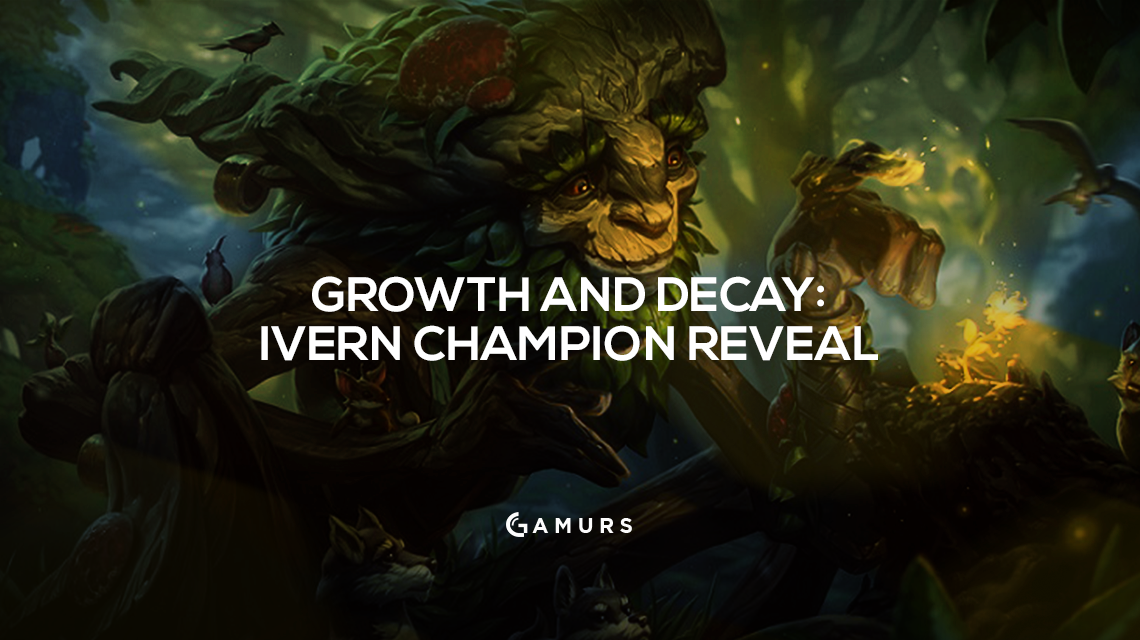 The jungle on the rift doesn’t always have to be about killing, you know. Are you tired of endlessly walking through your jungle and slaying the same nine creatures over and over? Well don’t worry, Riot has provided the perfect solution to your dilemma in Ivern, The Green Father.

Being one with the forest, quite literally, Ivern brings a very unique playstyle to the table. After looking at his kit, you’ll understand why.

Because of how interesting his kit is, we’re going to be looking at his kit out of order.

W – Brushmaker: Just as the ability states, Ivern creates a brush. What is interesting about it is that he can spawn this brush anywhere, as long as it is within his cast range. It comes with three charges to if Ivern wants to, he can create a line of brushes across the lane/river. It also has a passive to it that gives Ivern ranged auto attacks for two seconds after entering/leaving a brush. You can make some sick outplays with this ability by making use of the vision mechanics as well as Ivern’s passive on his W. This also synergizes really well with Rengar and Teemo, for obvious reasons.

Q – Rootcaller: Ivern launches a projectile forward that collides with the first enemy hit and does some damage. The first enemy hit is rooted and  any enemy hit by the projectile gets a debuff on them that allows all of Ivern’s allies to instantly dash to the enemy to get within auto-attack range, meaning someone like Darius will be in melee range while someone like Caitlyn will be at long range. The amount of chase this ability gives to Ivern and his allies is immense, assuming Ivern can actually hit the skillshot.

E – Triggerseed: This ability is a shield that lasts only two seconds, but explodes after the duration, slowing and damaging all nearby enemies. Despite the shield only lasting two seconds, it is made up for by the fact that the shield is huge and slows enemies by a hefty amount afterwards. The cooldown is fairly long though, so you won’t be able to spam it like Janna would.

R – Daisy!: Ivern summons a huge rocky friend named Daisy. This minion acts very similar to Tibbers in that he can control where it goes and who it attacks. What is special about Daisy though is that after every third auto attack she successfully gets on an enemy champion knocks them up and shoots a line behind them that also knocks up. She doesn’t do much damage but when left unattended, she can get several procs of her knock-up off and cause havoc in a fight.

Passive – Friend of the Forest: This is what makes Ivern, Ivern. He can’t attack any jungle camps. Instead, he marks them, and after X amount of time, he can click on the camp again to take the camp. Essentially, instead of killing the camp, he “releases” them. What makes this really interesting/good, is that he can smite a camp that he has marked and take it instantly. Post level six, when Ivern marks a camp and takes it, it leaves another buff on the ground for someone to take. It buff that drops is identical to Iverns, essentially duplicating the buff.

I don’t think Ivern will be very good in a competitive environment. Against a strong jungler who is good at counter-jungling, Ivern won’t stand a chance. His 1v1 isn’t strong pre-six, and his mid-game is lackluster. Come late game, he is very strong given all of his utility, but is still outclassed by top tier junglers like Gragas and Rek’Sai.

I can see Ivern being a decent support, especially when paired with a carry who doesn’t have much engage potential. He would also make ganks really easy if he lands his Q. You could even take Smite on him to have two buffs of each for the team, but you would have to sacrifice Ignite or Exhaust during the laning phase. Overall, he wouldn’t be a terrible support, but I still don’t think he would see much competitive play, if any.

Ivern is a very unique champion and a fresh face compared to the last few champions. I can’t quite tell where he would be strong yet, but regardless, I think we will be seeing him quite often in the next coming months. Maybe the pros see something in him that I don’t quite see and he will see competitive play after worlds. Only time will tell.

What are your thought on the new champion? Let us know in the comments below or by tweeting us @GAMURScom.