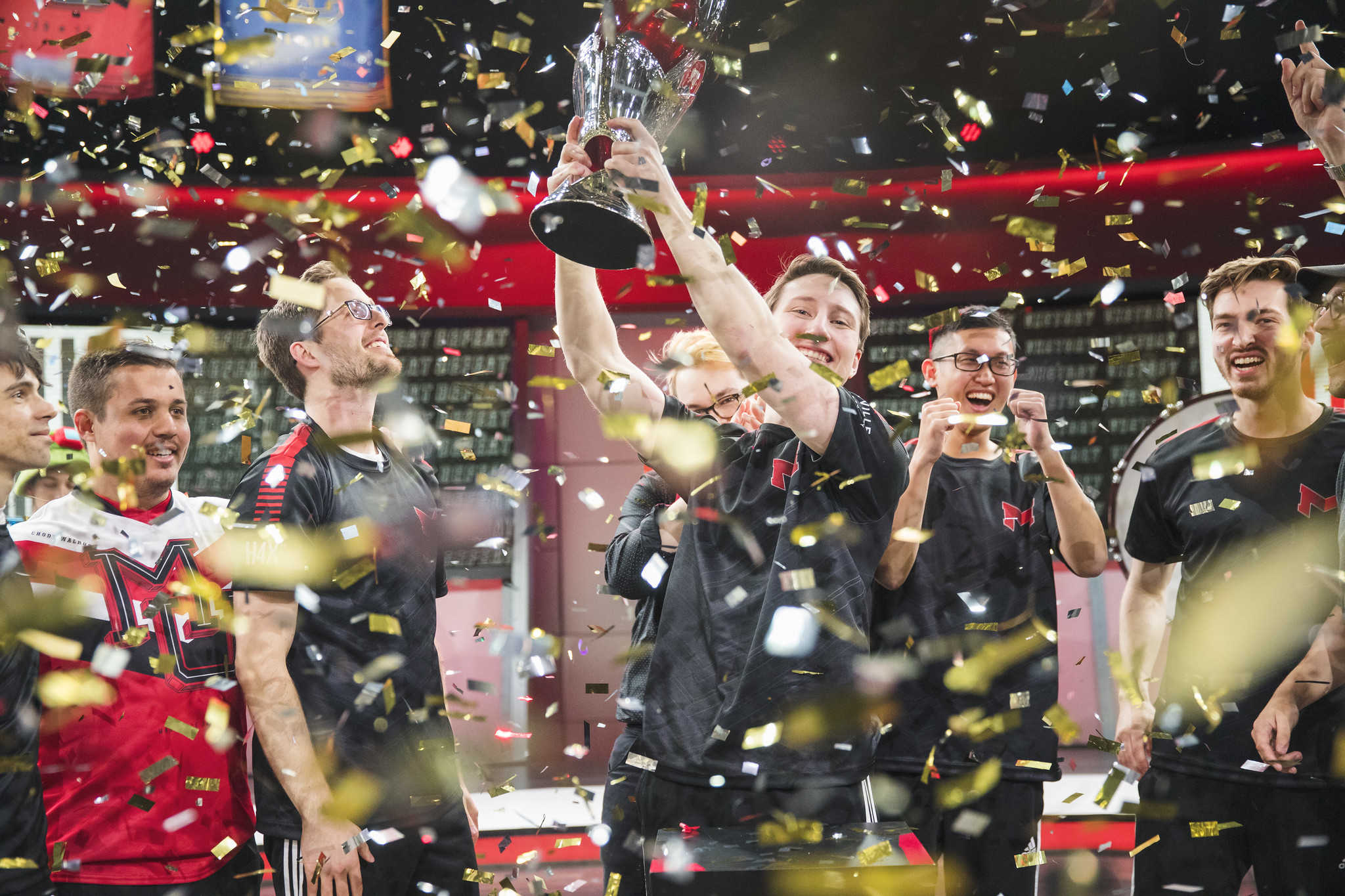 The collegiate League of Legends scene is often overlooked in favor of Academy and the LCS, leaving many talented players relatively unknown. But this split, two players have gone directly from being champions in the collegiate scene to the LCS stage and are looking to prove that collegiate players deserve more spotlight by holding their own against NA veterans.

Top laner Aiden “Niles” Tidwell and jungler Ethan “Iconic” Wilkinson signed with the Golden Guardians ahead of the 2021 LCS Spring Split. This is one of the few times in LCS history that any player has been promoted to the LCS out of the collegiate scene since it’s typical for players to start their careers in Academy to learn the basics of pro play.

Dot Esports talked with the Golden Guardians rookies about their time in collegiate following their first stage games in the LCS Lock In tournament, as well as what their performance in the region means for all collegiate players looking to go pro.

An extensive history in collegiate

Niles and Iconic may be joining their first LCS team, but they’ve played together for quite some time. The two were teammates on the Maryville University League team for two years, helping the university grow its collegiate esports program into one of the staple programs in the U.S.

Niles made his debut with the team during the early 2019 spring season, then was accompanied by Iconic when he joined the team in late summer that same year. In just a short time, the pair’s comfort with one another led them to tackle some of the biggest names in the scene.

Prior to the duo coming together, Niles helped lead Maryville University to victory in the CLoL 2019 Championship by sweeping almost perfectly through the competition. This remains the biggest win in the history of the school’s League team and was only the start of all of the immediate success Maryville found thereafter.

The team participated in numerous Scouting Grounds Circuit events throughout 2019 where they competed against other amateur teams to qualify for the 2019 NA Scouting Grounds event. Niles and Iconic’s debut in the circuit’s third open qualifier led to a second-place finish and a path to the playoffs. During the finals, they ended up in the third seed, which didn’t result in Scouting Grounds qualification but gave them more national recognition.

“Being able to compete with your collegiate team into the Scouting Grounds Qualifying Circuit got our names out there just a little bit more,” Iconic said.

This didn’t deter the team, however. Just last year, the team won numerous invitational and regional playoff tournaments, including a top seed in the Riot Games-hosted North Conference Playoffs, which served as one of the replacements for the cancelation of the regular CLoL season.

The 2020 Scouting Grounds Circuit looked a lot different for the Maryville squad. With Niles and Iconic now defining the roster, the team started playing more consistently and their dynamic became much more apparent. It wasn’t until the fourth Open Qualifier that the team officially qualified, where they once again competed against teams that had bested them only a year prior.

The team failed to come in first place at the Scouting Grounds Playoffs, however, falling to ANEW Esports and 100 Thieves Next. But that didn’t stop Golden Guardians from noticing Maryville’s top laner and jungler and signing them both to the team, leading to the current formation of the roster.

“I was super surprised and shocked [that GG wanted me in the LCS]—we didn’t even win the entire thing,” Iconic said. “When I was in school and playing in these tryouts, I told myself I’d be playing in Academy if I played well.”

An unexpected jump to pro play

Neither Niles nor Iconic thought they’d skip over the Academy scene completely following Scouting Grounds, but the benefits and experiences that they’ve received thus far have prepared them for the challenges that come with the LCS.

“You take it for granted that you’re going to have to prove yourself in Academy,” Niles said. “Our coach, Inero, and my positional coach, Swiper, have been resources that I don’t get if I’m playing in Academy, and they’ve already helped me with so much.”

Playing in Academy normally enables players to learn the ins and outs of the LCS prior to competing on the main stage. The circuit has recently been in the spotlight for the consecutive wins of C9 Academy as well as C9’s success in bringing those stars to its main roster. Niles and Iconic skipped the trend of going from collegiate to Academy that includes players who are now a part of the LCS, such as Soligo and FakeGod.

Iconic said Maryville’s participation at Scouting Grounds was a major way to get his name out in the professional League scene and that some of the greatest players in NA may be blocked from advancing into pro play due to the lack of attention they get. “There’s a lot of good players in amateur that deserve chances to play at a higher level, a lot of it is on scouting and giving players with not a lot of experience the chance,” Iconic said.

The LCS Lock In tournament marks the first time fans will be seeing many of NA’s newest players who have been given a chance to compete. The rosters featured in the tournament are mostly the same as the ones that will be used during the 2021 Spring Split (aside from visa issues), but the Lock In poses no threat to the teams’ places in the standings. Instead, they’ll be displaying what fans can expect to see from them throughout the year.

Niles and Iconic made their debut on Golden Guardians against CLG, one of NA’s oldest teams consisting of numerous veterans, on Jan. 15. Since the team is full of players fans may be unfamiliar with, many questioned the chances this new Golden Guardians roster had. But both Niles and Iconic held their own throughout the match and came out on top with the rest of their team.

“Going into our match with CLG, I was super nervous because everyone’s expectations of us were that we were gonna play super badly,” Iconic said. “I didn’t want to make them feel like their opinions were valid. I was just so relieved once we played like how we did in practice in the match, and it was pretty fun.”

The first weekend of the LCS Lock In might have put Golden Guardians at 1-2, but they had the opportunity to fight against two of NA’s most successful teams: TSM and Team Liquid. In particular, Niles and Iconic found themselves facing some of the most acclaimed top laners and junglers in LCS history.

Within just the first weekend, Niles and Iconic have become two of the most talked-about rookies in all of the LCS. Niles’ Gangplank was a welcome surprise for fans on the first day of the Lock In tournament. But for those who were familiar with his time in collegiate, this pick was for comfort and to showcase his sheer skill. Iconic had the highest KDA of any player in the LCS in his first two days on the stage, already cementing himself as one of the biggest threats on any NA team and a contender for best jungler. Both Niles and Iconic are already showing they’re in the running for Rookie of the Split.

Looking ahead to the remainder of the Lock In event and Spring Split, Niles and Iconic are hopeful that Golden Guardians will continue to prove the doubters wrong and stand strong against some of NA’s best players—even if they believe their way to the top will be a “marathon.”

Setting an example for the future

Unlike other NA organizations, Golden Guardians has formed its roster heading into the 2021 Spring Split to highlight players without previous LCS experience, including Niles, Iconic, and mid laner Ablazeolive. The org’s lineup is rounded out by LATAM veteran support Newbie and LCS veteran ADC Stixxay, who have helped the rookies find their footing on the stage.

“We had our early game goals, and we’ve been hitting them so far,” Niles said. “We’re making sure that things we’ve been working on in practice we translate onto stage. Wherever that takes us, as long as we’re doing that, it’s a win of a tournament for us.”

Niles and Iconic have already captured the attention of LCS viewers in their short time on stage and are looking to cement themselves as dominant opponents on the Rift as the year continues. At the same time, they hope that being collegiate prospects will push more people to invest in the extensive collegiate and amateur scenes and notice the blossoming talent that may have an impact on the future of the LCS.

“I think it’s really important that me and Iconic do well, because we’re sort of the first impression that people will have [of collegiate],” Niles said. “We’re kind of ambassadors, in a sense, of collegiate, and amateurs in general.”

Golden Guardians will look to showcase the potential of its rookies as the Lock In tournament continues up to the start of the Spring Split. They’ll face tough opponents in the coming weeks while they fight for the $150,000 prize, including this weekend’s battle against 100 Thieves. No matter the challenge, it seems like Niles and Iconic can stand their ground against some of the best players the LCS has to offer.