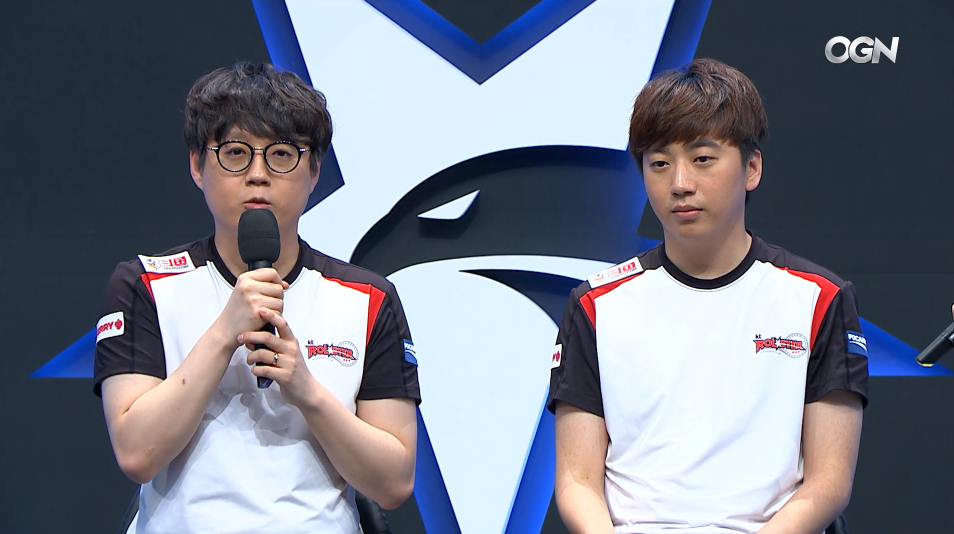 Week two of the Summer Split hadn’t been very kind to KT in terms of their gameplay. KT began the week with a 2-0 loss to back-to-back LCK champions KINGZONE DragonX, and then they played a messy match against bbq Olivers that they should have cleanly won. Against Gen.G, though, KT made up for their previous matches with two dominant game wins.

Gen.G’s theme today was scaling compositions. In game one, Gen.G tried to challenge KT’s Xayah and Rakan with Kog’Maw, a champion that needs both time and items to become a deadly minigun. Gen.G hoped to get Kog’Maw past the 30-minute mark where he could dole out tons of damage while mid laner Song “Fly” Yong-jun’s Lulu shielded the AD carry.

But KT Rolster quickly shutdown Gen.G’s plan before the game hit 30 minutes. KT found an early lead in the bot lane after a gank from jungler Go “Score” Dong-bin. KT continued to push that bot lane lead and simultaneously used their duo to secure various objectives. Their lead culminated in a teamfight by their blue buff, which they won without any casualties. As a reward for the teamfight, KT were allowed to freely take Baron—and they used this buff to close out the game.

Gen.G doubled down on scaling in game two by drafting a gold-funneling team comprised of jungle Kai’Sa and mid lane Braum—similar to a team composition used by Griffin in their victory over SKT yesterday. Kai’Sa needs time to build her core items and evolve her abilities before she can decimate enemy champions. But once again, KT defeated Gen.G before their composition could hit its power spike.

KT stuck with the same strategy as game one and found their lead through the bot lane. They took Gen.G’s bot lane outer turret by seven minutes and then swapped their duo to the top lane, while top laner Song “Smeb” Kyung-ho pressured the bot lane inner turret with Aatrox.

Gen.G, who still hadn’t reached their Kai’Sa power spike, had no way of stopping KT’s side lane onslaught. Gen.G later fell in game two’s first teamfight when they were forced to try to stop KT’s 23-minute Baron attempt. And once KT had the Baron buff, they became too strong for Gen.G to defend against.

Now with a 3-2 match record, KT will prepare for their first “Telecom War” of the summer, which is set for Tuesday, June 26.