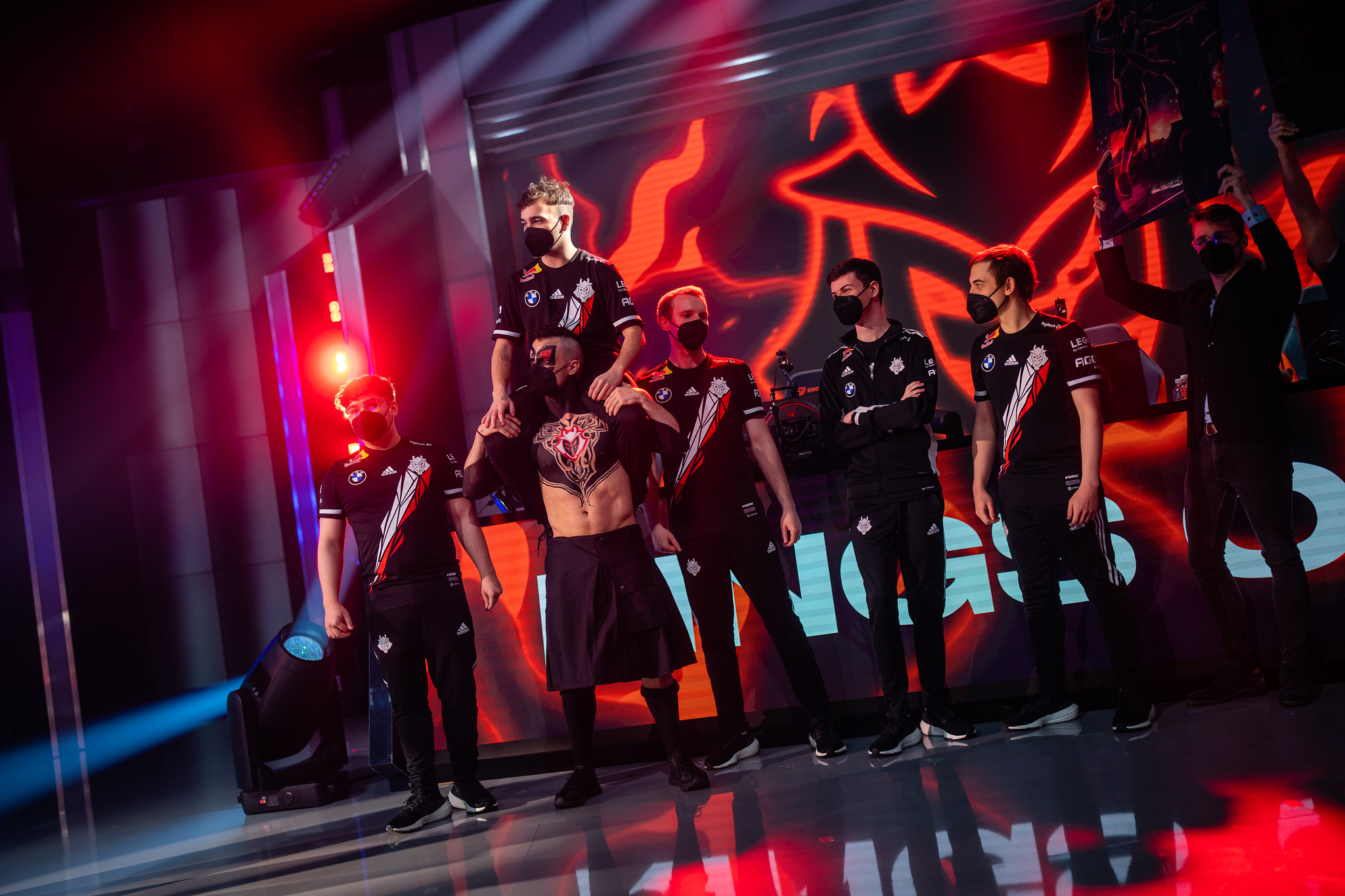 G2 Esports crushed Fnatic under overwhelming pressure and won the LEC Spring lower bracket final with a 3-0 sweep today. After two years without an audience, G2 delivered a convincing performance in front of the LEC fans, thus advancing to the Spring Split Final against Rogue tomorrow.

Anticipations were high for today’s matchup, and for more than just what was at stake. Not only was it a stage for the legendary rivalry built between the two teams over years, but also because G2 were sent to the lower bracket by Fnatic, who won their previous encounter 3-1. However, G2 crushed Fnatic’s dream of reaching the LEC final, as well as fans’ hopes to hear Silver Scrapes, with an overpowering dispatch of League technical ability.

Fnatic presented themselves with a full teamfight composition in game one, taking the first blood in the first minutes of the game thanks to Jankos’ gank in the bot lane. The jungler’s proactiveness in the early stages of the game earned advantages for his team, who increased the lead across the map until the 15-minute mark. Despite Fnatic’s attempt to gain map control and awareness, G2 secured one tower after another, one neutral objective after another, until only their opponents’ Nexus stood. G2 commanded game one uncontested, kicking off the series with a clean game plan.

The difficulty in adapting to the provocations and actions of their opponents led Fnatic to defeat in the first game. But the second game saw them being more proactive in the early game, maintaining a thin gold gap between them and G2. Fnatic had a response to G2’s actions every time, balancing the losses in the top lane by taking the tower’s plates on the bot side. But with a fight in the bot lane, G2 imposed a new rhythm to the game. BrokenBlade survived a one-vs-three attack, scattering Fnatic members who were then taken down by the Samurai.

The early game in match two was promising for Fnatic, but from the mid-to-late stages, G2 built a wall with the objectives taken from Fnatic, separating themselves from their opponents. First was the Hextech Drake’s soul, then the Baron buff, and lastly, Fnatic’s base. An auspicious second game for Fnatic turned into another dominant display of strength by G2, who brought themselves to match point with the win.

With everything on the line, Fnatic presented themselves in what could have been the beginning of a reverse sweep. Despite G2 getting early-game advantages again, Fnatic did not give up, punching back harder every time they got hit. But it was simply not enough.

Before the 20-minute mark, G2 had control of the map and a gold and kill lead over their opponents. Fnatic initiated fights and had a quick response to G2’s mistakes. They fought as a team and stood tall. While Fnatic pushed to enter the base of G2, Caps and BrokenBlade took advantage of a Fnatic push and teleported to destroy two towers and the inhibitor in Fnatic’s base. This caused Fnatic to reset their advance and head towards what would be the last dragon of the game. With the Infernal Soul at their disposal, Fnatic decimated the health of the neutral target, but Jankos landed the last blow and turned the momentum again. Thanks to Jankos’ steal, G2 took the Baron buff and besieged their opponent’s base, patiently waiting for the right moment to strike. Fnatic had to engage, but they were cut down by order of Flakked’s feathers and Jankos’ lightning bolts, ending the game with a quadra kill.

G2 closed the match swiftly and will rise to the LEC Spring Final after defeating Fnatic. They will face Rogue after not dropping a single game in the lower bracket. G2 has rebuilt its team with a strong core in the mid-jungler pair, but this series has highlighted how much every single component of the roster has grown and has the potential to lift the LEC trophy.

On the other hand, Rogue have avoided facing G2 since the end of the regular season, choosing to face Misfits in their first Playoffs match. Even though Rogue defeated G2 twice in the regular season, the team they will meet tomorrow is not the same they faced in the past months.

After today’s crushing, defeat Fnatic are eliminated from the competition. The last match of the LEC Spring Split, however, still promises to be one to remember. The team with the most trophies won in the region will battle the team that most wants to win the crown. And, after tomorrow, only G2 or Rogue will be named the LEC Spring Split 2022 Champions.