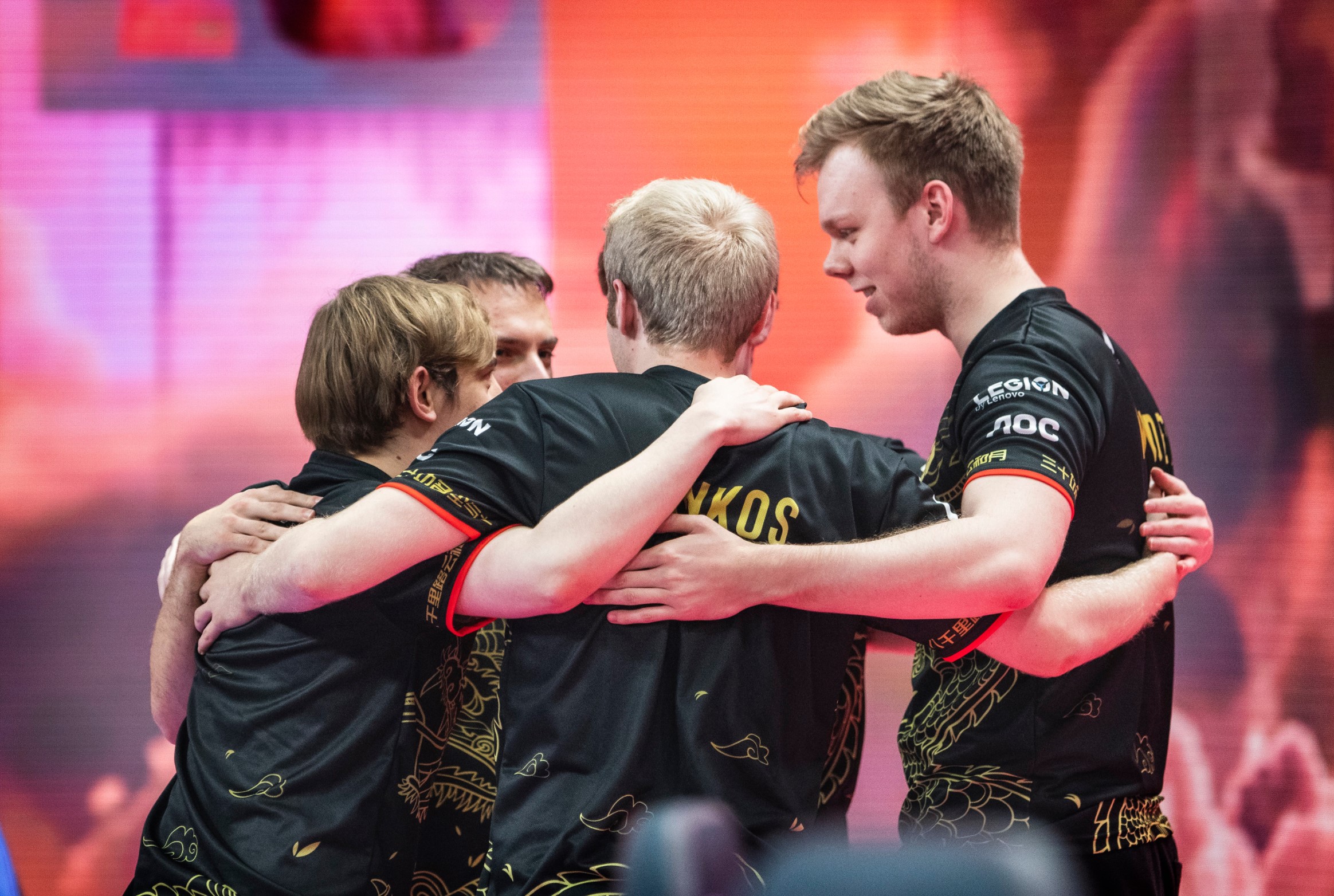 For the last three years, G2 Esports has been steadily climbing toward the pinnacle of professional League of Legends. After reaching the semifinals of the 2018 World Championship, the team turned around the next year and secured a berth in the tournament’s grand finals. Now, with just one more accomplishment left on the table for the organization, G2 has its sights fully set on capturing Europe’s first Worlds title in nearly a decade.

At the helm of the operation is the organization’s CEO, Carlos Rodríguez, a brazen, outspoken leader and perpetual peddler of G2’s success. In 2020, he believes that the team can finally get to the top of the mountain and achieve its ultimate goal of finally winning Worlds. “Our actions match our ambitions,” he told Dot Esports. “Many teams will say that they want to win Worlds, but their actions don’t match their ambitions. Ours do.”

But ambition can only get a team so far. For G2, naturally progressing toward a World Championship isn’t something that happens overnight. And since they find themselves in the middle of an uphill battle after finishing second in Group A at this year’s tournament, G2 will most definitely need to make a slew of adjustments before they prepare to run through a bracket lined to the brim with teams that are just as capable as them.

Even though G2 are in an unfavorable position as a second seed heading into their quarterfinal matchup against the LCK’s Gen.G, the LEC champions have been in a spot like this before. In fact, just last year, G2 made a run to the finals at Worlds after finishing second in the group stage as well. But between then and now, things have changed for the squad. The team has learned how to “deploy its energy,” according to Rodríguez.

Admittedly, Rodríguez claimed that G2 are typically “a weak team” during the opening phases of international events. “But as the tournament goes on, we become better and better,” the team’s owner said.

And for a team comprised totally of veterans, one would expect G2 to be able to adapt accordingly throughout the course of any given tournament. The team showcased its ability to do so during Worlds 2019. With a similar task ahead of the roster this year, the expectations are accordingly alike.

In fact, things couldn’t be more alike. G2, with an identical roster from last year’s tournament run, are surrounded by LCK teams on their side of the bracket—just like they did at this time last year. With the narratives pushing perfect symmetry on a year-to-year basis, there’s no reason to believe that G2 shouldn’t be able to adapt appropriately. To further that point, Rodríguez believes his team is the “best in the world at adapting.” With a near-identical slate in front of them, G2’s players—all of whom are returning to the international stage for a shot at redemption—will most definitely be tested on their ability to adapt in the coming weeks.

What makes G2 stand out, in particular, is its roster of five veteran players. Normally, teams will elect to develop at least one budding rookie to “future-proof” the starting lineup. But not G2. Instead, the organization has been able to secure four consecutive LEC championships over the course of the last two years on the backs of some of the most experienced players in the league.

Across G2’s starting five, the roster sports a combined total of 27 seasons of professional experience, with Jankos—a veteran of nearly seven full seasons—leading the way. And while experience may seem like a boon for the organization on the surface, it’s fair to say that G2 are one of the only teams in Europe, if not the world, taking this sort of approach.

Overloading a roster with veteran experience is a practice that leagues like the LEC have largely abandoned. As G2 holds down the fort with five stalwart veterans, teams like MAD Lions, Excel Esports, and Team Vitality are getting younger across the board. Soon enough, the influx of young talent into the LEC could surpass G2 and its bevy of veterans.

According to Rodríguez, “the best possible team has a combination of experience and youth.” And while G2 might have the experience part nailed down, it’s tough to look at the organization’s roster and think of the term “youth.” Still, with a ridiculously young roster in terms of age, the practiced members of G2 have produced an accomplished unit over the span of the last few years, with room for development still present to come in the near future.

It’s important to remember that veteran experience, while valuable, could sometimes be deceiving. In the case of G2, the five seasoned players who make up its roster have an inordinate amount of experience under their belts. But when it comes to age, there’s still plenty of room to grow.

The average age of a G2 player is just over 21 years. Despite all of the experience that the players have accumulated across their careers, much of the G2 roster would still be considered extremely young in the eyes of the general public. It’s only when they’re viewed as professional League players that the prospect of longevity even becomes part of the discussion.

Rodríguez thinks the fact that his players have already achieved so much success at such a young age gives off “the perception that they are older than they actually are.” As of today, Perkz and Jankos are the only members of the roster to have even celebrated their 22nd birthday. Caps has nearly four full seasons of competitive experience to his name while already appearing in two Worlds finals all before the age of 21.

While the achievements of G2’s incredibly talented players feel like they’ve spanned lifetimes in the greater context of professional League, it’s still important to remember that not that much time has passed off the Rift since players like Caps and Perkz were considered rookies in their own rights.

Perkz, in particular, is a fascinating case study in player value and arguably one of the most successful role swaps in the history of League esports. In the words of Rodríguez, he’s “solo carried in two roles,” sacrificing his spot in the mid lane to put the finishing touches on G2’s all-star roster. He’s the core around which G2 is built, having survived almost three complete roster rebuilds in his five years as a part of the team. And in those five years, he’s become one of the greatest European players of all time.

But Perkz’s famous lane swap at the beginning of 2019 definitely raised a lot of eyebrows in the European scene—namely, that G2 would rather have a veteran play in an off role than invest in rookie ADC talent. While Perkz is by no means the single best-performing ADC in the LEC in terms of individual statistics, he’s a successful part of one of the most dominant teams Europe has ever seen in a role that he only started playing professionally at the start of 2018. In the 2020 LEC Summer Split, he averaged a deficit in gold, experience, and CS at 10 minutes against his lane opponents, according to esports statistics site Oracle’s Elixir. His damage per minute, while not the lowest in the league, was nothing particularly impressive.

Statistics alone don’t tell the whole story, though. What he lacks in individual laning prowess (unsurprising for an off-role player), he makes up for in game knowledge and communication. These intangibles, inaccessible to fans, are so much of what makes a team successful. Perkz has “led the team as a captain,” according to Rodríguez, achieving the greatest level of international success Europe has ever seen. Perkz is an essential cog in G2’s perfectly-oiled machine and his growth in the European scene has been documented over five and a half years of competitive experience.

When combined with the younger members of the team in Caps and Mikyx, he provides the yin to their yang—a responsibility and calmness that tempers the “younger spirit and intrinsic, organic motivation” of G2’s hotheads, as Rodríguez describes it. His veteran status isn’t merely a meaningless label that’s attached to him. It’s the result of “playing the game for so long at the highest level,” of “seeing everything and beating every team” Rodríguez said. On a team famous for their fun-loving personalities, he’s a stabilizer and a rock.

This veteran leadership will serve G2 well at the World Championship. They’ll need a clear, calm head on their shoulders if they plan on showing up on behalf of the LEC. For G2, this question of European representation is different than it’d be for many other teams in the LEC since they’re one of the two teams responsible for the prestige Europe has gained internationally within the past two years.

With Europe fielding a fourth seed this year for the first time in Worlds history, performances from the region’s representatives have been wildly inconsistent. Speaking on the other European teams at Worlds, Rodríguez said he has “no reason to root for them.” The fact that they “happen to share the same region as [G2]” is simply “not enough motivation to go out of the way to root for them.” He’s a man who’s solely focused on the performance of his own roster.

If European teams put on a strong showing internationally, “I would have a higher sense of pride in my region,” Rodríguez said, mainly because it proves that G2 are able to reach the pinnacle of their region against an incredibly high level of competition. When G2 were “just stomping Europe as a whole,” the competition became “boring” for both Rodríguez and European fans. “If you’re stomping every game it’s hard for people to be true fans,” he said. “But I think that once somebody becomes a fan of G2, it’s impossible for us to lose them.”

The power of G2’s fandom, especially at these international events, is undeniably strong. Rodríguez attributes this strength to the organization’s “attention to detail and empathy towards each and every fan.” Twitter memes aside, G2 has cultivated a fan base that “makes people feel like they essentially have a home here.” And those fans have stuck by the team through some of the greatest moments of the players’ careers.

G2 as an organization has everything to prove at the 2020 World Championship. From controversial roster moves to shaky splits in the LEC, they’ve received criticism at every step of the way throughout this year and will have to face some of the toughest international competition if they want to go beyond their 2019 success.

But Rodríguez remains hopeful with the same easy confidence that he’s shown all throughout his time at the head of one of Europe’s most successful esports organizations. “If there’s a tiebreaker situation, I can’t tell you if we’re going to win or lose,” he said. “But I can tell you we’re going to have big balls when playing the game.”

These “big balls” might be just what is needed to push G2 to their second Worlds finals appearance in two years. Their knockout stage journey begins with a match against the LCK’s Gen.G on Oct. 18 at 5am CT.