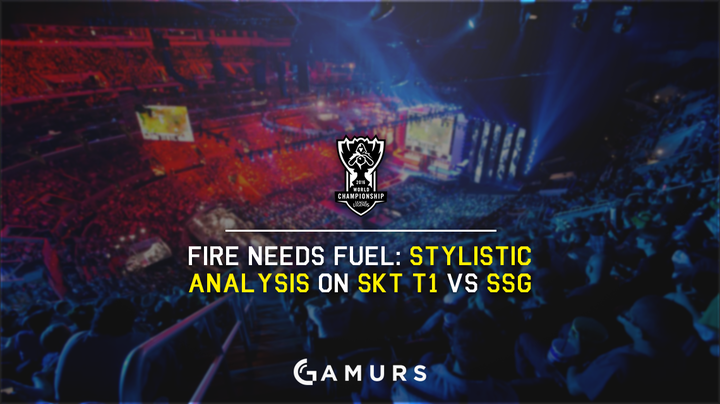 Although it is often clear in an intuitive sense, pinpointing what exactly defines a team or player as either “aggressive” or “defensive” is not an easy task. If you had to assign one of these tags to Henrik “Froggen” Hansen and another to Marcin “Jankos” Jankowski, there would probably be little-to-no disagreement over which is which. However, in order to comprehend how these concepts shaped the 2016 World Finals, we need a more formal approach.

We will say a play is good if the expected average outcome is positive. Considering all the possible good plays, we define a play as more aggressive the bigger the possible punish(#) for this play is if it doesn’t work out(@). On the other hand, a play will be more defensive the smaller the possible punish is if the play fails. Not every player or team can be classified like this, you can mix your play or have various styles, but now we have a rough idea of which is which. If a team or players leans a lot towards one side or the other we have a more clear idea of what our intuition is evaluating.

It is important to keep in mind that these criteria is independent of skill level, both styles present themselves across all levels of play. Both styles have advantages and weaknesses. Aggressive plays are typically more proactive than defensive ones, giving a good aggressor team bigger control over the tempo of the game. Aggressive play demands constant crisp execution, being that aggressive plays have higher self-punish ceiling. An aggressive team misplaying frequently will have very short-lived games and few victories. This cushion is bigger if the play is low-risk. The more aggressive plays a team is able to execute, the wider his range of options at any point in the game is, making it a more unpredictable team, which makes the range of good plays for the opposing team smaller.

Intuition wouldn’t suggest this bigger available pool of good plays at first approach, but lets take a closer look: Every team has a limit to the practice they can acquire. Practicing more aggressive plays would mean defensive ones are left unpracticed and thus removed from the pool of good possible plays; but the reality of the game is that, more often than not, the aggressive good plays in a given moment are harder to execute than the defensive ones, making it so that a team that has mastered aggressiveness has more available plays overall. It is also the case that the pool of good aggressive plays is, almost at all points in the game, bigger than that of the good defensive ones.

Often times we find examples of aggressive teams not being able to execute defensive plays, but this is usually derived from lack of understanding of the game than an inherent problem of the style. Since aggression gives the option to punish a wider range of mistakes and requires very good mechanics, it is almost always the preferred style of those most skilled at the game. Since being skilled and having a good comprehension of the game are not necessarily paired, we find ourselves with very aggressive teams or players who cannot execute this other part of the style.

We’ve established that aggressiveness gives you more control over the tempo of game, more plays available at any given time and means to punish more mistakes, is it the best style? What does a defensive style offer? How is this tied to the finals?

Where aggressiveness was something drawing in the more skilled players, defensive now draws the more knowledgeable. Both styles need both skills to be at their best, but the backbone of the style is, in the first one, mechanical prowess and, in the second, deep understanding of the game, specifically the macro game.

Let us take a look back at Lee “Faker” Sang-hyeok vs Froggen when they faced 1v1 in All-Stars. This game could be won purely from a defensive perspective, stacking small advantages and finally winning by CS lead. That is not the nature of Summoners Rift. One must, at some point in the game, make proactive aggressive plays in order to destroy the Nexus, assuming that the opposing team is close to your level and you are not just wrecking them skillwise. You can’t just sit back and stack small advantages, because the concept of full equip exists, and thus you will never make the difference in resources big enough to have a victory without risk. From this we can conclude that in order to play a good defensive style, one needs to stack enough advantages from small risk plays, so that when you reach the point where aggressiveness is unavoidable, you find yourself in the best possible position. Identifying which plays to take and which not to take, if it has more expected average win taking a risky play now or getting to the lategame with smaller advantage, and all this small but crucial nuances, is the backbone of being a good defensive team and while mechanics are essential as well, I would consider this the more defining and essential skill.

The advantages of playing defensively are plenty. You can roll with fewer mechanics since, by definition, you favor taking low risk plays, and they are usually given in form of a 4v5, ganking an opponent who is down summoner spells, and other situations where the risk of you getting punished if you do missplay is fairly lower than in the aggressive plays. Since usually low risk is correlated with bigger mistakes by your opponent, crispness in play is not as key. Choosing to attack only when bigger mistakes happen gives what might be the most important advantage of a defensive style, it almost always minimizes variance. When someone is facing a good defensive team and losing, you would think they are getting strangled. The defensive team sets its plays up in such a way that very little counterplay is available to the opposing team. This of course is not as easy as it sounds, we are talking about players with the best game sense in the entire world, the skill is not to play defensive, it is to visualize plays that let you do so and build enough of an advantage. Its much harder to get upset wins over a defensive team than over an aggressive one.

Lastly, and probably the most important point of all when talking about both styles, is that defensive is the natural style that the team who is behind needs to play, assuming both comps scale equally since relative gold difference shrinks over time, because the leading team has to use the gold advantage or carry it until it doesn’t matter anymore.

What About the Finals?

And how does this tie to the finals? Well, it’s in the title, fire needs fuel. SKT needs that late game opening that Samsung was not giving them. That’s why, even though they were the superior team and everyone predicted them to win, they had such a hard time closing. If the other team knows how to avoid making a big enough mistake and you are not able to take a big enough gold lead, you have to take a more aggressive approach, using plays with higher possible loss. SKT are the better team in terms of raw skill, yet in order to take advantage of this they had to play out of character, which obviously was a huge impairment.

Their lack of prowess in this style costed them a huge throw in game three. Samsung didn’t look that good because SKT are more skilled and constantly took leads over them but, since the leads and the mistakes by Samsung were not big enough, SKT was forced to go into a more aggressive style, which made them look often times undecided and uncoordinated. They were completely out of character and even made it so that Samsung could take the driver seat in game four without them being able to switch it back to their always fantastic defensive style. In the end, SKT came victorious, but this goes to show how difficult it is to abuse skill difference in mirror defensive matchups if the skill gap is not huge.

So, is this the only defining factor of the series? Of course not, but it was point that has to be made. A game can be a clown fiesta, but when every game looks scttered it’s very likely that something weird is going on, and this is my theory of what it is.

(#)Remember here that we are talking only about the good plays. Letting a tower fall for no reason has very high possible punish, but since it is obviously a very bad play, our criteria doesn’t apply and this does not classify as an aggressive play or decision.
(@) One should be careful when evaluating the best of the best, since it is a criteria based purely on intuition. A play made by Faker, for example, might seem more aggressive than it actually is. Since our intuition is not as good as his on measuring himself, we might be inclined to think that the risk was greater than it actually was, if it even existed at all.

What are your thoughts on the general styles of play in League of Legends? Let us know in the comments below or by tweeting us @GAMURScom.